The Master of Metaphysics is The Movie Queen – Chapter 131

This time the company specifically told Gong Qingyao to walk slowly on the red carpet so that reporters could take pictures. There was also the interview corner. The organizers had arranged a lot of reporters, so even if Gong Qingyao was the first to walk on the red carpet, her time was very tight.
At 2:30, a red car appeared beside the red carpet, the door opened, and shoes made of white silk appeared in the eyes of everyone. Then the owner of the shoes appeared in everyone's eyes, and everyone present was full of surprises. The amber robe was lined with a layer of silk tulle on the outside, just like a fairy. 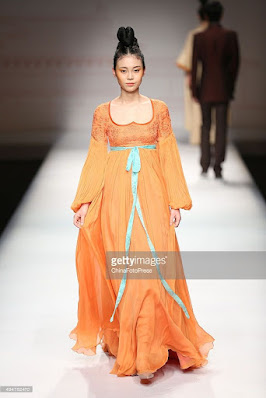 "Master!" Someone shouted excitedly, and the reporters on the scene woke up instantly. One by one picked up the camera in their hands and took pictures.
Compared with usual, Gong Qingyao had slowed down, but in the eyes of the reporters, she still walked too fast, so that after she walked on the red carpet, the reporters was still rushed and in a daze.
After walking through the red carpet, it was the interview corner. Since there were so many reporters, each reporter could only ask one question. If the rule was violated, they would be sent out.
"Hello, I am a reporter from the U.S. and I am interested in metaphysics. Do you think your country's metaphysics is worth studying for us foreigners?"
In fact, the reporter's original intention was to let Gong Qingyao talk about the advantages of metaphysics, but Gong Qingyao replied simply, "It's worth it."
Netizens laughed.
[The master's interview answer is always so funny every time.]
[Hahaha, It was so ridiculous that I was almost blushing when I saw that foreign reporter's face.]
[Each reporter only has one question, and he doesn't know how to ask.]
…

After answering seven more metaphysical questions, a reporter finally asked a topic related to the Film Festival, "Master, do you think you can win this time?"
"I don't know." Gong Qingyao said honestly.
The next reporter waiting for a question heard Gong Qingyao's answer and immediately asked, "Shouldn’t the Master able to figure it out?"
"Metaphysics doesn't work on oneself." Gong Qingyao said.
Everyone suddenly realized. Yes, they all said that fortune-telling didn’t work on the fortune-teller themselves.
Gong Qingyao continued, "But I saw my face glowing red, so something good will happen."
Reporters:??? You said you didn’t count yourself?
Some media who wanted to shock the people’s eyeballs directly took the title and said that the Master calculated that she would win the award. After the news was released, they went hot.
…
After the interview, Gong Qingyao entered the hall, and the Film Festival soon began.
The best actress award was placed last this year.
‘Yi Yao’ had won the best director award, and many off-site audiences were thinking that Yi Yao wouldn’t get more awards.
Gong Qingyao's performance in ‘Yi Yao’ was amazing, but the other four nominees were not weak, and the people of the country were a little nervous for a time.
Soon, at the end of the show, the host said, "I know that the last award has attracted much attention, and everyone is guessing who will win the title, then…" After a pause, the host said, "Do you remember the ending song of ‘Yi Yao’? Let's ask the original team of ‘Yi Yao’ to play a song for us."
Everyone was shocked. Although the ending song was good, everyone wanted to know who the winner for best actress was!
After waiting five long minutes, it was finally time to for the awarding.
"Well, I won't procrastinate this time. The one who won the best actress this year is…!"
Everyone held their breath and listened to the host, "Gong Qingyao! Let's warmly welcome her to the stage!"
The audience screamed, and the viewers who watched the live broadcast were instantly excited.
[I just jumped up. My mother thought I was crazy. I told her that Master Qingyao won the best actress award. My mother said she deserved it and said that she would add a drumstick to me at night!]
[Our dorm room went crazy, and I heard the next room also screaming.]
[F*ck, you don't believe me, we light up some fireworks!]
[Someone on my side is also setting off fireworks. It's just like the New Year!]
…

There was enthusiastic applause inside the venue and heated discussions outside the venue. Under such an atmosphere, Gong Qingyao walked onto the stage, her face was still expressionless as usual.
After the award-presenting guests finished giving the trophy to Gong Qingyao, the host said, "Congratulations, Master Qingyao."
"Thank you." Gong Qingyao said.
"Is there anything you want to tell everyone?" The host asked.
"Yes." Gong Qingyao said, "I am very happy to receive this award. Thank you my fans for supporting me all the way, thank you for the company, thank you for my agent and assistant."
The people named by Gong Qingyao burst into tears. Ai Xiaoyun wiped her tears and said, "When has the Master become so conventional?"
Ah Yuan also said, "I feel that the Master wants to say something different."
"As the long-cherished wish is over, from today, I will quit the entertainment circle!" Gong Qingyao finished speaking, and there was a moment of silence on the scene.
The host was shocked by the sudden announcement. Although he had encountered many emergencies before, he had never met who said something like this after winning an award. The acceptance speech was to announce withdrawal from the entertainment industry!
Gong Qingyao bowed after speaking, and then walked off the stage.
The audience went noisy, "What's the situation?"
The reporters wanted to stop Gong Qingyao and ask why, but Gong Qingyao walked too fast and they couldn’t keep up. So the hot search first changed from #Gong Qingyao Best Actress# to #Gong Qingyao withdrew from entertainment circle#.
Gong Liangji, Song Qiubai, Qin Ze, Gong Muqing, and Shen Sinian were already waiting outside. Seeing Gong Qingyao coming out from the inside, everyone waved happily…
*****
Extra stories after this~