The Master of Metaphysics is The Movie Queen – Chapter 114

The world revolved, and the originally peaceful tomb trembled violently.
"It feels like an earthquake." Lu Qianqian said. Although she could not feel the trembling under her feet, she could still see the falling gravel.
Gong Qingyao looked forward. Lu Qianqian couldn't see it, but she could see clearly that the formation in the tomb was changing, and the formation in front of them seemed to be three ancient formations.
Lu Qianqian saw Gong Qingyao standing not far away, and the surrounding rocks changed from broken stones to big rocks, but they were all shot off the moment they were too close to Gong Qingyao, "Master, won't you hide?" She was a ghost, these couldn't hurt her, but Gong Qingyao was a human being, and it was inevitable that she would be hurt by the stones.
Gong Qingyao did not speak. She was staring straight ahead without blinking.
Lu Qianqian knew that Gong Qingyao had her reason in doing things, not to mention that Gong Qingyao's brows were frowned, and she seemed to have discovered something unusual, so she stood aside without saying a word. She didn't know how long it took, the earthquake calmed down, and the things in front of her seemed to have recovered their previous appearance. If it wasn't for the fallen stones still around, Lu Qianqian almost thought she was having an illusion just now.
Gong Qingyao's expression returned to normal, and she walked forward, but her eyes revealed a firm look. Seeing this, Lu Qianqian hurriedly followed.
Lu Qianqian originally thought that Gong Qingyao wanted to see further, but after entering the room, she saw a huge coffin. The coffin exuded a terrible aura. Lu Qianqian didn’t dare to approach, so she followed Gong Qingyao from a distance.

Gong Qingyao stood beside the coffin and saw the lid of the coffin slowly moved. Lu Qianqian watched all this with wide eyes. Although she was a ghost and was already accustomed to her identity, she was still scared when she saw this scene.
There was a corpse lying in the coffin. Before Lu Qianqian could see it clearly, she saw a burst of evil spirit attacking her. Lu Qianqian felt like she was pinned and couldn’t move.
Gong Qingyao took out the soul breaking knife to resist the evil spirit. Taking advantage of this gap, she quickly retracted Lu Qianqian back into the ring. She then chanted a curse to temporarily seal the ring, so that the evil spirit could not attack.
"Hahahaha." There was a sudden burst of laughter, which was a little arrogant, also seemed to carry some joy.
The place where the laughter came out quickly condensed into a person. Gong Qingyao glanced intently and it turned out to be just a ray of Divine Consciousness. (TN: 神识/Shén shí = Divine consciousness, which described as the mind and consciousness of all beings.)
Shen Shi saw Gong Qingyao looking at himself and said, "Yes, not bad, you can see that I am Divine Consciousness. Originally, when you entered this tomb, I just assumed that you had entered by mistake." Although he had been expecting someone to come in, he just didn’t expect it to be such a young woman.
Gong Qingyao said nothing.
Divine Consciousness shook his head and said, "I didn't think you can even go through the three levels in a row." From ancient times to the present, the little girl in front of him was the first person to reach this point.
Gong Qingyao still didn't speak. She just stared at the Divine Consciousness. This Divine Consciousness was probably based on the appearance of the master before his life, with white hair and gray robe. It also looked like a fairy tale.
Divine Consciousness also looked at Gong Qingyao. Gong Qingyao had a feeling of being seen through.
Divine Consciousness touched his beard and said, "You are young, but your metaphysical level is pretty good."
Gong Qingyao was very dissatisfied that she was being looked at just now, so she said, "I was guided by you to enter, and I have seen the formation. Is there anything else?"
After a while, Divine Consciousness laughed, "The younger generation is terrible now. Think of how many people in the past spent their gold just so I can say one more thing, you girl."
Divine Consciousness shook his head, "Never mind, I'll give you one thing at last." He took a wooden hairpin out of thin air, and Gong Qingyao couldn't discern what kind of material the wooden hairpin was made of.
"In the future, I wish you good luck." After the Divine Consciousness seemed to complete its task, it began to slowly disappear.
Gong Qingyao took the wooden hairpin, a ray of white light flew into Gong Qingyao's mind, and she was immediately stunned on the spot. After the wooden hairpin was in her hand, the tomb seemed to turn on the self-destructing mode, the coffin was actually submerged by the sand, and everything around it began to slowly sink into the ground.
After a while, Gong Qingyao came back to her sense. She collected the wooden hairpin, bowed solemnly to the coffin whose only lid was visible, and then mobilized the profound energy in her body to fly above the ground. 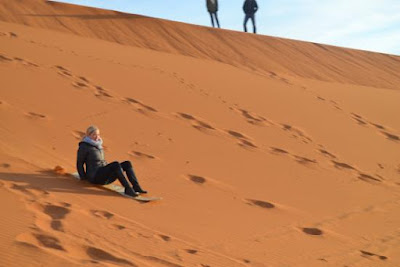 "But we don't have tools." Guo Yuankai said. All sand sledding needed tires or wooden boards.
"Then what to do?" You Xingyu was also very interested in sand sledding, but it was not easy to find the tool in this bare desert.
Lu Yongyi also shook his head. He didn't know what to do.
Gong Qingyao said, "Sit on clothes."
Everyone suddenly realized they could also do that.
Guo Yuankai took off his jacket immediately and said, "You can use mine." Although his jacket was specially bought for the reality show, and the price was not cheap, but at this moment, he directly took it out for everyone to play sand sledding.
You Xingyu and Lu Yongyi also took off their coats. In this case, there were three coats. It was enough for everyone if they took turns.
Everything was ready. There should be a place where they could play sand sledding. Everyone got up and looked for it. After a while, they really found a place with a higher slope. In the attitude of ladies first, everyone let the three ladies to play first.
Zhong Xinyi wanted to play, but she was a little scared when she stood on the top of the slope and looked down, so she said, "Otherwise, let's let Sister Yao go first."
Gong Qingyao picked up Lu Yongyi's clothes and placed them down. She then steadily sledded down to the bottom of the slope.

Yu Chuxue was also a little frightened, but seeing Gong Qingyao's relaxed look, she no longer felt scared. She picked up the boy’s jacket and rushed down. When she rushed, she realized that it looked easy, but it was not easy at all. Not to mention that the speed of the sliding process was getting faster and faster. The jacket under her feet seemed to slip from beneath her at any time. As soon she felt that it was about to slip, Yu Chuxue rolled down uncontrollably. Fortunately, Gong Qingyao noticed this scene. She ran up a few steps, grabbed Yu Chuxue who was rolling halfway, and then slide with Yu Chuxue for the rest of the slope.
Seeing this scene, Zhong Xinyi didn't dare to sled even more. Yu Chuxue fell so badly. Her naked eye could see that Chuxue’s black hair had turned yellow with sand, and there must be sand inside her clothes all over. "Or, you should sled first."
Seeing that no one was volunteering, Lu Yongyi walked up by himself. As a result, he slid until two-thirds of the slope and began to be like Yu Chuxue, continuously rolled to the bottom of the slope.
Gong Qingyao who had just sent Yu Chuxue back to the top of the slope: …
This people were really worrying.
Lu Yongyi got up and shouted at the people on the top, "Come on, everyone, it won't hurt as you fall on sand."
Yu Chuxue nodded again and again, "It really doesn't hurt, but you will be covered with sand."
Upon seeing this, Guo Yuankai also took the jacket and sledded down, but when he reached one-half of the position, he also began to roll.
Everyone trembled in silence when they saw Guo Yuankai rolling down the slope.

As a result, Guo Yuankai got up and said, "Yes, it really doesn't hurt, Xingyu, come down quickly."
You Xingyu had to pick up the jacket and rush down. The result was not as good as Guo Yuankai, after traveling a short distance, he also rolled down frantically.
You Xingyu got up, then walked to the top of the slope and shook his hair. The sand was flying everywhere, "Sister Yao, how did you do it so smoothly?" After that, he took a few minutes to clean up. Let alone his body, his mouth was also full of sand.
"Yes, can you teach us?" Guo Yuankai asked. Although falling didn't hurt, it was not very pleasant to be covered in sand.
Gong Qingyao was a little puzzled, "Does this still need to be taught?"
Everyone:… Why was it okay to hit people’s face?
The viewers laughed suddenly.
[Hahahaha, Sister Yao was dazed and seemed to think ‘why do you still want me to teach this?’ The rest of the people look like they have been blown up."
[I saw Xingyu's irreverent expression.]
[lolololol Why are they so funny?]
[For Sister Yao, it is Level 1, but for others, it is Level 10, so everyone was not on the same level.]
[No way, I will laugh first.]
[This answer is really funny, but I really feel that what Sister Yao said is really from her heart."
…

Seeing that everyone seemed to be hit, Gong Qingyao pointed to the smaller slope in the distance, "Or, should we go there to play?"
Everyone took a look at the place where Gong Qingyao pointed, uh, compared with the current slope, it indeed seemed easier.
Lu Yongyi said, "Sister Yao, this is a good idea." He picked up the jackets and walked over to the sand slope.
Everyone walked toward the other slope. The slope was much smaller and the distance was very short. Gong Qingyao tried it and felt there should be no problem for everyone to play.
Gong Qingyao waved to the people on the top, meaning they could come down.
Lu Yongyi was the first to sled and fell when he was almost at the end.
Gong Qingyao: … Probably a mistake?
Guo Yuankai, the second one, fell two-thirds of the way.
Gong Qingyao: … Maybe it's also a mistake?
Guo Yuankai got up and said, "It's really much easier. I'm not afraid at all. Come down, everyone."
You Xingyu barely made it through half of the way before he began to roll.
Gong Qingyao: … Was it so difficult?
Upon seeing this, Yu Chuxue ran directly half way down the slope before she began to sled. Even so, Yu Chuxue still fell several times.
Encouraged by Yu Chuxue, Zhong Xinyi finally started, but she also fell several times.
After Lu Yongyi fell a few times, he finally mastered the technique. After slipping his face several times, he sledded smoothly to the bottom.
Guo Yuankai hurried over to learn.