Grete uttered cruel words, wishing to take off the chef's hat on Zhen Nuli, so that he was defeated and regretted provoking his dignity of a chef. However, when he was about to walk into the back kitchen, he saw the entire lobby full of contempt.
"Shameless, this is deliberately bulling the small!"
"Of course, he knew that the boss had gone to give birth. Isn't this just looking to pinch a soft persimmon?"
"It literally is!"
"I am convinced! His skin is as thick as the wall."
Grete was so angry that his hands trembled when he was about to take his cooking table out. He was indeed bullying the small, but who was to blame? Didn't the other party provoke him first? He was about to leave, but that stinky boy had to stop him. However, in the eyes of the crowd, no matter how beautiful he won later, he would be stamped as shameless, because he was bulling the younger generation.
Grete deeply felt that even after thousands of years of evolution, people were still so mean and the trick was deep. He was standing on the head of a junior chef! If he didn’t fight, then he would be judged to be afraid of a junior chef. But he also couldn't win peacefully as he would be judged as bully. Meanwhile, if the other party lost, there was nothing. What did he want a month's worth of coffee plus a low-level Chinese food helper for? It's simply a dilemma, no matter how he did it, it was a bad idea!

When Grete thought about it this way, he felt that he had lost a lot before the game even began. He quickly thought of a trick and snorted coldly at the ignorant stinky boy. "So that people don’t say that I embarrass you as a little helper, I will let three tricks in this competition for your advantage! One, I won’t use high-end ingredients. The prices of all competition materials are controlled within two thousand credits. Second, I won't use advanced recipes, I will use introductory recipes to teach you a lesson. Three, in addition to the Chef Association certification judges, you can select five diners from this store to cast one vote. I will give you some emotional points for the old customers. How about it?"
Grete put his arms around his chest. "If I lose to you, not only will I work for you for a month, but I can also give you three high-end Western recipes." He raised his head proudly, and looked at Zhen Nuli, who was wearing a weird chef's uniform in front of him, with contempt.
"Okay, I respect the old and love the young, whatever you say will do." Zhen Nuli nodded with respect.
Grete finally knew how his little junior sister could lose. The people in this store were really annoying! Furthermore, if his mentality was going to be out of balance, mood swings alone could affect the process of cooking. "Then let's start."
Grete stopped talking, went straight into the back kitchen, took out his cooking table with precision cooking equipment, and began to operate calmly, but with extremely fast hand speed. Whether it was his apprenticeship in his early years or when his teacher asked him to teach his junior brothers and sisters, he had operated basic Western recipes countless times. Even with his eyes closed, he could accurately season the foods. He was different from Zhang Xiaomo. He was very experienced and had a fast hand speed. He was not afraid of someone observing his cooking process and learning it secretly. He was very open and honest.

On the side, Zhen Nuli swept away his melancholy eyes, and his whole person was like a big-headed soldier that was charged and excited. Obviously, his movements were not so smooth, but in just one month, he had watched the instructional videos countless times, so he had learned some of Liu Weiwei's unique cooking style that was like flowing water. His movement were very beautiful and smooth.
"Hey, Boss Zhen doesn't only sell coffee, but he also cooks pretty well, he doesn't lose to the senior chef…"
"Very photogenic! Not bad!"
"Take it and show it to the boss later."
The diners outside Happy Restaurant applauded.
However, An Hao, who was the closest to Zhen Nuli behind the glass, was murmuring constantly behind his mask. "Return to the basics of design, use space to create balance, simplify the design into basic shapes, and then rearrange the elements. That's right, that's it… Finally, use size to establish a visual hierarchy. Here we have to cut into pieces like this!"
An Hao’s face went dark. These shattered design concepts to be integrated with cooking, could only be done by his master and crazy junior brother. It was true that so-called genius and lunatic were separated by a thin line.
An Hao sighed and watched silently beside Zhen Nuli. He wanted to send a message to his Master, but he didn't know about her physical condition, so he put it down for a while.
…
An hour later, Grete announced that he had completed 50-person set meal when Zhen Nuli was still working on his second course. He also has a master style, "I won't bully you as a junior. I can wait for you to finish, and then take the assessment together. You can decide the order of the judges to taste also."
Zhen Nuli was still working hard to deal with the chicken in his hand. He was so busy that he had no time to wave his hands. "No, you can go first."
Grete’s temple twitched, and he finally couldn't bear it. "Okay, then I will ask the judges to try my dishes first."
There were a total of eleven judges. After a series of enthusiastic PKs by the old diners of Happy Restaurant, they finally decided on five judges.
"All of you present here have a copy, as I am sorry for disturbing everyone's interest in dining." With that, Grete asked the robot to take out 50 soups like flowing water.

Grete's soup, main course, and dessert were not made without thoughts. He obviously had more experience than his own irrational younger sister. Western food especially paid attention to the order of meals. Even each plate needed to be temperature-processed, which complemented the temperature of the food presented. This way, each diner’s could taste the most suitably heated ingredients. Therefore, he was not in a hurry at all, the first thing he presented was the hot soup.
Boss Liu, a regular of Happy Restaurant, was the first person to taste today. He went online with Zhu Ya for lunch, and with good luck, he won the PK and became a representative of the diners. The robot moved all the way in front of him, put down a soup bowl, and then lifted the lid of the bowl. Up to this moment, the temperature had been kept at the most perfect level, which was not hot enough to the mouth, but just enough to warm the body.
Boss Liu tasted the first bite, and his eyes lit up. He was different from most of the diners of Happy Restaurant. He often ate real five-star cuisine, both Chinese and Western food, and it could be said that he had truly experienced the level of high-level chefs. As a veteran, he could fully appreciate the chef's attentiveness and care behind the soup temperature after one bite.
If Zhang Xiaomo's corn soup was three and a half stars, then this Grete's Borscht Soup was obviously five-star. The color of the soup was rosy and bright. The white onion, cabbage, and beef were all cut into small dices that were easy to chew. Almost all of them melted in the thick soup. He could feel the thickness of the soup from below clearly when he reached with a small spoon. 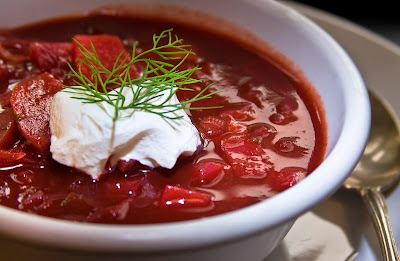 When the soup entered the mouth, the soup was smoother and sweeter. It had the unique fresh and sour taste of tomato, the sweetness of onion hidden in it, and faint spiciness of black pepper, which was wrapped around the tip of the tongue… until finally, the entire mouth was covered. The thick soup occupied all the taste buds and all subtle sensory experiences. What’s even more amazing was that the diced vegetables in the soup melted in the mouth, but the diced beef was still chewy. With the contrast in texture from the beef, it made people enjoyed the different levels of the soup. Like mountains and rivers, ups and downs, highs and lows, it took diners to appreciate different beautiful scenery. This was an extremely high-level cuisine!
The price of a five-star dish was equal to the monthly salary of a normal office worker. Only in this way, the soup with endless aftertaste, sour, sweet, and spicy, was worth the high price.
"This is dangerous for Happy Restaurant." Boss Liu put down the soup spoon and couldn't help feeling down. "Senior chefs are extremely different. Even with the most basic recipes, the precise taste, color, and fragrance, every detail, even the presentation of the soup, was done to the extreme."
The Borscht Soup in front of other diners next to Boss Liu had already bottomed out. He also said with a complicated face, "Old Liu, you are right."
"It's really a bit of a hang. This borscht is the most perfect soup I've ever tasted. I don't know if I can ask for another bowl later?" Another Happy Restaurant diner also had the same thinking.
Zhen Nuli was still struggling for his second dish, but many diners and judges who had already eaten the Borscht Soup had already looked at him sympathetically. They hadn't tasted it yet, but obviously the taste of the Borscht Soup had successfully convinced their love of food.

If Liu Weiwei was on the scene, she would feel like she had met an enemy at the moment. Borscht was also a popular soup in her time. Although it came from Russia, it spread to the northeast, and later became popular in Shanghai and other Jiangnan regions. It could be eaten not only in western restaurants, but also in school cafeterias, company cafeterias, Northeastern Chinese restaurants, and even in ordinary people’s home cooking. The sweet and sour taste was so rich that even if it was eaten with only a slice of bread, it made people feel utterly overwhelmed. This dish had almost a home-cooking dish in the Shanghai region cafeterias to where it had been incorporated into many people's memories or even in their bones. It had captured the hearts of many people, and it had almost become a representative soup in new Northeast cuisine. Borscht was a soup that met the tastes of the general public and was suitable for both men and women of all ages.
As a dish in the competition, it could be said that half of the win was already won at the starting line.
Zhen Nuli also had some sweat on his face. Hearing the sound of discussion outside, his hands also slowed down for a while. His narrow eyes looked at the red soup outside, and his eyes were a little lost.
Grete quickly noticed Zhen Nuli situation and couldn't help but smile, "If you apologize to me, we can terminate this game now. Before fully grown up, you were suddenly placed at a height of 10,000 meters. Seeing the aurora-like scenery, it will be easy to fall to pieces. Young man, I'm here to have a competition with your teacher, so I don't want to sever the confidence that will destroy you for a lifetime! Just surrender!"