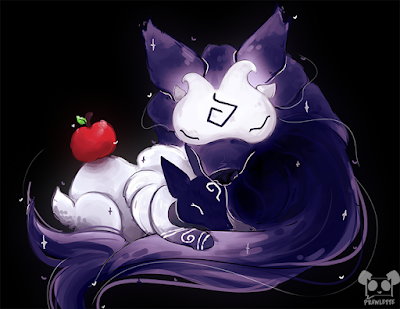 Eat while laughing in a hot spring…
The Big Bad Wolf was very satisfied, everything was perfect. It was worth it to work overtime this past week just to squeeze out this a small half-day holiday.
The Little Lamb Liu Weiwei’s mental power was gradually growing under the help of the awakening stone. As the cooking soldier of the Big Bad Wolf Qin Mo, their level of mental power synchronization had reached nearly 80% after more than half a year. Even without any auxiliary equipment, they could feel each other's… pleasure.
…
Of course the Little Lamb was delicious.
After eating, the Big Bad Wolf wiped his mouth clean. He still felt the aftertaste, and it summed his good meal. He ate starting with the lamb leg, and then he ate the two front hooves little by little. In the end, only the soft and tender body of the most beautiful and gentle lamb was left, and it was cleaned in one breath!
Perfect!
"Next time, let's go to the iceberg. There is snow outside, hot water inside. Ice and fire combined, and then turn over to eat…" The Big Bad Wolf wanted to turn the head of his flower, but the Little Lamb slammed his back with her hoof and pouted. In the end, the Big Bad Wolf had to wash the tired Little Lamb and carry her home. He also had to massage her four little hooves and waist.
But fortunately, the Big Bad Wolf was not fined to sleep in the study that night. Maybe because of the superb massage technique, the Little Lamb fell asleep directly on the pillow as she was too tired. The Big Bad Wolf let out a sigh of relief, hugged her small waist, feeling satisfied, and fell asleep comfortably.
The next morning, the Big Bad Wolf got up early and prepared a catastrophic breakfast – muggy oatmeal. He smiled and tried to feed his Little Lamb.
As a result, at breakfast, even the little white rabbit that often ate grass escaped.
Meanwhile, the mini Krypton Beast waiting in the kitchen early in the morning rolled its eyes and swept down its whip-like tail. It smashed the Big Bad Wolf’s Collector's Edition Mecha Model as a protest…
Big Bad Wolf: !!!