Handling tofu required extreme care. If people didn’t pay attention, they might crush the tofu and spoil the shape. Liu Weiwei had mastered chrysanthemum tofu. But, if it weren't for her to have the system’s training room with different time flow rates and two skill books, it would take at least ten years of practice to make it so fast and smooth.
An Hao cut 20 or 30 catties of potato shreds every day, but shredding tofu was still not possible for him. He could mainly cut a soft tofu with the same thickness.
Zhen Nuli had only followed Liu Weiwei for less than a month, and even if he had studied with others for a few years, he was not yet able to cut soft tofu into the same size. However, he was engaged in design. Interior designer often needed to make miniature furniture as model by himself, and making a small model of a house was a normal thing. Since the last time he saw chrysanthemum tofu, he had worked for two weeks to create a set of metal abrasive tools dedicated to cutting tofu. Cutting with knife, he obviously couldn't do it yet, but using molds could also perfectly make all kinds of cool shapes on the tofu!
"This is… Mahjong?"
"One barrel! Damn, this is sixty thousand…!?"
"Sh*t, am I about to eat or play?!"
The atmosphere of the entire Happy Restaurant suddenly changed. The elegant atmosphere for the high-end Western cuisine presented by Grete before was instantly swept away by jianghu grassroots faction.
"Mahjong!?" Grete was dumbfounded. Mahjong, even in Interstellar era, couldn’t be erased from the history of Eastern nations. As the Eastern and Western cultures on Interstellar Alliance gradually learned from each other, Mahjong was also slowly being introduced to the people in the Western District. No matter what era, people couldn’t resist the temptation of entertainment.

"Hahaha, this tofu soup is so funny!"
"Tsk, I want to have a big battle."
"Then let's eat together, mine is ten thousand, do you have twenty thousand? Hurry up and eat twenty thousand!"
Grete's expression suddenly changed when he heard these lively sounds. "Food is not a toy." He looked at Zhen Nuli with disagreement. But soon he saw the judges outside had surprised and admiring expressions on their faces.
"Wonderful idea, to integrate mahjong into the soup. This clear milky white and jadeite color is really the same as mahjong pieces. This soup is interesting." The gourmet judge was the first to express great interest.
"Master Ragel, do you also play mahjong?" Another male judge looked strange, "Let's have a bite first."
The gourmet judge laughed, "I naturally want to taste it." He swallowed and then slowly scooped the tofu with a spoon, together with the shepherd's purse greens, he examined them closely under the light. After some observations, he put them in his mouth and chewed.
"Shepherd's purse is fragrant, and its umami flavor in the mouth does not disperse. It rolls with the smooth tofu. The taste is soft but uniquely tough. The soup is condensed but not thick, and the thickness is appropriate, not too thick or too thin, just right in the mouth." The gourmet judge nodded. "It's a pity… if it's not too delicious, I would like to scoop out the tofu cubes, line them up and play a round of mahjong. The handwriting and color on this tofu are so clear, like a treasure carved on top of jade. I am afraid that even the average senior chefs don’t possess this skill in their hands."
Grete's face changed. He just noticed that the tofu pieces in this soup were uniform in size, without a trace of deviation visible to the naked eye, and he could even see some pattern through the glass.
"How did you… do it?" Grete couldn't believe it. "How old are you?! Even if you practice knife skills from birth, you wouldn’t have this kind of knife skills yet! Did you let the robots help?"
Designer Zhen chuckled, "The secrets of martial art should not be passed on easily."
The corner of An Hao's mouth twitched.
Grete shook his hand, so angry that he didn't want to speak at all.
…

While everyone was happy to eat and play, they didn't forget to take a photo with the mahjong tofu soup and upload it to their social circle. After a busy first course, the second dish was served.
People thought it was a normal dish, but they didn't expect to see a big lump come up!
"The shape of this dish…" The food commentator judge was taken aback, "Was it because the first dish took too much time, so there was no time to make the second dish? The appearance is zero points."
"Rice ball!"
After the ball came up, others didn't know it, but the regular diners of Happy Restaurant were all staring, feeling strangely familiar. However, the ball was a little different from the usual rice ball. Besides its similarity in shape and size, it was covered with a huge green leaf.
"Hahaha, rice ball, Nuli. You think if you put a dress on the rice ball, change the color, I won't recognize it anymore?!"
"Laughing! Nuli, you are too funny! Let alone mahjong, what is the situation of this rice ball wearing a vest? You want to make me laugh!"
Everyone laughed. However, when they were about to bite into the rice balls, they were startled by the smell they felt on the tip of their noses.
"It smells like meat? Nuli, what's in your rice ball?"
"Huh? Chicken flavor?!"
Everyone was a little surprised, but soon they were shocked by the bite in their mouths.
"This is a lotus leaf?" The gourmet judge started to open the second dish personally, and he smelled a lotus scent, "Is this…" He quickly unfolded the layers of lotus leaves, revealing a steaming sauce-colored rice grains inside. 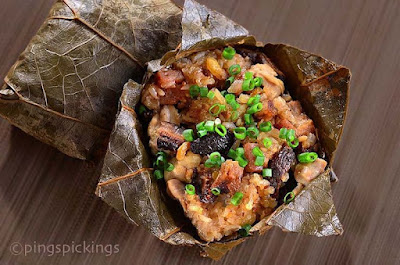 The grains were clear and translucent. The brown glutinous rice grains look slender and plump. There were no holes in them, and they were covered with soft golden chicken bites, and there were also black and golden mushrooms. As the glutinous rice unfolds, layers of chicken, mushrooms, and rice were all sectioned differently. The fat from the chicken had been completely integrated into the glutinous rice, making each rice grains radiated the light just like gems.
The mouthful of glutinous rice that was not completely swallowed because of the surprise had a full and tough taste. The savory flavor of chicken bred on the tip of the tongue, and it also revealed a refreshing and pleasant fragrance in the summer heat.
It was the smell of lotus leaves!
"The lotus leaf wrapped outside, when the glutinous rice chicken is stewed, the fragrance has completely penetrated into the glutinous rice, locking all the smells inside." The rice in the hands of the gourmet judge Ragel had been broken into halves. He chewed carefully, and deliberately picked out a piece of chicken on his hand and stuffed it directly into his mouth. "The chicken that is easy to dry out, because it is wrapped in a layer of glutinous rice, a layer of lotus leaves and a layer of fat, has kept its moisture. The chicken still retains its tenderness, and the chewiness is just right."
"All the sauces and seasonings are also successfully blended. This chicken should have been marinated first, right?" Ragel had sharp eyes and tastes. When he finished speaking, the food commentator next to him exclaimed.

"Is there also salted egg yolk in it?" The food commentator finally put away the contempt that had been on her face since she entered the store, "Salted egg yolk counter act the greasy taste. When eating too much glutinous rice, people will inevitably feel sticky in the mouth, also the fat from the chicken does not help at all, but the salted egg yolk can instantly make the whole glutinous rice chicken taste lighter."
Designer Zhen in the back kitchen was inevitably a little nervous. He tightly grasped the knife in his hand, his ears pricked up high. He waited faintly to hear the praise outside before he was relieved. "Master is right. The salted egg yolk tastes really good for both men and women. It is a must to add to any kind of dumplings. Fortunately, I reviewed Master's quotations again last night, and it is really helpful!"
An Hao could not help but nodded after hearing this, "Yes, I watch the video left by Master once a day, and I feel that my cooking has been improving. I can see new learning topic from the same video every day. Master’s craftsmanship is simply… unfathomable."
"That's for sure," Zhen Nuli copied Liu Weiwei's words a hundred times a day, "Every dish she cooks has golden ratio and perfect step each time. As long as we learn every day, we won't lose to these cats and dogs!"
"F*ck" Grete was so angry that he was about to smoke. Even if the other party begged to go to his shop to work for a month, he would never accept him. This was so upsetting!

Obviously the game was not over yet, even if there was a wave of applause, but Zhen Nuli was not going to win. Great knew that his lava cake was invincible. It’s difficult for Chinese desserts to surpass Western desserts. This was a natural gap, just like knife skills. However, the well-informed him would never have thought that Zhen Nuli did not challenge his dessert at all, but instead took a dish!
"Candied sweet potatoes!"
The five Chef Association judges all stared, and even Grete could hardly believe his own eyes.
"Traditional famous dishes as desserts?!"
"… But this seems to be fine?"
"The sweet potatoes themselves are sweet, and topped with syrup it can definitely be called dessert."
The regular diners quickly picked up their chopsticks and the five Chef Association judges also began to taste.
It was pure gold, like pieces of gold falling on a rich dinner plate. And when the chopsticks stretched over to clamp the sweet potatoes, an amazing scene happened. The sugar thread, which looked like a princess’s golden hair, continued to pull longer and thinner with the movements of the chopsticks... 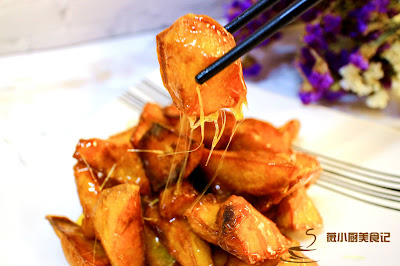 "Please dip them in white water before eating." A robot gave a prompt.
Many people had never eaten the dish before so they couldn't help but froze, but after doing so, they knew the secret. It turned out that this long and slender sugar shreds broke when they came in contact with water. When the water dipped candied sweet potatoes was put into the mouth, the first tastes was the cold white water and then the sweetness.
This dish was bland first, then sweet, cold first and then hot… It was also a novel experience of both ice and fire. And its presentation and the way it was eaten was interesting in the eyes of diners who had it for the first time.
"It's really the same as the name, can you draw the wire endlessly?" (TN: Candied Sweet Potatoes/拔丝地瓜/Básī dìguā, Básī could also means wire drawing.)
"Hey, my sugar thread is longer and thinner than yours."
"Don't be proud, my next one will definitely be longer than you!"
The meal was delicious and fun, and even the judges almost emptied their plates.
The serious atmosphere of the game once again went crooked, the tension dropped to the bottom, and the fun easily prevailed.