Zhen Nuli’s lips moved, making a sound of broken thoughts.
"What are you talking about, do you want to pause?" Grete stretched his ears and moved closer. "You need to speak louder, I can't hear you."
"Borscht Soup… color number FF6633, Warm Red, color that is easy to arouse appetite, excites people, and speeds up the heartbeat. Tsk, it is a color that excites me, but it can be redder and redder~"
Grete was dumbfounded, what a mess! Was this low-level chef who provoked him, had brain sickness? The words that Zhen Nuli murmured, he understood each of them, but not when they were stringed together. However, what did they have to do with cooking? Cooking Borscht Soup, he couldn't make a mistake even if he closed his eyes. Its color now was the most perfect and met the standard five-star level.
Great sighed silently, and once again regretted his decision to come to this shop today. Comparing cooking with a novice chef was too degrading for him. His opponent had a problem with his brain, so let’s just made this something to be laughed at in the future.
But Grete was experienced and mature. Although he regretted agreeing to the competition, since he had already started, he would do his best to finish it. His second dish was delivered to the table by robots one after another after some guests finished with the soup.
When an iron plate with a diameter of an adult arm was put on the table, almost all the guests of Happy Restaurant exclaimed. Only the six judges from the Chef Association who came with Grete looked as usual.

"Master Grete, even if you are competing with junior, you are very serious," A blonde female chef, also a food commentator, sniffed the air. "Often the most basic dishes brought the true skills of a senior chef."
A senior chef next to the blonde chef agreed immediately, "The creative recipes of the Masters, and even their peak signature recipes, are almost always refined and evolved from basic dishes."
"Yes, even for me, in the past three years I have almost never had a soup that moves me more than the Borscht Soup just now. It really deserves to be made by Grete who owns a top restaurant." The only gourmet on the judges patted his stomach with a face of enjoyment.
And when the robot in front of the judges lifted the metal lid, golden, plump, and steaming chicken was revealed. It was dripping hot oil. Its golden wings spread slightly, and two curvy chicken legs appeared. The judges’ discussion suddenly stopped.
The lines of the chickens were smooth and beautiful. The skin of the whole chicken body was shiny, and there was no trace of damage, broken skin, or burnt. The chicken was also laid on green lettuce leaves as a beautiful decoration. Red carrot cuttings, and pale celery that looked like jade scattered around the silver plate. 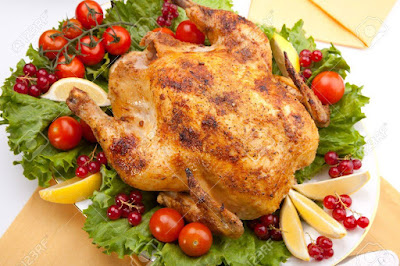 "Roast chicken!"
"A whole one, sh*t!"
"It smells good…"
"This aroma not lost to the boss's crayfish at all!"
"Is the taste of chicken this so good?!"
Grete heard the exclamation of the diners outside, and a smile from the corner of his mouth rose. Western food didn’t have elaborate knife skills like Chinese food, but he thought it was not bad in terms of seasoning. Nutmeg, thyme, basil leaves, mint, bay leaves, cloves, dill, rosemary… How could it be not fragrant?! Even the cheapest broiler chicken, after being marinated with his exclusive spice formula, would become extremely delicious and attractive, making people unable to resist the smell!
Great was very confident. But Zhen Nuli's voice quickly floated to his ears.
"The chicken's presentation is very inelegant. If it can stand up and become a fighting chicken, it would be better. It will allow the human to see the vitality of the chicken. Even if it has become a dish, it will be more perfect if it continues to exude a majestic aura. Tut, it's a pity, this shape is not vivid and unobtrusive, without vitality, less than eighty points."
Great shook his hands. Roast chicken… stood up?!
"Nonsense!" Grete collapsed, but Zhen Nuli started to focus on his own cooking, completely ignoring him.

Grete almost smashed his knife, meanwhile the diners eating outside the glass had reached a climax.
The diners couldn't wait for the robot to bring the knives and forks, so they tore a wing or a chicken leg with their hands, and started chewing. The diners of Happy Restaurant were naturally more extensive than those of ordinary restaurants’ customers. Even crayfish could be peeled by hand, let alone a chicken?
Some were quite conscious. They took out crayfish-eating gloves that were placed on the table. After tearing the chicken, they chewed with their hands filled with oil in peace. Soon they were amazed.
"The skin is crispy, the meat is tender, and the unknown spice on it is slightly spicy. After chewing it carefully, it feels as delicious as chicken soup, even the oldest, difficult-to-tasty chicken breast was grilled just right."
"Yes, this chicken is not inferior to the boss's roasted chicken thighs. The meat is tender but full of elasticity. The key is that every bit of meat has a taste, and the more you eat, the more fragrant it is."
"Where is this senior chef's restaurant? I want to patronize and try his other dishes."
The diners had a lot of good reviews. They didn't say anything bad. Even the oldest group of diners at Happy Restaurant was conquered by the bold but delicate taste of this roasted chicken.
After the robot helped to cut the whole roasted chicken, it even showed the diners the perfect chicken that was white and without a trace of impurities like a gem…
"It's dangerous, it's really dangerous!" Boss Liu kept shaking his head and sighed.
And the third dish, the dessert came out soon. A dessert that could be called a must-kill lava chocolate cake! This was a classic dessert in French cuisine. It was the original masterpiece of a Michelin chef in ancient times, and it was also a nightmare for many novice patisseries. It was very easy to fail in production.
When the dessert dish was served on the table, the rich aroma of chocolate went to everyone's nose. 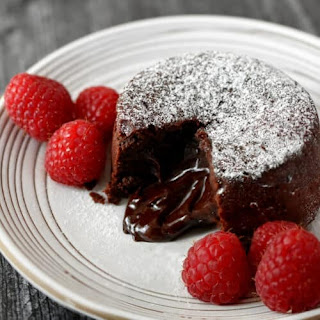 The small flaming berries scattered on the plate became a dazzling embellishment of the brown cake. It was also decorated with snow-white powdered sugar. This richly beautiful presentation was breathtaking. And inside this chocolate-colored soft cake, there was a stream of chocolate lava that was ready to erupt at any time!
The special small dessert spoon was delivered, and when the guests who had never tasted the cake gently cut the cake in a daze, they were attacked by the thick chocolate syrup that rolled down from the middle and berthed out instantly. The thick brown chocolate sauce was like molten lava bursting out, eagerly flowing, piping hot, and dangerous, but it made people feel irresistible and couldn't help but admire it!
There was a breathtaking gasp in the shop. The chocolate sauce flowing out of the cake almost quickly filled a small half of the plate. The cake on the fork was slightly bitter like pure dark chocolate, but after a swipe of the thick and fragrant chocolate sauce, it became extremely sweet. When the small red berries next to the cake were rolled in this chocolate sauce, the slightly sour juice also made the sweet taste on the mouth became clearer. It was refreshing and rich!

"This dish is the ultimate, it is full of life." The gourmet judge put down his dessert spoon, "It will move, jump, make a sound, and leave an indelible mark on the tip of the tongue and on the stomach… Grete has succeeded. If the soup and staple are opening remarks and self-introduction, then this dessert is an extremely successful curtain call."
"Indeed, using such ordinary ingredients to make high-end and exquisite meals is already a hundred points in my heart." The female food commentator next to the gourmet also nodded, almost all the lava cakes in front of her were eaten, "A sweet cake that is not greasy. Even if you give me two more plates, I can eat them all. I like them very much."
"The soup focuses on the sour, the roast chicken focuses on the salty, and the bitter but sweet cake as the end is an extremely outstanding masterpiece!" A bearded male judge also put down his fork and held up his water glass. "As a set meal, the taste is rich and complete."
Professional food critics drank water to rinse mouth after each dish to remove the aftertaste in their mouth before tasting the next dish. These six people who came with Grete could be said to be quite professional.
The people at Happy Restaurant originally thought they were definitely going to protect the chef because he brought them, but after eating Grete's three dishes, they also thought that the high evaluations were very objective.
The plates in front of many people were empty. Even if it was whole roasted chickens, it didn’t prevent them from being wiped out in a short time.
"Okay, it's my turn!"
But soon, an equally powerful and confident announcement interrupted everyone's enjoyment of the dishes’ aftertaste.

Zhen Nuli finally finished his cooking. But even if they hadn't tasted his dishes at this moment, the people present felt that the result was set.
"Boy, the difference between a senior chef and a junior chef is not in the recipe at all." The bearded judge couldn't help laughing. "However, I still appreciate your courage to fight a master chef!"
The gourmet judge rubbed his hands, "Come on, I have read the online reviews about this restaurant, and I have always thought it is a hype. Today, I finally have a chance to taste it."
"That's right, even if the main chef is not here, her assistant chef needs to show cooking skills that meet the requirements, otherwise she is not qualified to open a restaurant." The female judge also looked at An Hao in the back with a serious expression.
An Hao couldn't help but wanted to get his knife, but Zhen Nuli had already flown out. Obviously, he knew how his improved chef uniform was the most elegant and handsome. "The first is soup, please enjoy."
The robots took advantage of the silence to serve food. Bowls with white soup were placed on everyone's tables. When the lid was lifted, the people who were not optimistic about Zhen Nuli took a breath. They looked down at the bowl, and the soup, which looked like pieces of azure gemstones and cream-colored jade, falling in a pool water. Their reflections were almost indistinguishable from the real life scene, everyone was shocked. 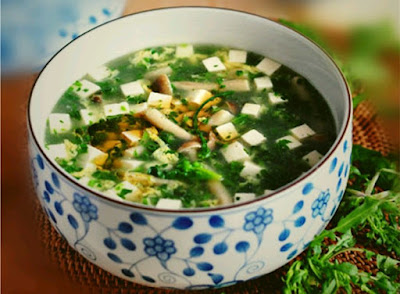 "This is an improved with invincible knife skill version of shepherd's purse tofu soup, also known as white jade soup." Zhen Nuli touched his chin, "Be careful, everyone."
The six judges of the Chef Association were all taken aback.
"Shepherd's Purse Tofu Soup, an ancient Shanghai dish?"
"No, this is different from ordinary tofu soup. The appearance of this soup…"
"The tofu is like gem, the cross section is glowing!"
An Hao was also drunk, "Is this the golden cut tofu you said?"
"No, but do you want the cutting mold? I can give you one!" Designer Zhen couldn't help but said proudly.
"…"
-----
[Small Theater]
Zhen Nuli: Oh, you are not fighting with one person.
Grete spit out a mouthful of old blood and fell to the ground.