Li Sanpang's brain was immediately refreshed by the Chopped Pepper Fish taste. He was completely defensive and defeated every step of the way. The crystal-smooth fish head meat, slipped into his mouth without any obstruction. The strong spicy taste made him sweat quickly. Fish meat, chopsticks by chopsticks, was inhaled and its bones spit out frantically by him. Soon, there were only pleasant red peppers left on the plate, and some wide strips of noodles that had absorbed the savory and spicy flavor of the thick fish soup.
His instinct of eating was probably out of touch with the way his brain thinks. At this moment, Li Sanpang deeply understood the truth that the old man at the same table said, all unhappiness could be solved with food. If Qin Mo gave him 50 free portions, err no, 100 potions of this corpse-less death fish head, he, Li Sanpang would decide to forgive him!
Humph~ 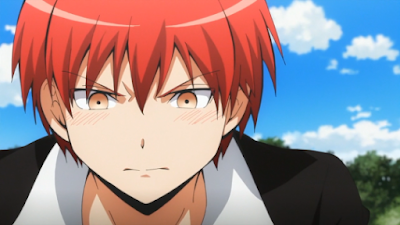 Li Sanpang thougth he was super generous. However, a soft but depressed sound from the table next door suddenly came into his ears.
"The one at the next table who just got broken in love, but after eating the chopped pepper fish, he cried and laughed. It looks delicious, then I'll order one too~"
Li Sanpang: !!!
He felt that he really fortunate today. He was heartbroken by his failed confession, but at any rate, although the beauty didn't belong to him, he was also to blame for his slow actions. Thinking about it, he would admit it. He was happy to heal after eating the delicious meal. The chopped pepper fish made him feel refreshed, and his boredom of more than half a year was wiped out.
But Li Sanpang didn't expect that he was also on the live broadcast of gourmet food!
As soon as Li Sanpang turned his head, he found the source of the sound. He saw that the little girl at the next table was beautifully dressed, her skin was moisturized, and her watery eyes were very energetic. The pink blush on her cheeks added even more cuteness. There was a mini pink camera on her table at the moment, and she smiled at the camera as she spoke.
As a long-time veteran in food forums, Li Sanpang knew that she was definitely a food anchor. Live broadcasting was very popular, especially since most people couldn’t afford to eat real food in real restaurants. The experience of watching food anchor eating during live broadcast had helped many people perfect their imagination.
But in recent years, food anchors had been suppressed. High-star restaurants were places where people from the upper class gather. So many restaurants didn’t allow anchors to shoot on the spot, so as not to affect the dining experience of regular diners. So recently, many anchors were ordering takeaways to their homes for their live broadcasts.

Li Sanpang used to like to watch these things, but he didn't like being the one recorded, let alone his love scandal. He was about to move when the robot gave him a bowl of white rice. He glanced at the steamy rice in front of him and the noodles that hadn't been eaten yet, and decided to go to the anchor to settle the account after eating. In just a few mouthfuls, he took all the rice into his mouth. Although he was not in the army, he was raised in a military district compound, so could be considered half a soldier and he paid attention to speed.
The soft and comfortable voice of the female anchor next to Li Sanpang floated to his ears again. His physical fitness was not bad, and his hearing was better than the average person.
"Wow, it's served. It's a big fish head~ Let me try it first, please don't worry~"
The soft way of speaking was not annoying. Accompanying the meal, it was quite appetizing.
Li Sanpang couldn't help but tilt his head to look over. The girl really ordered a plate of chopped pepper fish like him, which proved that Qin Mo did not feed him separately. The appearance of the dishes was the same as what he received.
"There are a lot of peppers. I don't usually eat spicy food, but I like them very much, you know." The girl quickly picked up a piece of white fish beside the fish’s gill bones. "Wow, what a beautiful color, can you see it? The fish meat shook on my chopsticks. When I picked it up, it was not broken into pieces at all…" She shook her chopsticks, "Shake Shake Shake, very light and elastic chewy feeling~~ I suddenly have an appetite~~"
Li Sanpang subconsciously picked up the chopsticks he had thrown down, and stuffed the tip of his chopsticks into the empty plate of fish head in front of him, dipping it into the sauce. He listened… and suddenly had more appetite.
Hmm… This anchor girl was poisonous!
Sure enough, Li Sanpang was experienced. This idea only came out for two or three seconds before it was verified.
"Ooh~ hmm~~"
The soft girl's voice was so delicious that it seemed to be groaning and moaning, which made people coulsn't help but think about the food she ate…
"Ah~ it melts in my mouth~~~"
Li Sanpang pursed his mouth, his body trembled.
"The soft and waxy fish sticks to the fish bones that have been fully flavored. With a light sip, it rolls softly and smoothly into my mouth. My whole mouth feels like I am eating popping candy~ the fish is soft, tolerantly knead all the spicy and delicious flavors together, but I still feel the strong taste of chopped peppers. Their wild and wanton tastes beat of the tip of my tongue, making the fish meat in my mouth feels like liquid that will melt together~"
"This melting can be clearly felt because the aroma, spiciness, as well as the freshness of the fish all erupted instantly, resulting in a large amount of saliva secreted, and then the fish was submerged altogether~"
"Like a sea fish that was surrounded by salty water, surfing on the peak of the waves stacked by peppers, it is exciting and refreshing!"
"Really, um~~~ It's so delicious~~ It's like being hit three times on the same spot!"
Li Sanpang: …

With this interpretation plus the eating sound, Li Sanpang wanted to teach the other party's something, but good men wouldn't fight with women. This woman was poisonous, but he wouldn’t fight!
"Robot, I want ‘to die’ again… eh, err… what is it called? Fish head!" Li Sanpang wiped the sweat from his forehead.
"I'm sorry, this store has a limited supply, and each person can only eat one serving each day." The robot quickly gave a cruel reply.
Li Sanpang was dumbfounded.
"Little brother, are you here the first time? You can only eat one portion, don't eat so fast next time, cherish every bite." The big brother at the same table gave Li Sanpang instructions again.
Li Sanpang suddenly became ill. He immediately stood up and looked behind the glass wall. Before long, a tall and oppressive body blocked his vision.
"Leave if you are done eating. There are still many people in line." Qin Mo was very direct.
Li Sanpang's heart was getting annoyed now. He looked around and lowered his voice, "Do you know that I was hurt? It was all caused by you, so I must be solemnly compensated."
"Go out and turn right, you can leave directly, I will not send you out."
"… Qin, Mo!"
"Military cafeteria provided daily meals, and the Teacher also has personal portions."
"F*ck, you just want me to go home… what? The cafeteria?"
Qin Mo patted the fat man on the shoulder and straightened his crooked neckline for him, "The military area didn’t raise idlers. If you contribute, you can enjoy the cafeteria food for three meals a day. Go home and you will understand."
Li Sanpang swallowed, "Does the cafeteria also have this fish head?"
"Yesterday’s cafeteria menu, two heads per person, and you can still get refill for the noodles."
Li Sanpang almost jumped up. That the old man who ate his Mapo Tofu and robbed his people to the military area without telling him! He was so dizzy with anger.
"Then, can I order another fish head to go?" Li Sanpang gritted his teeth, "That didn't count just now!"
"No." Qin Mo frowned, "Rules are rules."
"Stop it! Don’t say anymore, it makes my head hurt. I'm going, I’m going!" Li Sanpang snorted. He left after he finished speaking, but after two steps, he turned back. Looking at Qin Mo who was still trying to hide the person behind the glass wall with his body, Li Sanpang couldn't help feeling a little scary.
Terrible love.
Originally, Li Sanpang thought that if the two people were together, he would have had fun eating and would be in a good mood always, but he didn't expect that marriage would make an otherwise normal man so stingy and unreasonable! The originally dignified heartthrob, iron-blooded hero was completely changed by jealousy.
Horrible and scary!
"Here you are. Even if it's late, this is a wedding gift I have." Li Sanpang threw the awakening stone angrily.
Qin Mo stretched out his hand and said, "Thanks."
"Huh! We have been brothers for many years, what kind of thanks still needed…"
"Your eldest nephew's full moon gift, give it to me also when you go back."
"?!"

Li Sanpang staggered out of the hotel in the end. Eldest nephew. Women gave birth after roughly 10 months of pregnancy, he was only gone for half a year, so when he met the chicken leg girl, there was already his eldest nephew in her belly?
Sh*t!
Li Sanpang took a deep breath and waited until he climbed into the cockpit before patting his chest. "Adult world, so scary."
"Rice, search for a Skynet food live broadcast, um, menu chopped pepper fish head, location happy restaurant, use that as keywords."
"Okay, Master."
Li Sanpang laid on his back in the cockpit. Soon, a familiar voice came out again.
"Huh~~ see see…"
"The noodles have absorbed all the sauce~~~"
"The texture of this noodle, after soaking in the sauce for so long, is not brittle. It still has amazing smoothness and delicious elasticity. When the wide noodles enter the mouth and after chewing hard, the fish meat flavor seemed to bounce out of the belly again~ The fresh fish flavor was perfectly locked in the noodles, and the delicious and spicy taste was continuously emitted in the mouth while chewing…"
"I can't stop! The sound of the sea, the waves, the beach, the scorching sun, I seem to have gone to vacation in the wide sea of Planet Laimi~~~"
Li Sanpang stiffened and hit his mouth with his hand.
Ouch!
Why did he eat so fast just now and why?! What the anchor said made his saliva overflow, He really wanted to eat it again!
"Rice, hurry up and buy me some vegetarian ducks! Even if it’s out of stock, I won’t accept it! You can spend twice the price, or triple the price, buy it for me!"
"Okay, Master."
…
Meanwhile in the store, Liu Weiwei finally had time to wipe her sweat after finishing more than a hundred chopped pepper fish dishes. "You know?" After she was done being busy, only then she had time to care about her own affairs. "He… likes me?"
Qin Mo took Liu Weiwei’s hands seriously, and carefully applied hand cream to her, "He has also said that he would marry my sister. That person is just a big carrot, don't care about him."
"…Oh."

Want to read ahead? Check out MDMTL Youtube Channel for early chapters.