The Master of Metaphysics is The Movie Queen – Chapter 90

After speaking, Lu Qianqian returned to Gong Qingyao's Weibo main page, and she screamed again, "Master! Your followers have exceeded 10 million now!" Jealousy made her completely unrecognizable. In less than a year, Gong Qingyao's followers exceeded 10 million! She was too angry. She had been in showbiz for so long and she had not been able to break through ten million.
There were more fans, so there were more comments. Lu Qianqian read the comments one by one, "Many netizens are asking if Master will open paid fortune telling." Although Gong Qingyao never responded, Lu Qianqian knew that she was listening.
Fortune-telling on Weibo, Gong Qingyao had no plans for the time being, also she would start filming soon. Gong Qingyao would probably not be able to stay a few days in the capital before she had to rush to the Film and Television City in S Province. She played the main role on the drama, so she didn’t know when she would have free time.
After several bus change, Gong Qingyao arrived at the airport in the city, and there were still 40 minutes before boarding time. Gong Qingyao picked up her mobile phone and went to Children Go Home website. During this month and a half, Gong Qingyao did not do any calculation for the whereabouts of the missing children. Taking advantage of this free time, Gong Qingyao began to make crazy calculations.
Gong Qingyao, who had broken through the ninth level of Qi training, was filled with a lot of profound energy. Even after counting one hundred, she didn't feel tired at all. Gong Qingyao only stopped calculating when she needed to turn off her phone before the plane took off.
…
When Children Go Home posted the latest news on their website, the parents was immediately excited. During this period, they heard that the master behind Children Go Home was in retreat, and they were anxious. Now that they have received information, they were very excited to look for their missing family.
…
When they arrived in the capital, Gong Qingyao directly stopped a car and returned to Light of Hope Community. Before entering the house, she found a middle-aged couples standing not far away. From their faces, Gong Qingyao could see that they were kind-hearted people, but Gong Qingyao was in rush to a bath and change her clothes, so she only glanced at them before returning home.
Every time a layer of Qi training was broken through, some impurities would be discharged from the body. In addition, it was summer. Gong Qingyao couldn't bear her body sticky feeling. After entering the bathroom, Gong Qingyao washed her whole body three times with shower gel. Only then she felt refreshed.
Although she would only stay for a few days in the capital, Gong Qingyao decided to buy some ingredients and planned to cook at home. When going out, Gong Qingyao saw the couple again. They had to be here for some reason, but they weren't bad guys, so Gong Qingyao didn't think much about it.
After the Light of Hope Community was built, the surrounding industries were once again brought on fire. More and more people came, and a supermarket also opened. So Gong Qingyao went directly out of the supermarket near the community, bought some ingredients, and went home. Later, Gong Qingyao put the purchased ingredients into her refrigerator, picked up what she needed for dinner, and started cooking.
After eating and tidying up the kitchen, Gong Qingyao began to cut the remaining rough stones to make magical artifacts. She followed the schedule of rest, eat, and cut stones until the day she needed to set off to the Film and Television City in S Province.
Early in the morning, Qiu Yuan came to Gong Qingyao's house. As soon as the door opened, Qiu Yuan stretched out her arms and said excitedly, "Sister Yao, I missed you."
Gong Qingyao stepped back one meter silently. Qiu Yuan didn't care, she put the breakfast she had brought on the table, "Sister Yao, come eat, I brought you hot dry noodles. This is from Yiyi’s Private Kitchen. It's delicious." It was super hard to buy, so she had lined up from dawn. Of course, Qiu Yuan didn't say the following sentence. 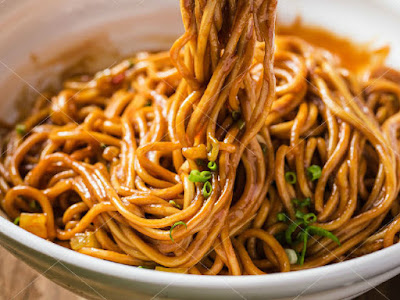 Gong Qingyao opened the outer packaging bag and smelled a scent of sesame seeds. After a bite, she found that it was delicious. "Where is yours?" Gong Qingyao found only one portion of noodles.
"I have eaten it." Qiu Yuan did not say that Yiyi’s Private Kitchen was limited to one purchase per person, so she quickly changed the subject, "Sister Yao, don't you miss me at all?"
Gong Qingyao finished her last bite of noodles, cleaned up the table, went upstairs and pushed her suitcase out. Qiu Yuan followed hurriedly after seeing this, "Hey, Sister Yao, wait for me."
A faint smile appeared at the corner of Gong Qingyao's mouth when Qiu Yuan couldn’t see.
After leaving the house, Gong Qingyao saw the couple again. Qiu Yuan on the side saw Gong Qingyao looking at them and whispered, "They were there when I came. I don’t know if they are a bad person." It was worst now. There were many elderly that corrupted others, or abducted college students. It was not that the elderly was a bad person, but the bad people were getting old.
Gong Qingyao immediately denied. From their face, she could tell at a glance, "Let's go."
The two were left, and the elderly couple watched them leave the community.
After arriving at the Film and Television City in S Province, Qu Yi and an assistant director were waiting outside the hotel. Gong Qingyao had agreed to play on his project, and she also playing without pay, so Qu Yi was very grateful.
"Qingyao is her." Qu Yi looked eager.


These personnel cooperated very tacitly, and soon they were ready, Gong Qingyao walked into the scene.
The staff shouted, "The 1st scene first take, action!"
After discussing with the Yi family members, it didn’t take long for Yi Yao to inherit the head. Today, the family couldn’t recruit any disciples to continue to study metaphysics. The world was also biased towards metaphysics. Yi Yao wanted to carry forward metaphysics, so she decided to go down the mountain, Yi Yao slowly walked to the gate of her hometown with these thoughts. She turned her head, glanced inside for the last time, and then walked down the mountain without looking back.
She must carry forward metaphysics and revitalize the Yi faction!
"Pass!" Qu Yi shouted. He thought that Gong Qingyao was an actress who was not good at expressing her emotions. Her facial expressions were almost exactly the same always. Today Qu Yi discovered that she could make the facial expression that he wanted.