The Master of Metaphysics is The Movie Queen – Chapter 83

The young lady showed a displeased expression, "I am Cui Yue'e, let me in."
The man beside her previously came over and took out his invitation, "We are together."
The staff said. "It turned out to be Master Cui, please come in." As for Cui Yue'e, there was still no staff coming to take care of her.
Gong Qingyao handed her invitation to the staff. After the staff verified it, Gong Qingyao walked into the lobby.
Cui Yue'e, who walked a few steps into the lobby also saw Gong Qingyao come in. Cui Yue'e turned around and went to see the invitation that Gong Qingyao brought. She saw that it was written as a special elder, with a look of disdain she asked, "Uncle Cui, see this. Did this meeting level become this low? Even this little girl can be an elder?"
Seeing the crowds, Uncle Cui motioned to Cui Yue'e not to talk too much. In recent years, the status of the Cui family had become worse and worse. Today, Cui Yue'e did not bring an invitation card and she was stopped, which was unprecedented. If she also said too much, a bunch of unnecessary hatred would be caused. Uncle Cui first walked into the hall, and Cui Yue'e had to follow into the hall behind him.
...
The exchange meeting started at nine o’clock, and at eight fifty, many people had already arrived in the hall.
The reason Gong Qingyao came early was to see if there were any people who use metaphysics to do evil, as long as the whole body was not righteous, it meant that the person was of poor character, Gong Qingyao had heavenly eyes, and she could see it at a glance.
There were many metaphysical masters here, Gong Qingyao was walking while looking at the masters who had arrived.
After Cui Yue'e came in, her eyes followed Gong Qingyao. Seeing Gong Qingyao’s eyes, she couldn’t help but snorted a bit. This little girl came in because she wanted to make friends with the masters here. It was unknown if the invitation was obtained legally or not.
...
Both Ai Xiaoyun and Qiu Yuan knew that Gong Qingyao was going to participate in the exchange meeting today. Since Qiu Yuan became Gong Qingyao’s assistant, Qiu Yuan collected all news about Gong Qingyao on the Internet. Although she did not come to the scene at this time, she had been paying attention to the news on the spot.
Suddenly she saw a message, and was suddenly excited.
...
Gong Qingyao at the meeting received a message, it was a screenshot sent by Qiu Yuan.
[Cloudless Fortune-teller: Good morning netizens. Today I am participating in the annual metaphysical exchange meeting in the capital. Please don’t blame me if I don’t respond for a while.]
Gong Qingyao put the phone back after reading the message.
...
Gong Qingyao didn’t respond for a long time, and Qiu Yuan knew that Gong Qingyao probably forgot about this person.
Previously, Gong Qingyao used Six Yao divination in the reality show. This person pointed out that Gong Qingyao’s divination posture was correct, but it was impossible to calculate the result so quickly, and he even say that it was just entertainment.
Qiu Yuan didn't know how high Gong Qingyao's metaphysical level was. When Ai Xiaoyun was free last night, Qiu Yuan begged the other party to explain to her the extend of Gong Qingyao's ability. Seeing the Weibo posted by Cloudless Fortune-teller today, Qiu Yuan really wanted to know how this person felt when seeing her Sister Yao at the meeting.
Also, after knowing Gong Qingyao's powerful metaphysical level, what kind of expression would be on the face of the this fortune-teller, the more she thought about it, the more excited Qiu Yuan became.
...
Meanwhile, Gong Qingyao walked around the hall and didn't see anyone with an evil profound energy.
At 8:55, a staff member shouted that the chairman was delayed on the road today, so the meeting would be delayed for half an hour. After hearing about it, everyone present did not show any dissatisfaction and continued to chat together in small groups.
Originally, this exchange meeting was a meeting where all metaphysical masters exchanged their experiences. It was good to be able to learn some knowledge. Of course, it would be better if they could make friends with powerful masters. So it was okay if the meeting was postponed for half an hour. They could use the time to find a great master among the invited and took the lead in asking for discussion.
Gong Qingyao was young, and the other masters here saw her for the first time, so no one came forward to greet her for a while. Gong Qingyao was happily at ease, wandering in the hall alone, casually taking a look at the Feng Shui here.
This ancient city building had been around for some years. Over time, this building had been remodeled a lot. Some fashionable elements have been added in the process of reconstruction, but although it looked good, it also destroyed some of the Feng Shui remaining in the original building. 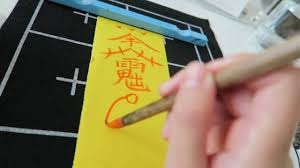 Everyone could see that the talisman paper was lightly painted. Old Feng was the one nearest the table, he seemed to be able to feel the breath on the talisman paper. His old man body was very excited, and he stammered when he spoke, "This, can, can I pick it up and take a look?"
Gong Qing Yao made a gesture of allowing.
Old Feng picked up the talisman with trembling hands. It was as if the talisman was the most precious item in the world. The people on the side said, "Old Feng, don't shake, what if it breaks?"
Wen Cheng looked at the talisman with a sluggish expression. It took him at least five hours to draw one talisman. It seemed that Gong Qingyao draw the talisman in less than a minute. And also, this talisman paper was tens of millions of times better than his. In an instant, Wen Cheng's heart was beaten to pieces. As a child from a metaphysical family, his ability was not weak, especially a small genius like Wen Cheng. Now it seemed that there were really many other masters in this world.


-----
The author has something to say:
Everyone: You, you on the line.
Gong Qingyao: Okay, let me go.
Qin Ze: Just go up, my Qingyao was not afraid of anyone.
Everyone: Stay away from our girl.
Qin Ze: Hey, why everyone dislikes me so much? I blame you author.
Stupid author: (pretending not to understand)