"Well, I thought you fainted… Bu Zhongxin said that pregnant women are particularly prone to hypoxia in the early stage… " Qin Mo almost touched the non-existent cigarette in his pocket again, but his hands were shaking. He moved away his left hand that was still pressing on the child's mother so fast as if it was scalded.
Liu Weiwei wished she could get into the system again. She didn't know what to do. But both of them were all grown-ups, so they couldn't pretend to be innocent for the rest of their lives. After getting married, what kind of married life should they live in? Of course, they could be willful and did whatever they want. However, it was difficult to escape the responsibilities and obligations of being a husband and wife.
Liu Weiwei thought she had already figured it out a long time ago that she was not the kind of person who occupied the pit but did not sh*t. She would not be able to do this shamelessly when she was married and had a husband. So, on the day of receiving the certificate, she said the words that made her blush and her heart beating fast. They needed to hold hands and hug first, and then took the next step slowly. As a lady, especially in the role of wife in a marriage, the rhythm of some things still needed to be led by her.
Seeing the Major who was stiff and even tried to walk out of the room awkwardly, Liu Weiwei sighed. "I think that since we are married, there are some things that need to be put on the agenda."
Qin Mo grabbed the door frame directly.
Liu Weiwei: …
"Hold hands and hug once a day. Kiss goodbye when going out. Spend an hour at night for chatting, taking a walk, or a date." Liu Weiwei set a 30-day plan in the majesty of the Major's eyes. "Try one month first, anyway, Dr. Bu said that I am currently not suitable for vigorous… exercise."
Qin Mo looked at the blushing child's mother, his eyes moved to her slender and white neck unconsciously. Finally, he squatted down and picked up the blonde doll that had just been thrown on the ground. He nodded solemnly. "Okay." Indeed, Bu Zhongxin said that she was not suitable to have intercourse now, her body was still weak. He was actually… at this time… was he a beast?
Qin Mo fell into a serious condemnation of himself, but soon a rumbling of his abdomen rang in the room at an untimely moment.
Liu Weiwei was stunned, covering her mouth and laughing. "Wait, cook for you." She rolled into the quilt next to her, wrapped herself in the quilt, and slowly walked towards the bathroom. The Major didn't need a direction and he immediately took the pajamas she had left in the bathroom thoughtfully. He was really better than a robot. Needless to say, he also turned around consciously.
"What do you want to eat tonight?" Talking could relieve the embarrassment between the two of them.
Qin Mo straightened the head of the doll in his hand, "Anything." After that, he added another sentence, "You can cook anything that is not too tiring. Everything you cook is delicious."
Liu Weiwei tied the last pajama strap. The corners of her mouth rose, and in a good mood, she tied a bowknot and climbed out of the bed. "Then I will make a unique, one-of-a-kind satisfying meal for you!"
When Qin Mo heard the movement, he turned around and helped put the slippers at Liu Weiwei’s feet. The rare dish name also made him raise his eyebrows. The two adjectives used as attributives in front of the dish's name made his mental power even more fluttering.
Unique…
His careful attention all his life had probably been spent on these two women who was a buy one get one free. "Okay."
…
Overwhelming sadness rice, Liu Weiwei especially borrowed the title from ‘The God of Cookery’. In fact, it was just a bowl of white rice with barbeque pork, topped with sweet soy sauce, and a poached egg. It was not a recipe from the system, it was a recipe for barbecued pork in honey, and after she learned it, she added rice. (TN: 黯然销魂/àn rán xiāo hún, idiom means overwhelming sadness. ‘The God of Cookery’, a 1996 film starring Stephen Chow.) 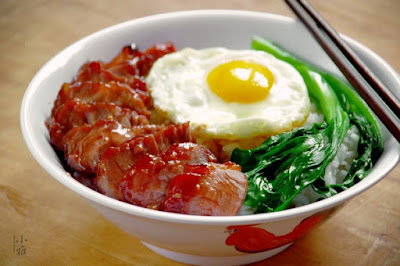 When Liu Weiwei saw the task of caring for the Major, she remembered this overwhelming sadness rice dish. The protagonist in the movie, after falling down from the altar and fell into poverty, was moved to tears because the hostess gave him a bowl of simple barbecued pork rice. He, who had tasted many foods, was stunned by the ordinary sweetness of the barbecued pork. With the ordinary softness of white rice, it warmed his mortal's heart, and this gave it the name of overwhelming sadness.
Liu Weiwei decided to cook this dish to make her Major happy.
The barbecued pork in honey sauce was a Cantonese cuisine. Liu Weiwei quickly picked out the freshest pig's hip meat from the storage room on the first floor. Activating the skill of Godhand Chef, the pork in front of her had more light and dark areas. Some areas were marked as having fascia, and some areas were marked as needing to be pierced with holes before marinating.
Liu Weiwei quickly stroked every part of the pork hip with her fingertips, comparing the touch with the prompt that the system gave in front of her. She had skills, but she didn't want to always rely on skills. She had to rely on the advantages of her skills to quickly master the hands of a Godhand Chef and become a well-deserved chef who did not rely on the system to survive.

Liu Weiwei's face instantly blushed, "Eh… Doctor Bu, I didn't faint, I'm sorry to trouble you to come here specifically, have you eaten dinner?" This situation, it was very embarrassing.
Before Bu Zhongxin spoke, he saw the Major staring at him with his arms around his chest. "I have withdrawn my first aid application, what are you doing here?"
Bu Zhongxin coughed, his eyes floated to the table slowly, the couple’s empty bowls broke his heart. I ran so fast but still hadn't caught up with the couple's dinner time.
"I was off work, and I think everyone can be more rest assured if I come over for a checkup. After all, after being discharged from the hospital, my sister-in-law has been so busy recently, so I don't know how her body is recovering." Bu Zhongxin pushed down his gold frame glasses deeply. "What do you say, Major?"
In a word, pinch the lifeblood of Comrade Major.
"Please sit down." Qin Mo's face was solemn.
The corners of Bu Zhongxin's mouth crooked up.
"You probably haven’t eaten dinner. I'll get you some nutrient solutions. What kind of flavor do you want? Say."
"!!!"