Yang Likun didn't know the relationship between the Scientific Research Bureau and the cafeteria when he arrived initially. After a shock, he finally figured it out.
Lieutenant Colonel Chen, the legendary serious scientist, came to them with a smile, and at this moment, he shook Liu Weiwei's hand enthusiastically. "Clerk Liu, you are finally here, come and take a look at the new beast we just shipped today, Level 6 Dax Beast. It was found in the turbulence of the universe when a team was sent to do search work last week."
Yang Likun was startled. The Dax Beast he encountered on the battlefield two years ago, was covered with metal-like sharp thorns, and had a grumpy temper. As long as the thorns touched a soldier's body in close combat, it could easily poke a big hole. It was a vicious beast, undoubtedly! Last year, even the Research Bureau had a proposal to list it as one of the must-kill beasts. 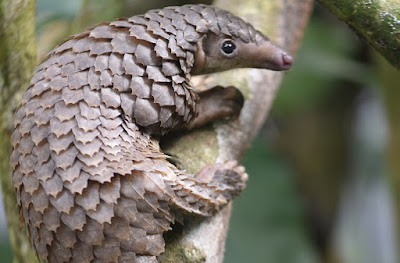 They were quickly taken into the observation room. Inside a huge transparent glass, they saw the Dax Beast struggling and even hitting the glass.
"We injected a tranquilizer four hours ago, and it didn't work on it. Two hours ago, we injected an enhanced anesthetic, but it angered it instead and caused it to be in extremely irritable aggressive mood." As Lieutenant Colonel Chen was explaining, he went over the observation data. His brows frowned even more after reading. "Its attack power is equivalent to the strength of ten aircraft crashing at the same time. The strongest glassware in our laboratory can only last for 12 hours. Now half of the time has passed, and it has not shown any signs of exhaustion. Even its strength is recorded to be constantly increasing."
Yang Likun couldn't help but took Liu Weiwei back a step away from the glass container.
"We are worried that if we injected mode medicine it will be stimulated even further, so we can only come to you for help. Within two hours, if it cannot calm down, it will be killed." Lieutenant Colonel Chen was also somewhat helpless.

Liu Weiwei nodded, "Understood, then I'll give it a try."
Yang Likun stared, try… what? He glanced at the chef's already conspicuous belly, and his hear trembled, "Clerk Liu, be careful, Dax Beast is quite dangerous, it is absolutely impossible to be like the panther outside…" But when he said this, he also found it strange that the panther was so obedient. It was like a fairy tale. Although he had been sitting in the bottom rank for a long time, he still had combat experience. At a glance, he could tell that the black panther was a Level 4 beast. This type of beast was so cruel that it could even gnaw corpses on the battlefield, but just now it acted like a domestic kitten, which was very shocking!
"It's okay." Liu Weiwei smiled, not forgetting to comfort the new cafeteria staff that was obviously nervous on his first day, "We will be outside. We won't go in." As she said this, she took out her cooking table from her space under the strange gazes of a group of scientific researchers.
"Then we'll leave first. If you need it, Clerk Liu, you can find the tester Xiao Cao." Lieutenant Colonel Chen led a group of scientific researchers to leave first.
Liu Weiwei smiled and sent them away before releasing her 'robot' rabbit from her space also.
The giant rabbit bounced and swayed as it walked, but as soon as it was released, it saw the Dax Beast inside the glass container. Instantly, its round rabbit eyes brightened with excitement.
In Yang Likun's surprised expression, the rabbit slapped its paw directly onto the glass container, and the glass was shook all over!
Yang Likun almost paled. "Clerk Liu, please tell the robot not to move randomly! If the Dax Beast escapes…" But before he could finish his words, the Dax Beast, which had been hitting fiercely inside and trying to escape, was suddenly stunned by the rabbit’s small fierce eyes.
In the next second, the Dax Beast hit its thick body on the glass, and rolled to the bottom of the container. From its paws to its tail, it didn't move. It was watching the big rabbit outside vigilantly. If the Dax Beast could speak, it must have exploded by now, the fierce Level 7 lop-eared rabbit, with a terrible expression about to tear it up and eat it…
The Dax Beast shook its tail and silently retreated to the corner of the glass container.
Yang Likun: …
"My robot has an attack chip. Comrade Yang, don't be afraid." Liu Weiwei looked calm. It was only a Level 6 beast, no better than her Xiao Bai. Of course, she only dared to let Xiao Bai out grandiosely after the beast researchers had left. When she put various seasonings on the cooking table, she glanced at the system prompts in a good mood.
[Level 6 Dax Beast: It loves to eat meat, especially the pig-type beasts. He has a grumpy personality and is good at attacking.]
[Human Friendship Meter: -100.]
[By cooking five-star pork dishes, the host will have the opportunity to tame them and made them obey instructions.]
"Tsk, another meat-loving baby." Within these three months, Liu Weiwei had made a lot of recipes. She was proficient in several pork dishes. She checked the inventory of her personal space station and quickly set the menu – pork stew with vermicelli. 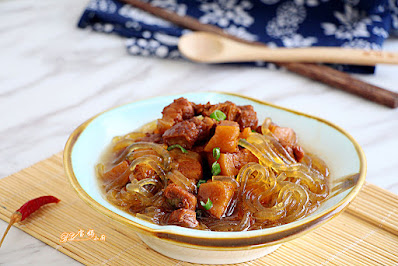 Among Northeastern dishes, Liu Weiwei especially liked this one. It was one of the four great stews from the Northeast. There was a saying that well stewed pork with vermicelli could even make howling wild wolf surrender. Although it was basically just braised pork, the taste of this dish was better than normal braised pork in her heart. When the wide sweet potato vermicelli was soaked in the concentrated gravy made from stewing pork belly, it was delicious, fragrant and smooth. It was even more delicious than the pork in the dish.
Liu Weiwei had come to the Scientific Research Bureau several times, fed many beasts, and participated in the productions of new beast feeds to a certain extent. Even meat-eating beasts needed to take in some vitamins and dietary fiber to be healthier. Adhering to this theory, she felt that the pork stew with vermicelli was the most suitable dish for the Dax Beast.
After frying some rock sugars and soy sauce into a caramel color, Liu Weiwei threw the cut pork belly into the pot until it changed color. She then put the long wide vermicelli and cooked them until it was soft, by then it had fully absorbed the rich pork gravy in the pot…
Even if the lid of the pot was closed, a seductive fragrance soon floated in the observation room.
Yang Likun standing on the side quickly became hungry again. He obviously had just eaten a lot of roast duck before, and he had also eaten some fried noodles, but when he smelled the smell of meat, he found that he couldn't hold back his hunger from returning. And soon he was attacked by a terrible thought. "This… won't be for that beast, right?"

Seeing Cao Luqun the tester next to him had a desperate look where he wanted to eat but couldn't, Yang Likun felt that he knew the answer directly.
Yang Likun collapsed when he saw the lid of the pot being opened. Instantly, the heat and aroma gushed out from the pot. Large chunks of meat and lingering wide vermicelli with attractive bright red color almost slid from the spoon into the large metal dinner plate. He drooled, but he watched the large plate being picked up by the tester. He watched helplessly as the plate was stuffed into a metal track sticking out next to them. Within three seconds, the delicious, steaming food appeared inside the glass container!
Liu Weiwei touched her belly and stroked off the fur of the big rabbit next to her. She was coaxing Xiao Bai that was always mad when it couldn't eat. She looked into the glass container with relish.
After a while, the vigilant Dax Beast stretched out its head as if sniffing the fragrance in the air. It then carefully moved forward two or three steps, its little eyes flashing wildly, as if it was hesitating and entangled. It was a pity that it couldn't resist the temptation of deadly umami fragrance in the end. Its paw slapped on the food plate and it buried its head in it.
Soon, the sound of slurping and chewing noodles came out of the glass container.
The Dax Beast was halfway eating when he noticed everyone's gaze unhappily. It raised its head a little irritably, stretched out its paws and moved the plate to its back. It turned its face toward the people and rabbit standing outside, it roared very ferociously. However, even the rough and hoarse roar couldn't restore its beastly image at this moment. Oily and translucent vermicelli was dangling on the side its sharp mouth. It looked so funny. There was a half fierce and half silly look.
Soon after, the Dax Beast sticked out its pink tongue, sucked the dangling vermicelli, and moved its sharp mouth. Its mung bean's small eyes revealed a drunken look. It was shaking its head over and over in a very enjoying mood...

For the pork stew with vermicelli, Liu Weiwei chose pork belly that was evenly fat and lean. It was stewed until the meat was tender and had a sweet taste. The sweet potato vermicelli soaked up the gravy and was more elastic than wheat flour based noodles. Not saying the Dax Beast, even the tester Xiao Cao and Yang Likun watching on the side couldn’t help but starting to chop their mouths. Xiao Bai’s incarnation as a big rabbit was even more exaggerated. Its two big claws arched towards Liu Weiwei, it began to act coquettishly and beg for food.
Liu Weiwei was amused. She couldn't reveal Xiao Bai’s cover, but she couldn't bear to favor one over another. "Xiao Cao, you observe the data, I will go to the next room to rest first."
Yang Likun couldn't even hear what Liu Weiwei was talking about. He looked at the Dax Beast stupidly and fell into a daze. The enticing smell on the tip of his nose hadn’t dissipated, and in front of him was a fierce beast that ate better than people. His outlook on life for nearly 40 years was shattered at this moment. Had it not been for the Scientific Research Bureau visit today, he wouldn't know that he hadn't eaten as good as a beast! What a painful realization this was!
"It's calm, the Dax Beast is emotionally stable! The muscles on its body have relaxed halfway, and it has begun to rest!" Soon Xiao Cao the tester excitedly reported to his superiors through his light brain.
Yang Likun staggered when he followed Clerk Liu out. Could you not calm down when you are eating super delicious food? Could you not relax? Even if it was him, he would also be willing to obey orders in exchange for delicious food, not to mention a low–IQ beast, okay!
Yang Likun walked out of the room while resisting his sorrow. He quickly sent a message in his chat group.
[Comrades, we must train hard! Otherwise, even a beast will eat better than us!]
Soon he received some responses.
[No picture no proof? It was not a rumor, just remember, that beast ate really deliciously...]
It was so delicious that he was almost moved to tears!