The Master of Metaphysics is The Movie Queen – Chapter 71

The cameraman only felt something flashed in his eyes and Gong Qingyao disappeared. The viewers also found that the window interface of Gong Qingyao suddenly became only the scenery of the island.
[F*ck, Am I stuck?]
[No, where's my signal?]
[I just seemed to hear a scream.]
[If I didn't see the leaves on the distance still moving, I would have thought that the live broadcast had been paused.]
…
The main camera was facing the cooking place at the moment, and the rest of the cameramen filmed their respective guests. For a time, there was no Gong Qingyao in all the live broadcast interfaces.
Mao Liqiang, who was sitting in front of the monitor, immediately became serious when he heard the scream. But then he thought that the recording date was calculated by Gong Qingyao, so there would be no problem. He focused on the monitor, but it was inevitable that he felt tension in his heart still.
After hearing the scream, Gong Qingyao went straight to the souce, and saw that the object of Zhong Xinyi screaming was a group of crocodiles. Yes, in front of Zhong Xinyi was a group of crocodiles, not one. The cameraman was not far away. When the crocodile was there, he lost the camera in shock.
Therefore, Zhong Xinyi’s live broadcast window was filming the ground of the island. At first, viewers thought the cameraman fell and they were still discussing, but then they heard a scream.
Zhong Xinyi's cameraman ran into the crowd and shouted, "Everyone, run away, crocodiles are coming!"
Guo Yuankai immediately threw away the firewood in his hand and ran to the boat. You Xingyu was also scared and began to follow the crowd. Yu Chuxue hurriedly followed behind. As for the cameramen, they picked up their cameras hurriedly. The no longer care and just snapped the camera and run, so all the windows of the live broadcast were all messed up for a while.
Viewers also started to brush up immediately.
[An accident happened again 666.]
[Ahahahaha, I finally saw what I wanted to see.]
[Don't gloat upstairs. It's a crocodile they met.]
[I'm so worried about my Xingyu.]
[Don't worry, my family is there.]
[Let me sort it out. At 10:37:17, Zhong Xinyi's window became a view of the island ground. At 10:38:15, there was a scream from Zhong Xinyi. At 10:38:16, Gong Qingyao disappeared from the live broadcast window. So I guess it was Zhong Xinyi and her party who saw the crocodile first, the cameraman ran away, Zhong Xinyi screamed, Gong Qingyao went to the rescue, and then Zhong Xinyi went to the camera to inform everyone.]
[Upstairs is thrilling and have godly explanation!]
......
A director’s crew watching the live broadcast on the shore of Lake Yuhai looked at Mao Liqiang's appearance. They couldn't help but wonder what to do next, after all, it was a group of crocodiles.
Previously, these crocodiles were walking towards Zhong Xinyi. At this moment, Zhong Xinyi was so frightened that she was not able to run away. She saw Gong Qingyao walking around the island, so she tried to follow Gong Qingyao to see what she was doing, but she didn’t manage to keep track. After a while, she was lost. She didn't know where Gong Qingyao had gone. Thinking about the camera behind her, she walked at will, but then strayed into the crocodile group.
When Zhong Xinyi remembered to run, she realized that it was too late. The nearest crocodile had already approached her, with a big mouth with blood. All Zhong Xinyi was able to do was screaming. She felt that she might die here today. If she knew, she would not come to participate in this reality show. As for Gong Qingyao and so on, she would not be jealous anymore. There were more actresses in this world who were more powerful than Gong Qingyao.


Zhong Xinyi's blood seemed to solidify this time. She closed her eyes in despair but it seemed that no pain had come. Then she heard a cold voice next to her, "Not leaving yet?"
Zhong Xinyi opened her eyes and looked surprised. The crocodile was gone, "Where are the crocodiles?"
"Already gone." Gong Qingyao walked forward and picked up the camera on the ground by the way.
Although the viewers couldn’t see Zhong Xinyi, they could hear the voice of the two.
[F*ck, so Zhong Xinyi really saw the crocodile?]
[The crocodiles seem to be gone.]
[No, no, this is not the point. The point is that I really heard the voice of my family.]
[So the scream was because Zhong Xinyi see the crocodile, and then Gong Qingyao saved Zhong Xinyi. The godly explanation turned out to be true.]
[666666]
[My handsome husband.]
[Over and over again saving everyone, it's clearly my husband.]
Mao Liqiang looked at the comments of the viewers and couldn't help but raised his mouth. As he though, as long as there was Gong Qingyao, there would be no problem. The staff on the side saw Mao Liqiang looked like this, and they were a little confused. Wasn’t his director the most annoyed about accidents? Some staff members had already asked why he smiled.
Mao Liqiang replied, "Isn’t everyone okay? Besides, if you look at it from the other angle, the number of viewers has doubled!"
Staff: ... It made sense, but the crocodile they encountered was a real crocodile!
Zhong Xinyi quickly followed Gong Qingyao and couldn't help but glance back. It seemed that there was a crocodile going into the water not far away. Zhong Xinyi quickly retracted her gaze, followed Gong Qingyao, and looked at the figure of the person in front of her. For a moment, Zhong Xinyi seemed to feel sourness in her eyes, people like herself were nothing but weak ants.
Gong Qingyao didn’t know and didn’t care about Zhong Xinyi’s thoughts. After she saw the crocodiles, she immediately used her profound strength to drive them away. And then she set up a safekeeping formation around the island, so threatening creatures couldn’t come in.
In the chaos, Lu Yongyi said, "Qingyao and the others were still on the island."
Someone replied, "It's important to safe yourselves first."
The captain and the others rushed to the boat. Lu Yongyi paused before leaving the island. He glanced to the jungle and found that Gong Qingyao came out carrying the camera, followed by Zhong Xinyi behind her.
Lu Yongyi smiled but then shouted, "Qingyao let’s run away, there are crocodiles coming."
Gong Qingyao said lightly, "The crocodiles are gone."
The people who were running to the boat were stunned when they heard this sentence. What? The crocodiles are gone?
Zhong Xinyi's cameraman saw that Zhong Xinyi was unharmed, so he asked in doubt, "Are the crocodiles really gone?"
Zhong Xinyi raised her head, "They are all back into the lake." But her expression didn’t seem to ease.
Everyone was stunned, but then they saw Gong Qingyao's cameraman walking out of the jungle. The cameraman saw Gong Qingyao and he rushed over with a happy face. He continued to film Gong Qingyao.
All the viewers saw that when the other six live broadcast windows including the main one were all still in chaos, only Gong Qingyao appeared in front of everyone, so they felt this was little funny.
[Although meeting a crocodile is a terrible thing, but why do I want to laugh at this moment?]
[Don't say it, I am already laughing.]
[The cameraman of Gong Qingyao doesn't even know about the crocodile.]
[No, no, although I can't see the face of Qingyao’s cameraman, but I bet he is absolutely happy at this moment.]
…
"Then, what should we do now?" Guo Yuankai had one leg on the boat and the other on the ladder, neither entering nor retreating.
Gong Qingyao said lightly, "Cook."
Lu Yongyi was originally still on the island, so when he heard this, he started to help.
Guo Yuankai retracted his legs back and walked down. Needless to say, You Xingyu and Yu Chuxue all followed. The cameramen in charge of personal shots also followed, so the six guests and their cameramen were all there. The captain and his crew would stay on the boat.
Lu Yongyi was the first to speak, "I caught some shellfish over there just now, and they will be delicious later."
"We can make charcoal grilled scallops!" After you Xingyu reacted, the other said, "But we don’t have any seasoning."
Gong Qingyao took out the leaves she picked, and explained one by one, "This has the same taste as ginger. This plant juice is salty..."
There were many plants and it was the first time Lu Yongyi had seen them. When Gong Qingyao explained about them, everyone was stunned again.
Yu Chuxue was the first to react, "So we can still make charcoal grilled scallops!" 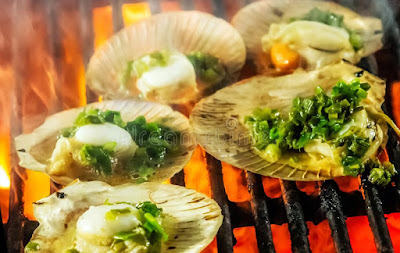 The comments of viewers were brushed.
[This is great.]
[Even if you give me a ginger, I can't recognize it.]
[Me too, I can't distinguish between leeks and green onions.]
[Qingyao is too good.]
[This program can be renamed Qingyao and her five children.]
[The previous commenter, are you serious? I am laughing to death.]
[Lololol, I'll go and laugh for a while.]
[It's clear that a crocodile appeared just now, it was a terrible thing. But why has it suddenly become a funny thing?]
...
At first, some people were a little frightened, but after realizing that there were no crocodiles anymore, they all relaxed. These shellfish products were all wild. During the cooking process, everyone smelled the umami fragrance.
Guo Yuankai, who was not very energetic originally, was also interested. After he killed a fish, he asked, "I'm so hungry, how long will this take?"
"Almost." Lu Yongyi gave the scallops some salty water.
You Xingyu asked, "Do I need to add firewood?"
"Add a little more." Lu Yongyi said.


You Xingyu added some firewood to the fire.
Yu Chuxue put all the plates from the boat. Zhong Xinyi on the side also found six cups, and then filled each cup with water.
As for Gong Qingyao, she stood on the edge of the lake. Everyone subconsciously thought that she must have a reason to do so, but Gong Qingyao actually just simply stood there and watched the scenery. The scenery in Lake Yuhai was different from other places, so it seemed more open.
Lu Qianqian, who was standing next to her, asked, "Master, why did you save Zhong Xinyi? She is not a good person."
Gong Qingyao made the microphone could not transmit her voice for a while. She stood there and looked at Lu Qianqian, "If it's you, would you save her?"
"Me?" Lu Qianqian said, "Of course I don't..." But she didn't seem to be able to say it. If she had the ability to save someone, but she didn't, and just watched a person die in front of her, in all fairness, she really couldn't do it, even if this Zhong Xinyi person was very annoying.
"But she is really annoying." Lu Qianqian said, she was very unwilling to save Zhong Xinyi like Gong Qingyao.
"Did she do anything to harm me?" Gong Qingyao asked.
Lu Qianqian thought about it carefully. This Zhong Xinyi was really hateful, but she had not done anything to harm Gong Qingyao. Gong Qingyao didn't care about those who were not bothering her directly.
"But, but..."
"Do you think I save her so easily?" Gong Qingyao asked.