The Master of Metaphysics is The Movie Queen – Chapter 72

Lu Qianqian's thoughts were exposed, and she directly admitted, "Yeah."
"Everything in the world, the good will be rewarded and the evil receive retribution," Gong Qingyao said again.
"But I didn't feel that she suffered any retribution." Lu Qianqian muttered, obviously a little unhappy that Zhong Xinyi was saved so quickly.
Gong Qingyao asked, "Out of so many people, why did she alone meet the crocodiles?"
Yes, and it was not just one crocodile, but a group of crocodiles. "The master seems to make sense." Lu Qianqian was immediately happy.
Gong Qingyao continued to look at the water without speaking any more. Lu Qianqian also looked at the water in front of her. Suddenly, she felt that her mood seemed to have changed.
"Is it going to rain?" You Xingyu asked, trying to protect the food being cooked.
Lu Yongyi also went to help, and then he glanced at the sky. The storm on the water was a bit scary, but it seemed that the sky hadn't darkened yet, and he obviously couldn't understand the weather before him.
Yu Chuxue on the side said, "Why do I feel so cold?"
The cameramen were also busy protecting the cameras. When everyone was blocking the wind, no one saw Gong Qingyao made a few gestures with her hand, and the wind stopped instantly. Gong Qingyao asked Lu Qianqian back into the ring. She didn't want Lu Qianqian to be out at this time.
"Hey, why did the wind suddenly disappear?" You Xingyu asked, Lake Yuhai's weather was too unpredictable.
Lu Yongyi and others shook their heads.
Guo Yuankai was in a bad mood originally, so he said, "This weather is just like a woman. It changes when it want to." Viewers exploded when they heard this sentence.
[F*ck, what does Guo Yuankai mean?]
[Is this discrimination?]
[I think he was right.]
[Nothing to say, passers-by turn dark.] (TN: passerby = non fans, turn dark = become anti fans/haters.)
...
Yu Chuxue looked at Guo Yuankai and reminded him, "Yuankai, be careful. What you say will cause public outrage."
Guo Yuankai reacted and said immediately, "I didn't mean every woman, just some." As if thinking of something, he added, "For example, our Qingyao is not like that."
Zhong Xinyi and others found that Guo Yuankai was facing a challenge this time so he gave Gong Qingyao a little extra flattering.
After Lu Yongyi arranged again ingredients that had been messed up by the wind just now, he raised his head and said, "I agree with Yuankai."
You Xingyu also said that Gong Qingyao was not like other woman. To everyone's expectations, even Yu Chuxue and Zhong Xinyi also agreed. Viewers found that in this challenge, the team seemed inexplicably harmonious.
"The scallops are ready," Lu Yongyi said, and everyone hurriedly sat around the fire.
Lu Yongyi originally planned to pass the first one to Gong Qingyao, but everyone was too fast, and everything was gone instantly. But he then saw Zhong Xinyi picking up the plate and walked to Gong Qingyao. She handed the scallops to Gong Qingyao, "Thank you for just now."
"No problem." Gong Qingyao took the scallops and began to eat it. They were really fresh, plump, and very tasty.
Lu Yongyi on the distance saw Gong Qingyao eating and his expression was very happy. Since Gong Qingyao liked to eat scallops, he would search for more later.
When Zhong Xinyi saw this, she returned to her original seat. Although Gong Qingyao's expression was as cold as before, she knew that Gong Qingyao did not remember anything bad she had done before. If Gong Qingyao looked back at this moment, she would find that Zhong Xinyi's face had quietly changed.


After everyone happily ate an abundant seafood meal, they decided to play around. Although the weather was still a bit cold, it was already spring after all. They rolled up their trouser legs on the beach or caught more foods.
It darkened quickly, and everyone hesitated whether to cook dinner on the island or go back to the boat.
You Xingyu asked, "Qingyao, is it safe on the island at night?" He still wanted to cook dinner on the island, but he knew that there were crocodiles. If the crocodiles attacked at night, how would they escape?
Gong Qingyao replied decisively, "Safe."
"Then let's have dinner here and then go back." Lu Yongyi said.
Since Gong Qingyao said it was safe, everyone was willing to stay on the island.
In the afternoon, Lu Yongyi went to catch some more scallops. In the evening, there were more scallops, so Gong Qingyao ate more. At lunch, Lu Yongyi carefully discovered that among all the food, Gong Qingyao ate scallops the most and conch the least.
You Xingyu liked to eat conch. When eating dinner, he asked, "Hey, why are there so few conchs at night?"
Yu Chuxue replied, "If you want to eat, dig it by yourself tomorrow."
You Xingyu: ... Obviously this was not the case at the beginning.
The viewers also laughed.
[My Xingyu's status is too low.]
[No, no, do you remember the beginning? You Xingyu is clearly the most popular.]
[What do I think is this now? The first issue was all scripted before.]
[I also like it better now.]
[You Xingyu's grievance gif picture is made. If you need it, get it on You Xingyu's official support club Weibo.]
...
After dinner, everyone returned to the boat to rest.
When they were on the island, everyone washed a little with sea water. After returning to the boat, they could rest directly. Yu Chuxue and Zhong Xinyi both waited for Gong Qingyao before going in.
Gong Qingyao: ???
Yu Chuxue said, "You can take the sofa, I will sleep next to Xinyi on the floor."
There was only one sofa in the room. Gong Qingyao went directly to the sofa, while Yu Chuxue and Zhong Xinyi lied down beside the sofa all night till dawn.
When everyone woke up, they didn't know where the boat was floating. After everyone got back on the boat last night, the captain took the reins. The island was gone now.
Guo Yuankai looked at the endless water in front of him, "Fortunately, Yongyi had the vision yesterday and brought a lot of ingredients."
"Yes, otherwise we can only eat fish today." You Xingyu said, although the fish was delicious, he couldn't bear to eat that all day.
Yu Chuxue also walked to the deck, "More importantly, we have firewood."
"Morning, Chuxue." Everyone said hello.
"Morning." Yu Chuxue was also in a good mood.
Everyone greeted each other, and then began to work together to cook breakfast. Zhong Xinyi suggested, "Every time we cook, it’s either Yongyi or Qingyao. It’s too boring. We should each take turns to cook one dish." Since Hongyan Village passed, there hadn’t been time for each guests to cook a dish
"Okay." Guo Yuankai agreed.
Yu Chuxue said, "Let’s have a good punishment for bad job."
Everyone froze for a moment, and then Zhong Xinyi said, "I agree with Chuxue."
"I cannot seek help?" You Xingyu asked weakly, he really didn't know how to cook.
Yu Chuxue thought for a while and said, "You can only ask for help verbally. What do you think?"
"What is the punishment?" You Xingyu was more concerned with this.
"If it's unpalatable, eat it all up!" Zhong Xinyi said, "What do you think?"
"Okay!" Anyway, there were many ingredients, so everyone could do it.
Lu Yongyi made steamed scallops. Guo Yuankai chose a few crabs for steaming and it was considered done.
One of the ingredients brought on board were conch. You Xingyu remembered how Lu Yongyi made it, so he chose the conch, blanched it, and added some seasoning. This was also considered complete.
Yu Chuxue chose prawns. After Lu Yongyi was done with his scallops, she put the prawns on top and steamed them. Zhong Xinyi looked at the remaining ingredients and chose fish. She also chose the steaming method.
Guo Yuankai shouted, "Ah, not steamed again ah!"
Everyone was busy until they found that Gong Qingyao was gone, You Xingyu asked, "Where is Qingyao?"
They then saw Gong Qingyao on the outside deck. When they walked in, everyone found that she was holding a pile of things in her hand. The sharp-eyed Zhong Xinyi blurted out, "This is a squid?"


Gong Qingyao nodded. Lake Yuhai's squid was very fresh. Gong Qingyao walked to the cutting board. Everyone saw Gong Qingyao gently pulled the squid's whiskers, and its internal organs plus light bones came out. Gong Qingyao tore off the black film from the squid body before she was ready to start cooking.
Watching Gong Qingyao's movements, You Xingyu looked forward to Gong Qingyao's squid dish in his heart.
Gong Qingyao skewered the squid on an iron stick, and then directly grilled it on the fire. Yesterday, there were some salty stems, which then used to season the grilled squid.
The viewers heard the sizzling noise, but the guests in the room could smell the fragrance, "Ahhhhh, I feel that this squid will be delicious." Zhong Xinyi couldn't help saying.
"What is this yellow one?" Yu Chuxue asked.
"It's squid eggs!" Lu Yongyi was a little surprised. "This Yuhai squid is very fresh, so there will be eggs."
Zhong Xinyi was surprised, "This is the first time I have seen squid eggs."
"Me too!" Yu Chuxue said.
In fifteen minutes, the appearance of the squid turned golden, which means that the squid was done. Gong Qingyao handed a string to each person, and You Xingyu took a bite, "Wow, it's hot." 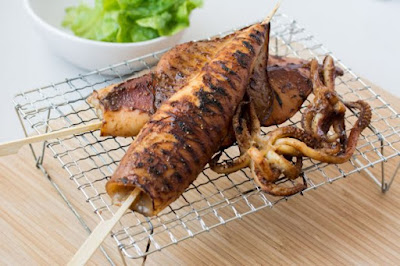 Guo Yuankai on the side also knew it would be hot, but he couldn't help but bit down, "Ahhhhhhhh!" Guo Yuankai swallowed the squid in his mouth, "I tell you, I screamed not because it was hot, but because it was delicious."
Compared with the men, Zhong Xinyi and Yu Chuxue ate a lot more elegantly. After Yu Chuxue took a bite, she repeatedly said that it was delicious. Zhong Xinyi deliberately put the squid in front of the camera, "I tell you, this squid meat is very tender, and but also very chewy. One bite, the aftertaste on the mouth is endless!"
They didn’t know if Zhong Xinyi deliberately said this to the viewers or to the cameraman. Probably only Zhong Xinyi knew in her heart.
Lu Yongyi stood next to Gong Qingyao and ate the squid silently. He watched the other five people's exaggerated appearance, and wanted to laugh. But he admitted that the grilled squid made by Gong Qingyao was really delicious.
The squid was delicious, and the weight of one squid was not small, so everyone just ate some of the other prepared dishes, and the rest was put aside for lunch. As for the punishment, everyone had long ignored it.
After eating, everyone came to the deck and looked at the water in front of them. Yu Chuxue asked, "Do you remember when we were surrounded by traffickers in Ye Mountain? I was really scared to death at that time."
"This is not an exaggeration. But I think I have a deeper memory for the filming in X County." Guo Yuankai remembered that they met ghosts that time.
The other didn't seem to be able to talk more about that recording, so You Xingyu went on to say, "Come on, the most terrifying is Qianping, okay." That big monster, who would believe it?
Everyone was silent, and they seemed to also not be able to talk more about this topic. For a while, the guests were silent, but the sensitive viewers discovered that something was wrong.