The Master of Metaphysics is The Movie Queen – Chapter 59

Of course, Gong Qingyao's performance was at the bottom in the interpretation class. After all, Gong Qingyao, who had a cold face for thousands of years, it was really difficult for her to smile brightly and cry sadly deliberately. Gong Qingyao thought that the previous filming of Master Qingyuan could pass smoothly was because of her original nature. If the role was changed to Jiang Feimeng or Yin Yiyi, Gong Qingyao really couldn't guarantee that she would be successful. And if she wanted to get the Movie Queen title, it was not very reliable to just rely on acting as a master.
After one day of training, Fang Jiayue called, "Qingyao, Xiaoqing's words are exactly the same as you said that day." Xiaoqing learned that Fang Jiayue had spoken to the company, and after ‘The Legend of the Song Dynasty’ was over, she could participate in the agent's assessment. Xiaoqing felt even more regretful, but there was no regret medicine in this world.
Gong Qingyao was not surprised at this point.
Fang Jiayue seemed to have recovered from her sadness, "By the way, how did you know?"
"A person's face can tell their whole life." Gong Qingyao said.
"You can see people through at a glance?" Fang Jiayue said, "Why do I feel a little scared?"
"Yeah." Gong Qingyao said, so it was impossible to lie in front of a metaphysical master.
Fang Jiayue did not continue to talk about this topic, "Your last scene should be about to start."
"Well, there are still a few days." Gong Qingyao said.
"Then what are you doing recently?" Fang Jiayue asked.
Gong Qingyao briefly talked about her recent training.
Fang Jiayue didn't expect that Gong Qingyao, who auditioned so well at the time, had never acted before. She was shocked for a while, and then began to talk about her own acting journey on the phone.
Gong Qingyao was inexperienced, so she wrote some tips down one by one.
"That was enough for tonight, let's continue tomorrow." Fang Jiayue said.
"Thank you." Gong Qingyao hung up and went to rest.
Fang Jiayue didn’t think there was anything much. She could see Gong Qingyao wanted to learn, she also saw that Gong Qingyao had great potential, and most importantly, Gong Qingyao had saved her life, otherwise she wouldn’t even be here to say these things now.
A week later, Gong Qingyao finally caught up with everyone in the interpretation class.
After an hour of evening training, Gong Qingyao returned to her room. Ai Xiaoyun knocked on the door and walked in. "How do you feel during this time?"
Gong Qingyao said, "It's pretty good." At least she really had learned a lot of knowledge. Although training was not only for how to act well, but also for dancing and singing, it had a certain use on the entertainment industry.
"Tomorrow is time to join the crew again." Ai Xiaoyun said, "It will be Master Qingyuan's last shot."
"Okay." Gong Qingyao remembered the schedule.
"Then you rest earlier." Ai Xiaoyun said, "I had asked the teacher for leave, and I will pick you up tomorrow morning."
"Okay." Gong Qingyao went to rest after taking a shower.
On the next day, Ai Xiaoyun drove Gong Qingyao to the crew. Because of the previous experience, after arriving at the crew this time, Gong Qingyao asked Ai Xiaoyun to go back first.
Gong Qingyao went to the fitting room first, and then went to the dressing room to change. Within half an hour, the image of Master Qingyuan reappeared and Gong Qingyao went to the filming set.
The scene currently being filmed was between Fang Jiayue and Ji Wen. The acting skills of the two were equal. If people had to say, Fang Jiayue was slightly better.


In a moment, the victory or defeat on the field came to a reversal. The seventh prince took the opportunity to let everyone capture the fourth prince, and Master Qingyuan left silently at this moment.
"Pass!" Song Anxiang shouted, this one was really great.
The tension and affection on Fang Jiayue's face was very good, and Ji Wen showed the disappointment and despair when he learned that his brother was such a person. More importantly, Master Qingyuan played by Gong Qingyao completely performed her magnificent aura. The scene where she fell from the sky just now was really cool, and it really looked like a god.
Thinking of this, Song Anxiang gave the wire staffs a thumbs up. Gong Qingyao's decline was very stable. For Song Anxiang, it was quite difficult for a novice to use wire, so all that just now must be the credit of the wire staffs.
But the wire staffs were all dumbfounded at the moment. When they went to pull, they found that Gong Qingyao could be pulled up really easily. Everyone was thinking it was their first time lifting such a light actress. 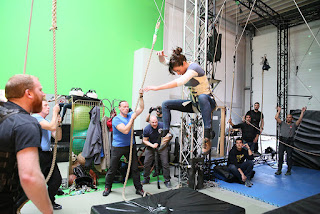 When Gong Qingyao reached a certain height and was about to go down, everyone found that it was even lighter, as if they hadn’t pulled anything, so some people hesitantly let go of the wire. After several staffs let go, they found that the actress did not even rely on the wire at all.
In other words, the actress really flied?
For a time, the wire staffs felt that they had discovered something extraordinary.
-----
The author has something to say:
Wire staff 1: Am I becoming a strong man?
Wire staff 2: No, I seem to have hallucinations.
Wire staff 3: Damn, this person can really fly.
Wire staff 4: Are we going to be unemployed?
Wire staff leader: Get out!