The Master of Metaphysics is The Movie Queen – Chapter 78

After Gong Qingyao returned home, she continued to refine the wooden sign, as she had to rush to Shancheng tonight, but fortunately Qiu Yuan was there to take care of the miscellaneous matters.
Feifei saw the wooden sign and came over curiously. During the time Gong Qingyao was filming in Shancheng, Feifei was playing around Light of Hope Community. At present, the animals in the area all respected Feifei, whether they were domesticated or stray, no matter it was a dog or a cat, or a bird, or any other creatures.
Feifei patted the wooden sign. He seemed to feel the yin inside and immediately became alert.
Gong Qingyao touched Feifei’s fur, "This wooden sign is indeed not an ordinary object. I am refining it."
Hearing this, Feifei condensed his breath and tapped on the sign. He then twisted his butt and left Gong Qingyao's bedroom.
Gong Qingyao shook her head and picked up the wooden sign to continue refining. As soon as she infused a trace of profound energy to the sign, Gong Qingyao was surprised to find that Feifei's tap just now broke the seal on the sign.
The seal on the wooden sign was very strong and Gong Qingyao only able to go through a small crack on the seal while refining. After Feifei broke the seal, Gong Qingyao's refining speed would be much faster.
At four o'clock in the afternoon, Qiu Yuan came over with a very hearty snack, "Sister Yao, the plane departs at nine o'clock in the evening. We can have dinner slowly, and then go to the airport." Light of Hope Community was an hour and a half away from the airport. Even if they needed to arrive at the airport two hours in advance, they still had enough time.
"Okay." Gong Qingyao sat at the dining table.
"This is sliced duck, it's delicious." Qiu Yuan opened the insulation box, "but a while has passed, so probably not so crisp anymore."

"No problem."
"This is fried chop rice cake (TN: 驴打滚)." Qiu Yuan bought many snacks, and Gong Qingyao ate some of each. But probably because Qiu Yuan had bought too much, even with the combined efforts between the two, there was still some left. 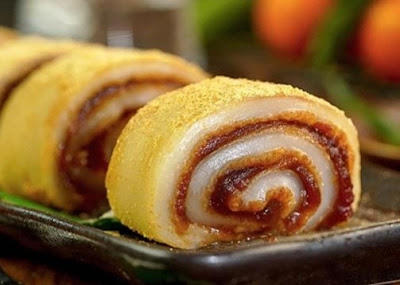 Qiu Yuan said, "Next time I will remember our capacity." After all, it was shameful to be wasteful.
When the two arrived at Shancheng, it was already 10:30 in the evening. Gong Qingyao and Qiu Yuan returned directly to the hotel.
On the next day, as soon as Gong Qingyao finished her practice, Qiu Yuan came over with breakfast. Standing outside the door, Qiu Yuan looked happy, "Sister Yao, there is great news."
The bruise under Qiu Yuan's eyes was a bit heavy, as she had stayed up late last night, but even this couldn't conceal her happy look. Qiu Yuan went into the room and said, "Last night at 11 o'clock, the staff of Buyi posted a Weibo, did Sister Yao see it?"
Gong Qingyao began to pick up her chopsticks to eat, "No." They arrived late to the hotel, so Gong Qingyao just washed up and directly rest.
Qiu Yuan quickly took out her mobile phone and opened the Weibo post of Buyi staff member, "Sister Yao, look at this."


Qiu Yuan was angry when she saw this. It was obvious that Gong Qingyao asked for leave because she was recording the wild survival reality show, and NGs were because of Tang Jing. But if she just said that, fans might not believe her, let alone netizens. Qiu Yuan rolled around on her bed in anxiety.
As a result, when Gong Qingyao went to the filming set after breakfast, Qiu Yuan didn’t say anything. At noon after filming, Gong Qingyao found that there was a missed call, plus two text messages on her phone. The missed call was Guo Yuankai’s and the text messages were also sent by Guo Yuankai, one was his 100,000 yuan transfer notification, and the other message was, ‘Thank you Qingyao, my sister is already cured!’
These few words directly transferred Guo Yuankai’s excitement. After Guo Jie drank the last glass of talisman water today, the family decided to take Guo Jie to the hospital for another check up.
During the CT scan, everyone was very nervous. When the results came out, everyone discovered that the hemangioma in Guo Jie's brain was gone! Over the past three days, Guo Jie's complexion had also gotten much better. Everyone in Guo Yuankai's family who originally didn't quite believe Gong Qingyao, immediately discussed the acceptable remuneration for Gong Qingyao. The amount was also agreed by everyone.
Gong Qingyao didn’t reply the message.
Qiu Yuan was very anxious when she saw her artist sitting quietly aside. Only Gong Qingyao knew, Lu Qianqian who was on the side was chatting nonstop.
"Master! The Buyi thing is done by someone, I guess the person contacted Buyi, otherwise Buyi won't clarify so quickly. The continuous hot search is a free publicity for them."
"So after Buyi matter is resolved, don't you want to clarify the big-name issue yourself?"
"Master, you didn't play big-name at all, look at how bad the internet opinions are."
"Master, don't you really care at all? All of these are slander! It's slander!"
Lu Qianqian whined for a long time, but she saw Gong Qingyao showing no response. Finally she couldn't help asking, "Master, do you even still want to be a movie queen?!"
Gong Qingyao finally reacted.
-----
The author has something to say:
Everyone: Why are you so obsessed with the movie queen title?
Gong Qingyao: Gentleman promise.