Not long after Liu Weiwei's booth was set up, the line was already very long. But everyone was a little at a loss seeing the discount offer. Did they have to make comment when they buy something, and the comment had to contain specific praise? This idea was quite new to people of Interstellar era.
The key was that they could get a 20% discount. The price of crayfish was 1,000, so they could buy one mapo tofu with the remaining 200 after the discount. Regardless of the weird requirement, they all decided to give it a try.
The uncle in the very front was wearing a tie, he probably took the time to surf the Internet before going to work, "I'll come first. This mapo tofu is numbing and spicy, very hot and very fragrant. If I have to use other word to describe, it was tender, and there is also a power that makes it so delicious that it makes people want to die... How about it, the stall owner, did I pass?"
Liu Weiwei took a look at the task progress from the system. The original six completed out of eight essential tastes had now shown seven. It could be seen that the method she came up with temporarily was useful, although rather scary. She immediately smiled and nodded to the uncle, "Pass. Uncle, do you want anything else? The rice is in that bucket and you can take it yourself. Would you like a portion of thirteen-flavored crayfish?"
"Yes yes, I'm opening your video link." Zhu Ya, who was rushing to work, wiped the non-existent sweat on his forehead, and opened the video anxiously. In fact, he had only ten minutes before he had to go to work, and there would be a very important meeting right away, but he was too stressed, so he wanted to come to Skynet first.
Zhu Ya didn't expect to bump into this delicious mapo tofu. Since the last time he ate it, he dreamed of the taste of this dish all night, and found that the pillow was full of drool the next morning. The side effect was, he was absent-minded at work after that day. He even had no appetite for the luxurious nutrient solution package provided by his company. Today, if he could eat a bite of Mapo Tofu before an important meeting, he felt that a good mood would accompany him all day. So he immediately ran over to line up, but then he was pleasantly surprised to find that the girl had a new dish, and of course he couldn't wait to try it. But when he opened the video link, he was stunned.
The quaint music soon sounded. "Taihu Lake is beautiful, Taihu Lake is beautiful, the beauty is in the water of Taihu Lake..." (TN: Song here, video about the lake here) 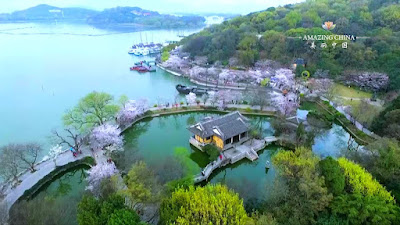 Taihu Lake?
Zhu Ya works in interstellar modern architecture firm, so he also had studied some ancient famous buildings. This Taihu Lake was a scenic spot on ancient earth that was destroyed thousands of years ago. And the typical water village that appeared in the video, as well as the cultural heritage-garden architecture, which could no longer be reproduced, surprised him as a professional.
"This is..." Zhu Ya couldn't help but look at the stall owner's sister.
Liu Weiwei smiled, "It was the Jiangsu Garden on ancient earth, a typical residential civilization at that time. Moving to change the scenery, recreating the universe within a short distance*, today's crayfish was abundant in this beautiful place – Jiangsu." (*TN: 移步换景，咫尺之内再造乾坤/Yí bù huàn jǐng, zhǐchǐ zhī nèi zàizào qiánkūn, official description of Jiangsu Garden.)

"It's terrible, isn't it?"
There was even a young white-collar girl who was so scared that she slapped the crayfish to the ground.
But fortunately, Liu Weiwei was prepared. Because she didn't put tables and chairs, she was very worried that the food of the guests would fall on the ground, which would be wasteful and could destroy the environment. So she rented a cheap intelligent robot in advance and it waited by her side. The thirteen-flavored crayfish that fell, was immediately caught by the robot.
"Madam, your dishes." The robot handed it to the girl, very gentlemanly, "Please be careful."
The white-collar girl was almost crying, but she dared not reach out to pick it up until there was a sound of exclamation from her side.