The Master of Metaphysics is The Movie Queen – Chapter 18

Gong Qingyao rejected, Ai Xiaoyun said, "Why don't you go? Even I know on Shanggu they are the most famous and the oldest."
Gong Qingyao said sincerely: "No money."
Ai Xiaoyun and Zheng Yuan: ...
It made sense.
Zheng Yuan suggested, "Then go to Hongzhi Pavilion."
After all, he liked Gong Qingyao and went to a shop that Lao Zhang didn't like.
Compared to other quaint shops, this shop was very simple.
Walking into the shop, Ai Xiaoyun shouted, "Wow, although this shop is simple, it feels so comfortable."
"There is a feng shui array here." Gong Qingyao replied.
Zheng Yuan’s respect to Gong Qingyao rose, thinking that she even knew these. "It is true, this is the Hongzhi pavilion opened by Master Liao Yehong."
Liao Yehong was a metaphysical master with some name in the Capital. He was very rich originally and was a fan of metaphysics since he was a child, so he has collected many good things. Liao Yehong was an upright person, so many people who don't understand metaphysics would come here to buy. In addition to fortune-telling, they would also buy some talisman.
"It's so amazing." Ai Xiaoyun said. She did not believe these this before, but these weird dreams made Ai Xiaoyun begin to believe that there were really metaphysics in the world.
Gong Qingyao said, "It's just a low-level geomantic formation."
In addition to Lao Zhang and Lao Chen's house in Shanggu Street, there were some shops that had some simple formations, but the Feng Shui array that every family talks about was better on several place such old Chen's houses, but there were also some that were not good.
"Low-level?" Ai Xiaoyun was shocked.
"What were you yellow haired girl talking about?!" A loud voice came out, and a middle-aged man came out of the back. This feng shui formation was made after his master gave instructions. If he claimed it was the number one in the capital, no one would dare to oppose it. The girl said it was just a low-level feng shui array, and Liao Yehong, who had always respected his master, couldn’t stand it.
Zheng Yuanzu came forward to Liao Yehong to apologize, "Master Liao, we were abrupt."
Liao Yehong snorted coldly.
Gong Qingyao said, "One, I am not yellow haired, two I am not a little girl, three the magic circle here is indeed very low-level."
Liao Yehong fumed. Ai Xiaoyun wanted to hold Gong Qingyao and drag her away. Zheng Yuan didn’t know that it was wrong to bring Gong Qingyao here today. He might have offended Liao Yehong. The gain was not worth the loss.
Liao Yehong said again, "Ignorant child!"
"What is the attribute of the door?" Gong Qingyao asked suddenly.
Liao Yehong remembered, his master once said that the attribute of the door is Yin, so he answered, "Yin".
After speaking, Liao Yehong felt that he was answering this little girl's question. Gong Qingyao nodded, "You are still a bit knowledgeable."
Liao Yehong almost vomited blood, Gong Qingyao said, "Since it is yin, why not open the door on outwards?"
Liao Yehong choked. Yin-yang balance was the basic standard of Feng Shui. The door seemed to be really opened in the wrong direction. Liao Yehong opened his mouth, not knowing how to answer for a long time.
Zheng Yuan heard all of this dumbfounded. This question, Master Liao was silent, it seemed that the little girl was really not simple.
Gong Qingyao asked, "What are the Four Spirits?"
Liao Yehong replied, "Blue Dragon, White Tiger, Phoenix, and Tortoise." 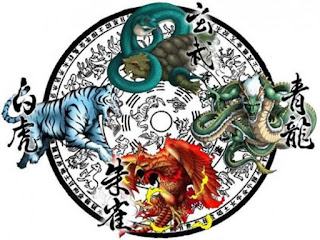 Gong Qingyao stretched her finger to the bonsai on the inclined plane, "Then why is it placed so high?"
Liao Yehong was stunned again, and his face also faintly began to flush.
"Such low-level mistakes are made, but still not admit that this level of formation is low."
"I..." Liao Yehong was at lost for a long time. He didn't know what to say, and his face flushed.
Ai Xiaoyun on the side looked at Gong Qingyao with big eyes, her Gong Qingyao was really an expert!
Gong Qingyao talked a lot today, just because this was the first time she had seen fellow metaphysics practitioner since her rebirth, and her opinion on the other side was that he was a decent person, so she said a few more words.
Zheng Yuan's mood today was a bit up and down. He realized that this little girl was more powerful than he thought. At this moment, Zheng Yuan truly regarded Gong Qingyao as a master.
Gong Qingyao didn't say much, turning around to see what was sold in the store.
Liao Yehong almost didn't want to allow the party to be in his store. He was completely criticized. However he couldn’t have any problems with himself, as every sentence said by the other party was true.
Seeing that Liao Yehong was still standing there, the staff on the side whispered, "I'll accompany these guests, you go to rest."
Liao Yehong glared at the employee, then walked to Gong Qingyao. He did not apologize.
Gong Qingyao focused on browsing one item. Zheng Yuan was next to Ai Xiaoyun. They didn’t know anything about these materials. She just looked at the store. Although Zheng Yuan heard that the items in Hongzhi Pavilion were good, he rarely visited. So he followed Gong Qingyao to look at the merchandises seriously.
Liao Yehong followed, silently thinking about what to say.
Gong Qingyao stopped before the innermost cabinet, and then squatted down.
Ai Xiaoyun saw the iron plate gathered together under the cabinet. Ai Xiaoyun was puzzled. "This is like an iron plate. Is there anything special?"
This question might be asked by ordinary people, but Liao Yehong would not answer it. At this time, he finally came back to his senses and squatted down, "It's a thousand-year-old cold iron."
Zheng Yuan and Hongzhi pavilion’s employees on the side: ...
Who was this squatting man? What about the master arrogance? What about the cold eyes?
Gong Qingyao nodded slightly, "It's just that the evil spirit is too heavy, it must be from a cold place."
Liao Yehong, "It's true, he came from a cemetery." His five elements belonged to water. This iron could actually be forged into a magic weapon and would have a great courtship for him. It was a pity that the evil spirit was too heavy. When this cold iron was dug out that year, a man died in a catastrophe, and his master couldn't resolve the evil spirit, and he reluctantly used a seal on the iron to contain the evil in this thousand-year-old iron in every possible way, and kept it here."
"How much is it?" Gong Qingyao found among all the goods in the shop, this thousand-year-old cold iron alone had no price.
If it was ordinary people, Liao Yehong would say it was not for sale. But this girl looked like an expert, so he couldn’t help but feel embarrassed. "It’s usually not a matter of price, but this cold iron is too strong. My master put it here and used the formation to control it. If someone touched it, the evil spirit will found this person." If not, Liao Yehong would have started using it for himself.
Perhaps others were afraid of being suffocated, but Gong Qingyao was not afraid. "No problem, you say the price."
Liao Yehong understood that Gong Qingyao was interested in this thousand-year-old iron, and he thought for a while, "In this way, if you can take away this thousand-year-old iron, I gave it to you."
Gong Qingyao agreed.
This thousand year old cold iron was covered with evil spirits, so Liao Yehong also locked it from the outside. Once he opened the glass door, a gloomy air came out. It was summer, but they felt extremely cold.

Sure enough, this evil spirit had a little effect on Gong Qingyao. Liao Yehong was shocked. When the master sealed the iron, he simply touched a piece of the iron for a moment, and Liao Yehong remembered the bitter coldness.
"Thank you." Gong Qingyao picked the cold iron on her hand.
Although Liao Yehong was reluctant, he really couldn't use this treasure. "A gentleman must do what he says, and the treasure of the day is matched with an expert."
At the beginning, Gong Qingyao was called a yellow-haired girl and an ignorant child, but in a blink of an eye she became an expert, and Zheng Yuan was shocked by this hypocrisy.
Liao Yehong guided Gong Qingyao and her party until the gate, before Gong Qingyao turned around she said, "Lower the hanging basket by two inches, move the table three inches to the right, and if possible, cut the bookcase by three inches." After that, Gong Qingyao left.
Liao Yehong went back inside immediately and looked at every place Gong Qingyao mentioned. Two employees stood there. Just when the employees thought they had the master’s anger, Liao Yehong suddenly looked excited. He then got up and dialed his master's phone with a happy face.
These things were witnessed by Hongzhi Pavilion’s employees, and they had to reassure themselves that their Master Liao was not crazy.
After coming out from the pavilion, it was early evening. Gong Qingyao got what she needed for free today and was in a very happy mood. She said, "There are restaurants around, I will invite you two to dinner."
When Zheng Yuan heard this, he immediately said, "I just knew that there is a nice restaurant nearby, although it was not too famous" This master wanted to invite him to eat, so Zheng Yuan has no reason to refuse.
"Good." For Gong Qingyao, popularity is not important, as long as it tasted good
Zheng Yuan guided them deeper to Shanggu Street and avoided the tourists. The door of this restaurant was just like the door of an ordinary home. There were not many people. Although it was in the downtown area, not many people were here.
After Zheng Yuan entered, an entourage came up immediately, "Welcome."
"Hello, please give us a quiet location." Zheng Yuan.
The waiter said, "Please come over."
Ai Xiaoyun whispered, "It feels so comfortable here, too. Is it also a formation?"
Master Gong Qingyao felt the owner of this place was leaning to wind, different from Liao Yehong’s water formation. It was really pleasant to stay here, but for some reason, Gong Qingyao found it weird. She was inexplicably interested in this restaurant but didn’t know the reason.
Zheng Yuan advertised the scenery to them, and introduced, "The restaurant method is acquaintances bring acquaintances."
Gong Qingyao scanned around and got close, "Do you know all these people?" When the call came in, Zheng Yuan called out the only person.
"Well, the guests here are all from Shanggu Street." Zheng Yuan replied.