The Master of Metaphysics is The Movie Queen – Chapter 21

"The cave is on the rocky mountain." Wu Tiezhu explained to everyone as he walked. "Because the mountain is mostly rock, it is called Yan (岩/ Yán = Rock) Mountain. As you have see, Hongyan Village is surrounded by mountains on all sides. The village is wrapped around the mountains and located in the flat ground in the middle of them all."
"Are these mountains all rock mountains?" Lu Yongyi asked.
"Well, it's all Yan Mountain." Wu Tiezhu returned.
The mountain was steep, and they walked for nearly half an hour before reaching the cave. Everyone looked at it and said that the previous house was simple and crude. Comparing this cave, they found that the houses were still much better. A curtain was hanged at the entrance of the cave. The so-called curtain was actually nothing but a dilapidated bed sheet, which seemed to have been recently installed. They opened the curtain and walked in. There was only a stone bed in the cave and nothing else.
"Qingyao, do you really want to live here?" You Xingyu asked.
"Yeah." For Gong Qingyao, it's good here. The most important thing was that these rocks seemed to contain some energy.
"Since everyone has decided, let's prepare lunch." Yu Chuxue said, the mountain road was very difficult to walk, and some of the rocks were exposed. Once some water gets on the mountain, the mountain would be more slippery. She didn’t care how Gong Qingyao would be able to climb later.
When going up the mountain, Yu Chuxue was afraid of falling, and kept holding on to the weeds or protruding stones on the road, naturally she didn't notice the leisurely walking Gong Qingyao in front of her.
"Okay." They had been on the road for most of the day and only ate a little wild fruit. Everyone was really hungry when Yu Chuxue said that.
Wu Tiezhu knew the rules of this reality show, and said, "We have pots and condiments to provide."
"Thank you." You Xingyu and others said.
"Don’t be polite." Wu Tiezhu said.
Everyone found a place by the river at the foot of the mountain and began to build a stove. With the experience in the first recording, everyone was much more skilled this time. The villagers saw that they had no food, so they each found some food from their house and delivered it.
"Big brother, this is the egg laid by our chicken. It's delicious."
You Xingyu squatted down and took the egg, "Thank you."
"Sister, this is our own vegetable."
Yu Chuxue also took it, "Thank you kid."
After a while, there was a pile of ingredients in front of the six guests.
Everyone had to say, "It is enough, thank you."
Since the villagers provided a lot of ingredients, the five did not have to go to the wild to find food. Seeing this, Yu Chuxue said, "I have a suggestion. There are more ingredients here. Why don't we cook one dish each?"
"Okay." Guo Yuankai agreed immediately, otherwise the limelight would be taken away by those who can cook.
Others had no objection. Yu Chuxue first picked up a bunch of leeks, "Then I will choose this ingredient."
Yu Chuxue pinched the leeks and leek scapes, and said to the camera, "I tell you, oh, this Leek scapes are a good thing. They are the best when stir fried." 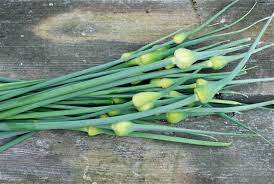 Leek scapes
After Yu Chuxue picked all the leeks, she cleaned them, and stir fried a large plate of leeks. Yu Chuxue held the plate and looked at You Xingyu, "Xingyu, what are you planning to do?"
You Xingyu didn't know how to cook, so he said, "I'm going to pass."
Yu Chuxue said, "Then I'll help you cook a dish." She picked up tomatoes and eggs. 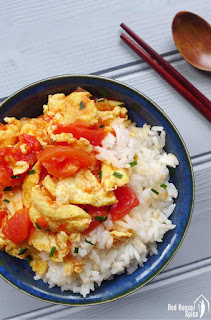 Tomato and eggs
Yu Chuxue poured a bowl of water in the pot, waited for the water to boil, put the tomatoes in the pot, "Look, turn the tomatoes around the pot with hot water like this, so you can easily peel them when you pick them up. Tomato skins have more pesticides, so the skins must be peeled off." This was what she learned before the reality show started, just to showed it during the live broadcast.
However, the onlooker villager kids said, "Our tomatoes never use pesticides."
A trace of embarrassment flashed across Yu Chuxue's face, and then she immediately said, "The tomatoes in Hongyan Village are naturally good. I just teach what the viewers should do."
But the viewers didn't buy it at all.
[Who needs you to teach?]
[Lololol, I am already peeling tomatoes since junior high school.]
[This kid is too sincere, it must be an embarrassment all over the body.]
...
After Yu Chuxue made the tomato scrambled eggs, Guo Yuankai took the pot and stir fried a plate of green vegetables, Lu Yongyi made a braised fish. 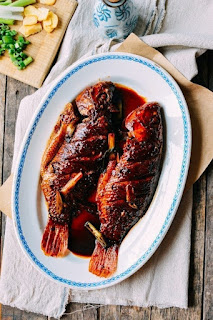 Braised Fish here
"Qingyao, what are you going to do?" Yu Chuxue asked, everyone had chosen the ingredients, but Gong Qingyao chose nothing. She wanted to see what Gong Qingyao could do.