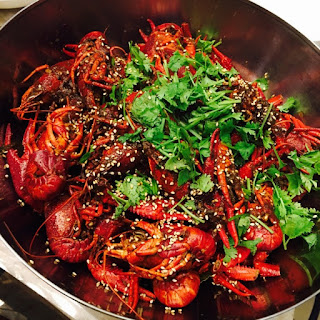 Liu Weiwei looked at Lieutenant Lu Qingheng, and instantly felt that the word SR was written on his face. Her beauty! There was also Thirteen Fragrant Crayfish, a summer favorite, a perfect match for cold beer, and a must-have snack for all couch potatoes. It was definitely more valuable in this world seven thousand years later.
Liu Weiwei immediately smiled into a flower, "Welcome, welcome, it's so hot, would you like a bowl of iced jelly?" 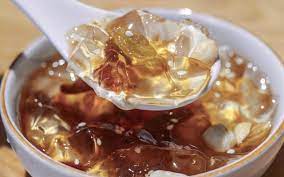 Lieutenant Lu Qingheng was still working hard to adjust his light brain, studying how to film his surrounding so that his First Army Regiment chat group. But, of course The Major was not in this group. Just after the video was connected, Lu Qingheng couldn't help being stunned when he heard the thin girl talking.
"Jelly?" What was that?
A trace of confusion flashed across Lu Qingheng's tanned handsome face. But soon a series of barrage flashed on his eyes.

[Corporal Fan Yuan: This, this, this is the Major's cooking soldier? His other half?]
[Prime Soldier Zuo An: No Way! The level 1 beast cat raised by my sister has thicker arms than her.]
[Sergeant Na Enli: It doesn't look good. The taste of the Major is so unique?]
Lu Qingheng felt that these people were really annoying, and the chats almost covered all his view, which seriously affected his all-round observation of the little girl. Well, besides her being a little thin, a little shriveled, a little pale, eyes a little dull, lips a little blue, limbs like firewood, there was nothing wrong with her. The point was that when he first arrived to the school, he already noticed her who looked particularly weak among the students. At that time, he felt she was a bit pitiful. It was beyond his expectation that his Major liked such weak chicken. 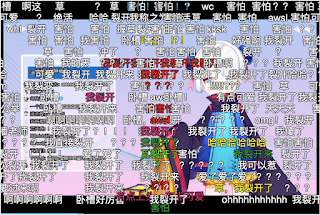 (TN: comments on live broadcast usually looks like this. It was often too much and the whole screen was pretty much covered.)
[First Lieutenant Lu Qingheng: Don't be noisy! Maybe there is something extraordinary about her that we don't know? All those who want to stay and see need to shut up, and those who don't all go to train! All your blabbering and nonsense covered my views, how can I see?]
Lu Qinghengquickly sent this message to the group chat. He turned around, but heard the girl's soft voice again.
"Do you like sweet-scented osmanthus? Do you like sweets?"
Lu Qingheng quickly turned around with a serious face, "Classmate, follow me on the driver-less tram immediately." Sweets did not exist in his vocabulary. He was such a tough guy, how could he admit this kind of thing in front of the whole group!
They got on the tram and took a seat in the back row. Lu Qingheng saw this weak chicken-like girl, checking out her space station, and then took out a transparent bowl.
"Hey, we haven't arrived at the training base yet, let's take a rest and eat a bowl of ice to escape the heat."
With the girl's gentle smile, the bowl that was filled with transparent shaking things was stuffed into Lu Qingheng's hand. A cold sensation swiftly rushed from his palm to his body!
Lu Qingheng bowed his head, and his light brain’s synchronized video also switched to the cold bowl in his palm. On the transparent shaking thing, there was a little golden color, as if it had been sprinkled with a layer of gold powder. Because of the movement of his palm, the contents of the bowl kept shaking, and there was a light floral fragrance pouring into the tip of his nose. Was this food?
The crowd in the chat group was also a little fascinated. Very different with the madness before, at this moment, only a few people had the courage to send a message.
[First Lieutenant Li Dazhou: This looks a bit like a solidified nutrient from a thousand years ago that I saw in history museum.]
[Second Lieutenant Sun Ao: Well, I also read about it in history textbooks.]
[Private Yan Ning: Watching silently, not speaking, and mourning a minute of silence for the lieutenant.]
Lu Qingheng’s hand was quickly stuffed with a small spoon.
"Eat, you are welcome." Liu Weiwei blinked harmlessly.
Lu Qingheng's temple twitched. Ruthless Major's only cooking soldier, could he even mess with her? No. Even if her didn’t want to eat it, he still had to. She might became his sister-in-law, how could he break the good relationship now?
With tears in his heart, Lu Qingheng could only meet the girl's expectant gaze. He closed his eyes, raised his hand, and stuffed the solidified nutrient solution that was said to be from former civilization into his mouth. When he was in school, he once read in books that the pre-civilization nutrient solution had gelatinous taste, monotonous, and difficult to chew. He subconsciously wanted to swallow it whole, but as soon as it entered his mouth, he opened his eyes wide!
The sticky colloidal taste did not appear, instead it was slippery, tender, and cold, accompanied by a faint floral scent. After a quick sip, it flowed into his throat smoothly! Lu Qingheng even clearly felt that the cool silky smoothness slid all the way from his mouth to his stomach. His whole person instantly became cold! (〃'▽'〃) It's... an indescribable feeling of coolness.
Lu Qingheng quickly took another spoonful, picked up the transparent solid QQ thing in the bowl, and sent it into his mouth. He couldn't help closing his eyes to thoroughly feel the icy refreshment that hit his body instantly. All his pores seemed to be filled with a hint of coldness. In this hot weather, he almost felt a fragrance of flowers. The breeze blew the coolness through every part of his body! Sweet, fragrant, tender, and cool!
Unconsciously, the spoon touched the bottom of the ice bowl. Lu Qingheng didn't even have any leftovers to eat!
[Corporal Fan Yuan: Why did I see an intoxicated expression on the lieutenant's face?]
[Private Yan Ning: Lieutenant Lu, it is impossible for you to lie to us about this ancient food. Nowadays, even hog pigs don't like this kind of food anymore.]
[First Lieutenant Li Dazhou: Haha, the acting is quite real.]
Lu Qingheng: There was no way for him to communicate with these vulgar guys!
Lu Qingheng gave a contemptuous middle finger to the camera, and a smile appeared on his tanned but not ugly face. "Classmate, this thing called jelly, is there more?"
Liu Weiwei laughed secretly, but glanced at the system and found the task was still in progress, there was no notification that the task was completed. She shook her head. "No more."
Lu Qingheng instantly felt that his vast training all this time was completely useless!
"But there are other foods I made, would you like to have some?" Liu Weiwei smiled.

Lu Qingheng stretched his neck instantly and swallowed fiercely.
Ten minutes later, when they arrived at the Beast Base, the atmosphere changed suddenly. There were no beasts, no bullets, no screaming or howling, only a girl, the lieutenant, a cooking table and a tablecloth.
"This is a crab small wonton, this is pork small wonton, and this is shrimp small wonton..."
The uncooked small wontons that Liu Weiwei made last time were all swept away by the girl in red before she had the chance to finish them. This time, she could finally cook them for diners in real life. Seeing that the current progress in conquering SR-class diner was only 25%, she knew that just a jelly couldn't make the lieutenant surrender. After all, the cool taste was somewhat close to the current nutrient solution in this era, which might surprise him for a while, but it was not enough to capture him. So she could only take out other food.
Lu Qingheng cautiously placed a level 6 resistance energy shield around them. Beasts above level 6 would not find their location by smell, and wouldn’t disturb his...dinner. He even turned the recording camera to the food served by the girl in a very unconventional manner.
The bowl was steaming, sprinkled with some chopped green leaves that were said to be green onions. The visual and fragrance from an unknown spice stimulated his taste buds, making him uncontrollably drooling. This thing called small wonton, each one was plump but petite. It was only the size of his thumb and he could swallow five or six in one bite. When he ate one spoonful small wontons, the rich and mellow taste exploded directly in his mouth!
With a bang, all kinds of chewy meat fillings, tender and soft skin, overflowing salty and fresh soup overlapped together in Lu Qingheng’s mouth. As if every ingredient was playing orchestra in his mouth, a symphony converged. This was haute cuisine!
This was definitely a dish that was destined to be unforgettable. It was completely different from those nutrient solutions sold on the market or developed by the military. Those nutrient solutions were like water with barely added taste. The things that exploded in his mouth just now were the real food.
Lu Qingheng ate three bowls fiercely, put his bowl down with a bang, and felt that his whole body was full of incredible power. The refreshing feeling of the jelly and the small wonton explosive taste, made his blood boil.
Lu Qingheng wiped the sweat from his forehead and let out a long, comfortable sigh. This was it. No wonder a cruel and cold man like his Major would fall to this weak girl. She literally had a pair of hands favored by God!
Lu Qingheng lifted the protective shield and signaled the girl to put away the cooking table. There was no abnormality on his tanned face at the moment. However, just when Liu Weiwei wanted to check the progress of the task, she heard him sigh with emotion, "No wonder the major called me to guide you."
Liu Weiwei: "Huh?"
"Hands like yours are not supposed to be used to fight against beasts at all."
"Don't worry. You should use my secret self-developed weapon, RS Drunken Rifle, to ensure that beasts below Level 5 will fall in front of you immediately. You just need to stand without moving."
As long as a student could knock down the beasts head-on and make it unable to get up within three minutes, it could be considered as a pass.
Liu Weiwei: ... The system was right, as long as she was beautiful enough, all the rest would gather eventually, hehe o(*￣︶￣*)o