The gorilla opened its mouth to roar, and a stench swept through Liu Weiwei, making her almost vomit. This baby wanted to cry, but baby had to hold back T-T
Liu Weiwei was so scared that she couldn't even move. She curled up in the cabin, unable to even raise her arms. But the cold and firm voice in the ear kept giving instructions.
"Stand up!"
"Lying down in front of a beast is equivalent to committing suicide. You are going to take the college entrance examination, not to die."
"Throw a missile! I have adjusted your location for the best attack distance."
However, it was useless to give command to a woman who was panicking and had lost her mind. It was like knowing that if girls lift up their slippers, they could blow a wicked roach with a clean slap, but there were girls who screamed and panic, they just didn't dare to move. Unfortunately, Liu Weiwei was such a girl. She just felt that she was going to faint and she succeeded gloriously.
...
Qin Mo hugged the girl who fell from the sky. Compared with the malnutrition data from the test cabin, the visual sense was more straightforward. When he lowered his head, he saw her sharp little face and two arms with very little flesh. It was as if she had never drunk a nutrient solution before. He had no doubt that he could break her little arm with one-tenth of his one hand strength.
Holding the girl in both hands, Qin Mo kept walking from the back field to a room few hundred meters away. His feet were calm and there was no trace of disorder in his breath. He didn't feel any weight in his arms at all. The girl was lighter than the latest thin and light anti-aircraft gun. When he walked into the room, he put the girl in his arms gently on the bed. The scary white face and closed eyes successfully made him feel even more guilty.
...
[Beep – it was detected that the blood sugar of the owner was too low, she lost consciousness for more than five minutes and was kicked offline.]
[Preliminary diagnosis result: Seven weeks pregnancy, weak physique. Owner need to go to a hospital, or use a physical examination device for a thorough examination later.]
When Liu Weiwei was unconscious, her light brain bracelet was ticking. But soon, the official reminders sent by the Skynet official were submerged by nearly a hundred other messages.
[Heaven Rewards the Diligent have sent you lemon-flavored vegetable and fruit nutrient solution, ten boxes of exchange coupons.]
[Heaven Rewards the Diligent sent you orange juice flavored vegetable and fruit nutrient solution, ten boxes of redemption coupons.]
[Heaven Rewards the Diligent have sent you a watermelon-flavored protein nutrient solution, ten boxes of redemption coupons.]
When Liu Weiwei finally regained consciousness, her head was dizzy, and when she glanced at her light brain roughly, she was completely stunned by this series of superimposed nutrient solution notifications. She scrolled through six screens full of messages, but she still hadn't seen the last one. Patients with severe obsessive-compulsive disorder like her had no choice but to set all the messages as read.

Qin Mo raised his eyebrows. Cute soldier? Did she have any misunderstandings about him?
[I am The Best at Scoring Zero: You gave me so much nutrient solution, which is of great value, and I can't accept it in vain. But for the time being, I can't raise so much money to repay it. As a thank you, I can only give you food that I personally cook. I hope you can enjoy it o(n_n)o]
Qin Mo looked and at the moment there was a silver basin lying quietly in his Skynet mailbox. This was quite similar to the pan he used to feed his dog, except that it had a lid. He couldn't help and let out a chuckle, his chest shaking.
"What? You have a fever today?" Hearing Qin Mo laugh, as if he had no bones and was leaning against the wall, the blond man stretched out a hand and touched Qin Mo forehead.
"You, a dead face, can laugh too?"
Qin Mo slapped the blond man hand and glanced coldly.
The blond man laughed, stretched his waist, and turned his face listlessly toward the blazing sunlight outside, "With a boring person like you, my prosperous beauty has been wiped out." His face facing the sun was clean and fair. His skin seemed to be transparent under the sun, without any pores visible to the naked eye. And those gleaming blue eyes and short shining golden hair were full of fascinating and dazzling light.
The blond man took out a mirror and stare at his face from side to side. It took him a long time to lift his thin lips in satisfaction, "After two days of rest, my prosperous beauty is almost restored." He clapped twice.
A cute and beautiful robot dressed in a white maid costume walked to the terrace. "Master."
"Ha, smart Momo, who do you say is the most beautiful and handsome man in the universe?"
"Of course it's Master."
"Hahaha... you really are a good baby of this young master!"
Qin Mo didn't even look at the idiot master and servant, but took out the dinner bowl that the little girl had mailed to him in Skynet. However, as soon as he took out the bowl, he raised his brows. His vigorous and resolute movements stiffened.
An unspeakable strong smell, with a stormy speed, instantly flooded the entire open terrace, slapped in the depths of his soul!
The beautiful blond man with dazzling handsome face that was still laughing a moment ago suddenly twisted. "What, what is this!"
"Oh! Momo, did you catch a beast again? Why did I smell the smell of wild goat!" 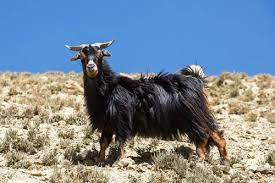 Qin Mo's stern mouth twitched. In order to thank him, she mailed a package of warm goat?