Liu Weiwei hummed, grilled chicken wings in the bedroom, and prepared the food ordered by the fat man. She found that the fresh air system in the dormitory was still very powerful. She went out to turn around and found that there was no smell of chicken coming from inside, so she didn't have to worry about revealing that she was cooking in the room.
The original owner was extremely introverted. Liu Weiwei had been here for several days, but no one had ever come to her to chat with her. She never even went to the classroom to study with her classmates. Of course, as the lowest ranked student of her batch, her shriveled figure plus a lot of debts, it would be strange if she had friends!
Liu Weiwei was pleased with the quietness. She was a little grateful for the original owner’s introverted attributes, allowing her to concentrate on the barbecue at the moment. She had grilled at least a thousand pairs of chicken wings in the training classroom of the food system, and finally mastered the ratio of marinating seasonings and the heat of barbecue perfectly. The time of a day in the system was equivalent to ten minutes outside. Just the simple process of grilling chicken wings, she had been trained in the system for a full week.
Liu Weiwei now dared to even close her eyes. With just one hand, she could feel the freshness of each chicken wing, the meat and fat content, and extrapolate the slight seasoning and fire temperature difference in the barbecue. A chicken wing could be grilled until the outer skin was crispy, but the juices inside were still full and delicious.
The fat man asked for a hundred pairs of chicken wings. Liu Weiwei placed an order in Skynet and ten minutes later, she received a parcel of broiler chicken wings in the dormitory’s mailbox. The assembly line was the same. She skewered ten chicken wings into each steel skewers, deeply massaged the chicken wings, and then grilled the chicken wings with seasonings. She hardly needed to think as her body could move to the next step naturally, and her movements were even smoother and more perfect than when she first went to Skynet.
[Second novice task has been completed! The learning proficiency of Ten Snacks reaches 100%, and the cumulative profit is 110,020 credits.]
[The host get a 5% bonus to the cooking skill of the snack department and the spice exchange function is activated. Due to the over-fulfillment of the task, a gift package will be given. Collect the gift in Backpack Bar]
Liu Weiwei heard the system prompt, and she couldn't help but stop when she was about to put a plate into the incubator. Was this system task update delayed? She received the money early in the morning.
[Only after the cooking is completed and the payment is collected, the profit amount will be updated.]
"Ah, that's the case. You're pretty strict." Liu Weiwei rolled her eyes and complained.
[Novice task is over.]
[The food master task is officially opened, and the host's system will be updated.]
Liu Weiwei: "..."
A character panel quickly bounced out.
[Host: Liu Weiwei
Age: 18
The recipe is currently open: 1% of street food.
Knife worker: lv0
Turn the pot: lv0
Seasoning: lv1
Heat: lv1
Pastry: lv1
Beauty: 0 (This item will directly affect the host’s lucky value, diners’ attraction, and repurchase rate. When high beauty is reached, special events may be triggered, such as becoming a woman next to the president and directly dominating food with a culinary lv0 circle. Complete the ultimate task in an instant!)]

￣へ￣
Liu Weiwei felt that this system was a fool. She conquered the food world with her beauty. Did it sound reasonable? Moreover, why was her beauty 0? How was the calculation, she was not convinced! After eating chicken for so many days, she obviously looked a lot more pleasing to the eyes.
"Forget it. I can't communicate about beauty with electronic products that don't have aesthetics." Liu Weiwei touched her still rough skin heartily. She studied the newly updated food system’s new information, and soon discovered that there was a back link on the information. After clicking back, there was a horizontal row of buttons.
Personal Information, Task Progress, Unlocked Recipes, Backpack Bar, and Exchange Mall.
The personal information was the panel she just jumped out of.
After each basic culinary skill, there was still experience required to upgrade. For example, Liu Weiwei had made several pastry based snacks, so now she was in the middle of lv1. She still needed 9999 experience to upgrade.
After she clicked in on Beauty, Liu Weiwei found that her personal 3D image magically appeared. From facial features to the full body without beauty effect, o(╯□╰)o
Just a few more clicks, the eyebrows, eyes, lips, etc, the subdivided beauty index was all 0! She was so angry that she could fly!
[Host, you are malnourished now, and you are also a minor. After working hard, there is still hope that the beauty index can be enhanced, so don't be discouraged!]
"Discouraged..." You !*&#)(!&
Liu Weiwei was so angry that she wanted to punch the wall with her fist. She sighed deeply before she remembered the newly acquired spice exchange system. At first glance, she almost vomited blood. 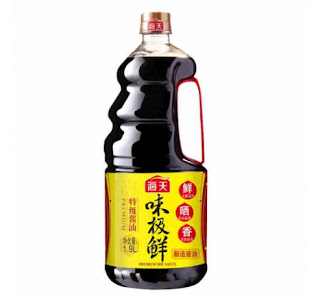 Weijixian Soy Sauce
The price was so high that it was going to ascend to heaven.
[After the host's basic cooking skills have broken through lv5, the homemade spice function can be unlocked. Please work harder.]
[The spice exchange price given by the system is equivalent to a 50% discount on the Interstellar Alliance open market, and all seasoning is of top level, far exceeding what the host can purchase from the open market.]
Liu Weiwei swallowed her saliva and reluctantly opened the second window on the light brain to check the prices of seasonings she just purchased online. At first glance, it's almost twice the price on the system. It was ridiculously expensive. What's even more cheating was that many planets showed limited stocks. To purchase from the other planets, the shipping cost was almost equivalent to the item price _(:_」∠)_
Hopeless!
No wonder the fat man gave her one hundred thousand credits. It turned out that he didn't give too much. The spices and ingredients needed for cooking were very expensive that they were priceless. Sh*t!
"Wait, it seems that I just got a big gift package reward? Is it spices?"
Liu Weiwei's eyes glowed suddenly and looked towards the backpack bar. Sure enough, a big gift bag was placed inside. She took a deep breath and snapped it apart!
[Breast enhancement attribute points: +10]
"Puff!!"
Liu Weiwei's hand that wanted to blast the system trembled instantly.

[If your breasts become bigger, your beauty will slightly increased.]
"What?"
Liu Weiwei's gaze couldn't help but looked dowm tremblingly, she stretched out her hand, felt it, and squeezed it.
⊙▽⊙!
What an amazing food system!
...
Liu Weiwei made the fat man's order and stuffed it in the incubator. Then she spent a long time studying her...chest. Well, it's big, it's big, it is big, right? No silicon, pure natural style. The corners of her mouth couldn't help but cocked. In this world, would there be women who refuse to become more beautiful? Oh, definitely didn't exist!
For two days in a row, Liu Weiwei checked the food system on her light brain almost every hour to see if any new tasks had been issued. Now she really hoped that there would be a hundred missions, so she could instantly brush up the beauty value to 100!
Liu Weiwei was circling in the dormitory excitedly, but was quickly stopped by an emergency notice from the school's academic affairs office.

[Students who applied for physical training should immediately gather in the school playground within an hour. It is out of date.]
Liu Weiwei originally wanted to give up physical skills exam, but now she had decided to get a mock physical skills exam pass and apply for the military academy's cooking department. She glanced at her light brain and found that the fat man hadn't responded yet, so she hurriedly cleaned up her bedroom, changed into a high-tech sanitary napkin that prevent leakage, and hurried to the playground.
When Liu Weiwei got to the playground, there was already a rush of people. There were many students applying for physical skills mock exam. Many people would apply for three or four mock exams at the same time in order to be admitted to a school in advance, hoping to choose the best in the end. So now basically the whole playground was occupied, and Liu Weiwei could only stand in the corner of the last few rows.
"What's the situation? Didn't the mock test take place right away? Why did they ask us to come over?"
"I don't know either."
"I'm studying in the nutrition cabin, luckily I didn't fall asleep."
Liu Weiwei listened for a while, and there was no effective information, so she began to wonder how to made money and improve her beauty.dBut soon, there was a humming sound of air rubbing above their heads.
Li Weiwei squinted, and when she looked up, she saw a pure silver plane burst through the air, turning over in a beautiful arc, and stopped above them. Under plenty of sunlight, the smooth lines of the wings seemed to be coated with golden light. In the noisy discussion, the cabin door opened, and three pairs of uniform military boots walked out firmly.
A tall man standing in the front, in an ink-colored military uniform, the six-pointed star in the center of his military hat smudged with a dazzling light they sprinkled his meticulously stiff and handsome face.
All the chaotic sounds on the playground were immediately extinguished. As the man took the steps, the noise was all shattered. But soon there was a gasp, and it sounded in the crowd below. The overwhelming shouts spread deafeningly from the ground to the air!
"Senior Qin!"
"Major Qin!"
"Wow, husband!"
Liu Weiwei was still admiring the man's perfect face, it was expressionless and admirable, but in the next second she was scared to fall by the screams around her.
And the principal's voice came as expected.
[Students, in order to encourage everyone to practice hard and meet the college entrance examination. Major of the First Army Regiment of the Star Alliance, Chief Qin Mo, the chief graduate of the First Military Academy of the Star Alliance, and the outstanding soldier of the Army, come to our school for a period of three days to coach everyone’s training.]
[Thank you, Chief Qin Mo, and our great soldiers for caring about the teachers and students of our school, everyone applauds!]
Tide-like applause mixed with screams, suddenly flooded Liu Weiwei's hearing. She watched with her own eyes the three-dimensional men who looked like a sculpture, with sturdy lines, walked towards them step by step along the descending steps of the spacecraft. The major's black eyes, sharp like a falcon, swept toward the boiling crowd, and pierced the thin girl who was shrinking in the corner. The eyes of the two met and collided at the distance of 100 meters!
Liu Weiwei squinted. Not bad. Just like on the forum, this person had many fans.
The major looked down. Well, just like on Skynet, weak and poorly handicapped. He could crush her bones with one finger.