The Master of Metaphysics is The Movie Queen – Chapter 7

In the early morning of the next day, Gong Qingyao got up and meditated. The spiritual energy in City R was thinner than that in City S. Probably because there were more people here, Gong Qingyao absorbed the surrounding energy before going to the bathroom to clean up.
Outside, the cameraman opened the door and whispered, "Let's see what Gong Qingyao is doing. I guess she's still sleeping." While talking, he crept to the bed.
There was a light in the room, and the cameraman thought Gong Qingyao turned it on deliberately. Although the production team didn't have a lot of money, this set of filming equipment was good. Even if the light was not good, it could still capture pretty decent video.
So the cameraman thought Gong Qingyao was still on the bed, and when he took a closer look, he found that the bed was clean and empty.
Even if the cameraman came in very lightly, Gong Qingyao heard him, and Lu Qianqian was chatting beside her.
Gong Qingyao came out of the bathroom after washing her face. The day was not yet bright outside. It seemed that the reality show had already begun recording. However, facing the camera, Gong Qingyao was a little uncomfortable. She gave the person entering the room a faint glance. She put the prepared bag on her back and asked, "Should we go?"
The cameraman was shocked, this was different from what he expected, "Yes, yes."
Yu Chuxue had washed and dressed before the cameraman came. While Zhong Xinyi put on makeup before the cameraman came and lied on the bed again. After the cameraman came, she pretended to get up. As for the three men, they all got up and dressed neatly after the cameraman came and went downstairs.
Gong Qingyao was the first to get into the vehicle downstairs. The production team prepared a bus and sent the six of them to the recording venue today. After about half an hour or so, the other five people also arrived in the bus one by one.

Mao Liqiang sat in the front row. After the car drove, Mao Liqiang faced the camera and said, "Dear friends who are watching our live program, hello, welcome to our outdoor survival program. Today we have invited six guests. Let me start simple introduction. First of all, our super-popular guest, You Xingyu!"
There was a round of applause in the bus, and You Xingyu waved to the camera, "Hello everyone, I am You Xingyu."
This live broadcast has a total of seven cameramen. One cameraman for each guest, and one  by the host. That was to say, the live platform has a total of seven windows, the largest window in the middle was broadcasting the video recorded by this host, and the remaining six smaller windows correspond to the other six people. The host mainly recorded six people together.
The live broadcast started early. There were about 5,000 people who have entered the live broadcast room. Because of the backing of the sponsor, the production team had also done publicity on Weibo. Because it cost a lot of money to buy equipment, the funds used for promotion were limited. To put it bluntly, the promotion was very weak. Most of the five thousand people who had came in were fans of You Xingyu.
[Xingyu, love you!]
[The front row confessed to my family Xingyu.]
[I woke up so early, it hurts.]
...
The comments on the live broadcast had been coming one after another, and Mao Liqiang went on with the introduction, "The next one is our super beautiful and super sweet Yu Chuxue."
Yu Chuxue smiled sweetly at the camera, "Hello everyone, I'm Yu Chuxue, you can call me Chuxue or Xiaoxue, I hope you who watch the live broadcast can support me."
Mao Liqiang in turn introduced the other three people, and finally looked at Gong Qingyao, "Finally, we welcome the last guest, Gong Qingyao." Gong Qingyao waved to the camera with a cold voice, "Hello everyone, I am Gong Qingyao." 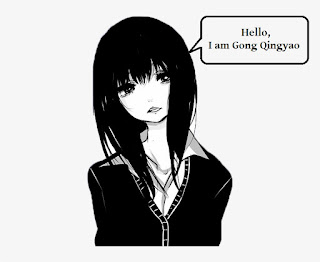 After Ai Xiaoyun sat in this car, when she heard Gong Qingyao introducing herself, she couldn't help but shook her head. The introduction was too simple. In this case, she should show her face in front of the camera like Yu Chuxue so she could leave an impression to the netizens.