The Master of Metaphysics is The Movie Queen – Chapter 2

Gong Qingyao walked in the mountain for a while, and then she knew the direction to go down the mountain. After eating the mutton, she walked all the way to the foot of the mountain.
When the little girl fell into the lake, the bag she was carrying also fell into the lake. Only then did Gong Qingyao have time to open the bag. The bag was made of leather, so even after the outside was dry, there was still water inside.
Gong Qingyao poured out the water in the bag, and began to look at the contents of the bag. There was a rectangular object. According to the little girl, this was a mobile phone. Gong Qingyao pressed it and it didn't respond, so she stuffed it back into the bag. In addition to the mobile phone, there was also a rectangular card. This was the key to the hotel where the little girl stayed. Gong Qingyao glanced at the words written on the card. After a while, she finally recognized it. It was written Holiday Hotel.
Unexpectedly, as the world changes, even the characters were also changing. It seemed that she was a little illiterate now. Gong Qingyao shook her head, and finally she found some red papers. The little girl said it was silver, now called money. The lake water has wetted them, and she looked at the patterns and words printed on them. They weren't blurred, so it shouldn't affect their use.
Apart from that, there was nothing else in the bag, Gong Qingyao stuffed the money into the bag and decided to go back to the Holiday Hotel first. As for how to go, she could only ask the passer-by. After walking for a while, there was no one, but she saw a big silver box moving next to her. She used to travel by carriages, but now the objects in this box could move. Really novel. Gong Qingyao stared at this "box" intently.
The window of the driver's seat of the van opened, revealing a middle-aged man, who asked with a simple smile, "Little girl, where are you going?"
If ordinary people saw this middle-aged man, they would think he was an honest person. But for Gong Qingyao, this person was full of filthy air, so he must have done a lot of detrimental things.
Gong Qingyao wanted to refuse, but she saw a middle-aged woman sitting in the back row. This was not the point. The point was that the child the woman was holding in her arms, the woman’s children’s palace was sunken, which meant that she had no children.
Seeing Gong Qingyao did not speak, the middle-aged man said, "Look, it’s already dark. This section of the road is particularly difficult to search for taxi. Don’t worry, we all came from the country going to the city. If you are going to the same direction we will take you by the way and don't charge you money." After speaking, he gave the middle-aged woman in the back row a look.
The woman hurriedly opened the back door of the car, "Little girl, come up, we both came to the city with our baby to join our relatives. If you don't dislike this car, you can take a short ride with us."
After seeing the woman's face, Gong Qingyao already planned to get in the car, but she would not open the door. But now, the middle-aged woman opened the door directly, so she quickly got into the car. Seeing Gong Qingyao getting in the car, the middle-aged man quickly got out of the car and closed the back door. He exchanged glances with the woman, and then returned to his seat.
Gong Qingyao looked inside the car curiously. She didn’t expect to be able to ride in a box, which was this car. This car was driven just by holding something circular. After seeing the structure of the car, Gong Qingyao looked out the window again. The official road in her time was not as good as this time flat and open road, and the speed of this car was also much faster than a horse-drawn carriage.
The middle-aged man saw Gong Qingyao sitting in the back row looking at everything, and he felt happier. He guessed that he might have found a girl who would not make trouble. She probably came from the village and had never seen a big city, although the city of S was not the capital. It was still a big city.
A lot of cars were parked at the intersection of S city. The middle-aged man looked out, his expression showing a trace of panic, but then he calmed down and parked the car.

Seeing this, Gong Qingyao in the back row asked, "What happened?"
The middle-aged man only said, "There is a police check in front. Don't worry, we can leave in a while."
Gong Qingyao was a little puzzled. "What is police?"
Someone still didn’t know what the police are these days? The middle-aged man saw that Gong Qingyao's expression didn't seem to be fake. He guessed that Gong Qingyao might have a problem with her brain, so he explained, "The police catch bad guys."
Gong Qingyao nodded. It turned out to be the same as a bailiff (TN: 捕快 = bailiff responsible for catching criminals in Imperial China). As there was a police here Gong Qingyao opened the car door and walked down. 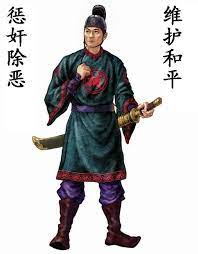 Bailiff in Ancient China
The middle-aged woman immediately whispered, "She got out of the car."
The middle-aged man didn't seem to be worried at all. The girl didn't even know what the police were just now, what else could happen, "It's okay, just pay attention."
After Gong Qingyao got out of the car, she saw several men dressed in the same clothes, and she knew it was the policemen the middle-aged man was talking about.
Gong Qingyao walked to the side of a young man and said, "There is a kidnapper in that car." There were quite a few police officers checking here. The one selected by Gong Qingyao was the one with the strongest righteousness.
Sure enough, when the young policeman heard this, his face was serious, "You are referring to the silver van?"
Gong Qingyao nodded, "Yes"

After arriving at the police station, Gong Qingyao followed the police into a room. Gong Qingyao didn't even blink her eyes on the office items inside. Hearing their conversations, she could tell that this was called a computer and that was called a telephone. Gong Qingyao silently remembered all this.
"Please come here and sit down with us to take the transcript." the young policeman said.
Gong Qingyao regained her gaze and followed the police to an office. In less than ten minutes, the transcript was completed. The young policeman was about to send Gong Qingyao away when another policeman came over and said, "Cheng Lei, the two people you caught today, the child is really not theirs, the child said he was picked up from Houshan today."
Cheng Lei, the young policeman Gong Qingyao asked for help, heard this, and he looked at Gong Qingyao. "It was this young girl who reported, or else we wouldn’t know that they were traffickers." Cheng Lei was telling the truth, who made the middle-aged man look like an honest person.
The policeman on the side said, "They only acknowledge that the child is not theirs, they do not admit that they are traffickers. They say that the baby is left outside without supervision, so they took it away. They want to raise her by themselves." The old couple was very old and had no children, presumably want to raise a baby.
Gong Qingyao heard this, and then said, "He lied."
The two policemen react quickly to what Gong Qingyao said, Cheng Lei asked, "Do you have any proof?"
Gong Qingyao said, "These two people’s eyes are so muddy so they must have abducted more than one child." (TN: Qingyao used the word (监察官 / jiānchá guān). This word was used in physiognomy to refer to eyes.)
Cheng Lei: "???"
What the hell is jiānchá guān? He almost believed what the little girl said so righteously.
The policeman next to him chuckles and laughs, "Little girl, you can't talk nonsense about things without evidence. We police must pay attention to evidence when handling cases."
"I never tell falsehood." Gong Qingyao said.
Cheng Lei had a good impression of Gong Qingyao, "Okay, but if we want to convict them, we have to find enough evidence, or get him to personally admit to doing these bad things."
Gong Qingyao was clear, "Okay."
Cheng Lei: "???"
What okay?
The policeman on the side wondered, "Do you have evidence, or can you get them to admit?"
"En." Gong Qingyao looked at Cheng Lei, "Take me."
The two policemen took Gong Qingyao to the interrogation room where the middle-aged man and woman were being interrogated. When the police interrogators saw Cheng Lei leading a young girl over, they looked suspicious. Even Cheng Lei thought he was crazy. He actually believed that the young girl in front of him would have a way to make the criminals confessed in front of them.
Gong Qingyao sighed silently. Unexpectedly, at the same time that the world has changed, people in this era no longer trust metaphysics. If it were in the past, whatever she said, the bailiffs would have taken action long ago. Gong Qingyao did not understand this degeneration, but this was not the key right now, the key now was the two people sitting at front.
The middle-aged man's name was Zhou He, and the woman's name was Liu Mei. When they saw Gong Qingyao coming in, they immediately said loudly, "You girl, we didn't kidnap you, we just kindly gave you a ride, you can't..."
Before he finished speaking, Zhou He stopped, and then there was a shocking scene.