The Master of Metaphysics is The Movie Queen – Chapter 15

The place where the press conference was held was in the center of the Capital, and the time was set at nine o'clock. Gong Qingyao got up and practiced for a while before going to the press conference.
Since knowing that Gong Qingyao came from ancient times, Lu Qianqian got up with Gong Qingyao and taught her how to take the subway and buses. She was worried that Gong Qingyao wouldn’t be able to go to the city center. Not to mention a waste of money, it would be easy to get hit by cars  in the middle of the road.
When Gong Qingyao arrived at the location, You Xingyu and others had already arrived. Yu Chuxue and Zhong Xinyi both put on their makeup, and they were a little surprised to see Gong Qingyao came in without makeup.
"Why don't you wear makeup?" Yu Chuxue asked.
"Not used to it." Gong Qingyao replied.
This answer was strange for Yu Chuxue to believe. When she met her before, Gong Qingyao used heavy makeup.
Ai Xiaoyun came from the studio, saw Gong Qingyao without makeup, and asked the same question, Gong Qingyao repeated the same answer again.
Gong Qingyao had indeed changed a lot in these days. Before, she used to wear heavy makeup. Although she looked more pleasing to the was too late, Ai Xiaoyun sighed and didn't say much.
The backstage staff shouted, "The reporters are here, please prepare the guests to come on stage."
Gong Qingyao was the last to go up the stage. Sitting in the middle of the stage were Mao Liqiang and You Xingyu, and then Yu Chuxue and Guo Yuankai on their left, Zhong Xinyi and Lu Yongyi on their right, and Gong Qingyao on the far right of the stage.
Last night, the official media of S City and R City successively issued relevant explanations on the Ye Mountain incident. The fact that Ye Mountain was a place where human traffickers live has caused an uproar and caused a lot of noise, so the reporters also wanted to ask the parties involved.
As soon as everyone was seated, a reporter asked the first question, "Before shooting, do you know about this?"
This question was answered by Mao Liqiang, "Before we start recording, the crews would survey the places we were going to. Ye Mountain is very beautiful. I believe you have also seen pictures about Ye Mountain on the Internet. Many sketches will be taken in Ye Mountain. I believe it is not only us, even everyone here, and the general public have never thought that Ye Mountain would be a gathering place for human traffickers."
Another reporter asked, "At the end of the live broadcast, I heard Ma Sun say that you have discovered their secret. What is this secret?"
You Xingyu picked up the microphone, "The secret is that they are traffickers."
The reporter continued to ask, "How did you find out?"
This question made everyone a little embarrassed. After all, it was Gong Qingyao who discovered the secret, but how did Gong Qingyao discover it? Everyone silently cast their eyes on Gong Qingyao.
Gong Qingyao said, "The person they kidnapped said." After speaking, Gong Qingyao felt that her wording was wrong. Liu Xi was a ghost not a person.
Another reporter asked, "After the live broadcast was interrupted, did you fight the gangsters?"
Yu Chuxue finally felt that she had a chance to speak and couldn’t wait to pick up the microphone, "After the live broadcast was interrupted, the six of us and the staff fought against them strongly." After speaking, Yu Chuxue paused, and then said, "Probably It’s because we all hate human traffickers, so we beat that group very desperately." 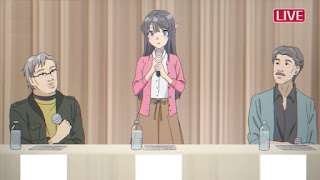 Lu Yongyi glanced at Yu Chuxue and lowered his head silently. He really didn't know how embarrassed he was to hear these words. The person who was so scared that she screamed again and again at that time was saying this now.
The show’s cameramen in the audience were even more ashamed. The villagers were too vicious. They didn't even protect their cameras, let alone beat the sturdy villagers.

The reporters asked while recording, "Will your reality show still going to be continued?"
The reporter who asked this question was invited by Mao Liqiang. In this press conference, Mao Liqiang invited a few acquainted reporters to let them ask questions related to the reality show in a timely manner.
Mao Liqiang replied, "We will continue to record, but our equipment has been damaged to varying degrees. Fortunately, we bought insurance and are currently claiming them. So the next reality show will definitely be recorded, but it will be a little later than the original schedule."
"It can be seen that the situation at that time was really fierce. Then I would like to ask if the six guests will continue to participate?"
You Xingyu first said, "If the postponed date does not conflict with my schedule, I will continue to participate."
Yu Chuxue went on to say, "I will definitely participate." After all, this was specially created for her by her gold master. The most important thing was that besides the reality show, she has no other schedule yet.
The remaining few people also said that they would participate.
Gong Qingyao originally didn't want to participate, but then she remembered the script she received prior. The second recording that was planned on a certain rural village, where the spiritual energy must be much better than that of the Capital, it was beneficial to practice Qi, so she nodded slightly and said that she would also participate.
Some reporters felt that the topic related to reality shows was not hot, so some reporters asked, "If you knew in advance that Ye Mountain was a den of human traffickers, would you shoot reality shows there?"
This question was a trap. If they said that they would shoot there, it was too fake. If they said they would not shoot there, it was a bit too cold-blooded.
Seeing that no one answered, Yu Chuxue said, "Of course we will. After all, although the traffickers are terrible, they didn't do anything to us. What's more, didn’t we beat them all together?"
Zhong Xinyi agreed with Yu Chuxue’s point of view, "In fact, apart from human traffickers, the scenery of Ye Mountain is beautiful. In this reality show, we encountered a lot of delicious things, such as fried lotus and boiled vegetable soup in bamboo. Anyway, I  feel that the Ye Mountain reality show this time is an experience that I will never forget in my life."
The reporters asked some other questions, and began interviewing the six guests one by one.
Probably it was found that Gong Qingyao talked too little, so someone asked, "May I ask Miss Gong Qingyao, I also watched your reality show this time. I saw that many you used peach pits to smash rabbits and bamboo spear to fish. It was so interesting, I want to verify, is this real or the design of the director team?"
Gong Qingyao said, "Real."
Mao Liqiang said immediately, "It's absolutely real, I swear."
"Netizens made the part of you stabbing the bamboo into an emoticon, which is very hot at the moment, how do you feel?"
Gong Qingyao didn't understand what emoticon was, "I don't feel anything."
The reporter simply changed his question. "Then, are you very good at surviving in the wild?"
Gong Qingyao thought about it for a while. She used to spend the night in the wild, it was not something she considered good at, "So so."
The reporter did not expect Gong Qingyao to be so humble, and someone immediately asked, "Then what are you good at?"
Ai Xiaoyun, who was sitting in the audience, felt a premonition. Sure enough, she heard Gong Qingyao's answered, "Fortune-telling."
Ai Xiaoyun slapped her forehead.

The audience was quiet. Did they hear that right, did Gong Qingyao say that she is good at fortune-telling? What age was this, and fortune-telling, even if she knew a little bit of metaphysics, she shouldn’t say it so aggressively, these reporters were obviously a little puzzled.

Gong Qingyao felt that what she was telling was the truth so she didn't explain too much. As for others, whether they believed it or not, she couldn't interfere.
In fact, the news about Ye Mountain had already climbed a lot of hot search list, but the reporters didn't expect that when the press conference was about to end, they would find another hot topic.
They quickly edited the news on their laptop, just to see who could post it first.
After answering the last question, Mao Liqiang announced, "This is the end of today's press conference."
Mao Liqiang ordered lunch at the hotel and invited everyone to leave after eating. Gong Qingyao agreed without words.
As soon as everyone walked out of the hall, they found a group of people. I was a group of people, but specifically dozens of people guarding one person in the middle. This formation was a bit big, so it immediately attracted everyone's attention.
Zhong Xinyi on the side exclaimed, "Qin Ze!"
At this moment, Qin Ze turned his head and found Gong Qingyao in the crowd at a glance. Although Gong Qingyao's heavy makeup was smudged that day, a person's eyes would not change.
Ordinarily, he would thank Gong Qingyao, after all, she helped him find his brother, but he had something to deal with at this time, so he nodded slightly in the direction of Gong Qingyao, and then left.
Qin Ze nodded, and the surrounding people's psychology instantly changed. That was Qin Ze! He nodded in their direction just now, and where he looked over, only Zhong Xinyi and Gong Qingyao were in that direction.
Everyone was speculating for a while. Just now they heard Zhong Xinyi calling Qin Ze, and Qin Ze nodded in response, indicating that this nod must be for Zhong Xinyi!
Even Zhong Xinyi herself didn't expect this. She called Qin Ze just now because she was a little excited to see him here.
Yu Chuxue was very surprised, "Xinyi, you actually know Qin Ze!"
Zhong Xinyi nodded and shook her head.
Guo Yuankai joked, "I said, Xinyi, you nod and then shake your head, what do you mean?"
Zhong Xinyi replied, "I once saw him at a party and chatted with him a few words, but I don't know if he remembers me."
Yu Chuxue said immediately, "Of course he remembers, otherwise how come he nodded at you just now?"
Zhong Xinyi nodded with embarrassment.
Gong Qingyao on the side naturally wouldn't think that Qin Ze was saying hello to herself. After all, when she saw Qin Ze, her makeup was really scary. She didn't believe that Qin Ze could recognize her.
"Let's go. Let's go have a meal." Mao Liqiang glanced at Zhong Xinyi more when he said this.
Zhong Xinyi had the most pleasant meal this lunch. Everyone’s attitude towards her changed a little bit. This was the first time since the reality show started where she received the most attention. Even Mao Liqiang said a few words to her.
However, Zhong Xinyi hid the little joy in her heart. Qin Ze just nodded to her, and her status could be improved so much, if in the future ...
Gong Qingyao on the side didn't care about Zhong Xinyi's oblique mentality. She left first after eating.
When Yu Chuxue saw Gong Qingyao leaving, she pulled Zhong Xinyi's arm and whispered, "Look at her, she must be a little upset because you have robbed her of the limelight."