The Master of Metaphysics is The Movie Queen – Chapter 8

It was because the chicken coop was too stinky. The chicken coop of this farmer has probably not been cleaned for a long time. Yu Chuxue smelled it and glanced at Zhong Xinyi. Zhong Xinyi probably did not expect that the production team would be so bad, she I really didn't want to catch a chicken from this place.
You Xingyu walked over to them, "What's the matter?"
Zhong Xinyi said silently, "It smells so bad."
You Xingyu looked at the chicken coop, and the host camera turned to follow.
The comment section of the live broadcast screen was also brushed up.
[6666666, this production team is real.] (TN: 666 / liùliùliù represent 溜溜溜 / liùliùliù meaning smooth/slick. This originated from Chinese gaming slang, where gamers would put '666' in the chat after seeing another showing an impressive skill)
[No way, I can smell it all across the screen.]
[I'll vomit for a while first.]
[Xingyu don't enter the chicken coop!]
…
When You Xingyu heard what the three in front said, he walked directly to the chicken coop, but these chickens wouldn’t be so easy to catch.
When a stranger came in, the chickens in the chicken coop immediately flew up. The chicken coop was originally filled with chicken feces and chicken feathers. When it flew, the feces and feathers were flying everywhere, and the smell became even greater.
Yu Chuxue and Zhong Xinyi screamed immediately, it was too difficult to catch a chicken.
Seeing that You Xingyu had gone in, Guo Yuankai could only clenched his lips and also walked into the chicken coop. However, these chickens saw too many people and ran faster. Lu Yongyi shook his head. How could it be possible to catch a chicken like this? He silently approached a chicken from the side.
Suddenly, in the middle of a chicken flying dog jumping scene, they saw Gong Qingyao stretched out her hand to grab a chicken flying on the air, "Got one."
Everyone didn't seem to know what happened, Zhong Xinyi said first, "Great, we finally caught the chicken."
Guo Yuankai was covered in chicken feathers and panted, "How did you catch it?"
"It came to my hand." Gong Qingyao said.
Everyone: ... I'm so angry, but I still have to smile.
In any case, it was good to be able to catch a chicken.
You Xingyu said, "We can't take other people's chickens for nothing, so let's clean up this chicken coop."
This should have been said by Yu Chuxue, but Yu Chuxue looked at the chicken coop and didn't want to say it. Guo Yuankai and Lu Yongyi immediately helped clean it. Yu Chuxue and Zhong Xinyi didn't even want to get into the chicken coop, so they ran to the side to fetch water.
After Gong Qingyao tied the chicken captured, she went back to the farmer's house and asked if she could pick some vegetables. The farmer's household consisted of three people, an old man, a middle-aged woman and a child.
The middle-aged woman said, "You can pick what you want."
In return, Gong Qingyao cleaned up all the weeds in the field. When You Xingyu and the others cleaned up the chicken coop, they found that Gong Qingyao even cleaned up the field. It seemed like Yu Chuxue and Zhong Xinyi was doing nothing.
When everyone was thinking this way, they saw Yu Chuxue and Zhong Xinyi coming over. Zhong Xinyi probably guessed what everyone was thinking and immediately explained, "I just went to the surrounding area with Chuxue to take a look. There is an abandoned cabin over there. Chuxue and I cleaned the cabin so that we can rest there later."
Yu Chuxue continued, "Yes, we can spend the night there."
You Xingyu was noncommittal, "Let's go get lunch ready."
"By the way, there was a lotus pond in the east, we can cook lunch there." Yu Chuxue said.
Everyone moved the ingredients to the lotus pond. The three men ran to the lotus pond and washed up. They washed their clothes and dried them on the boulder beside the pond. Guo Yuankai smelled his body, "This smell finally gone. Now, we can prepare lunch."

Soon several people discovered that there was no pot here, so they couldn’t cook.
Yu Chuxue said, "How about we borrow a pot from a farmer's house?"
Guo Yuankai said that this method was feasible.
You Xingyu said, "It don't have to be so troublesome, we can roast the chicken."
"What about the seasonings?" Yu Chuxue asked, feeling a little dissatisfied. She wanted to snuggle up with You Xingyu to hype CP. However, up to now, You Xingyu didn't care about her at all, and even always refuted her.
Yu Chuxue thought of Wei Mingyi again. At the beginning, the person said he wanted to raise her, but when she came here, she discovered that this reality show was a small production, and she was actually really unwilling. But at the moment she couldn't say anything. After all, this was a live broadcast. Although she didn't know how many viewers were watching the live broadcast, Yu Chuxue had to always ensure that she was in the best behavior when facing the camera.
Ai Xiaoyun, who was sitting in front of her mobile phone and was watching the live broadcast, looked at Yu Chuxue's performance, and a glimmer of praise flashed in her heart. Although there was a gold master behind Yu Chuxue, she had to say that Yu Chuxue herself still had a bit of ability. Ai Xiaoyun took another look at Gong Qingyao in another window, she didn't say a word on the recording today, but for some reason, Ai Xiaoyun felt that she would always turn her attention to her.
Unlike Ai Xiaoyun, Mao Liqiang always paid attention to the viewers of the live broadcast. From 5,000 in the morning to 20,000 at this moment, the data was much better than he expected. The comment section of the live broadcast has not disappeared, and it was quite big. Part of it was traffic brought by You Xingyu.
Many people have gotten up at this time, so the number of people watching the live broadcast was slowly increasing. Mao Liqiang believed that today's viewers would exceed 50,000!
On the other hand, Yu Chuxue and Zhong Xinyi went to borrow pots, but the pots of the farmers’ households were so big that no one wanted to borrow them, so in the end they only brought back some seasonings such as salt and vinegar. Lu Yongyi killed the chicken by the lotus pond, while Guo Yuankai went to the lotus pond picked some lotus leaves and washed the mud out. You Xingyu was busy building the stove.
There was a bamboo forest on the way to the lotus pond. After Gong Qingyao put the vegetables on the edge of the lotus pond, she went to the bamboo forest. The cameraman followed Gong Qingyao, and many comments were coming in again.
[I replayed the earlier live broadcast. This person is called Gong Qingyao, and I don't think she has said many words.]
[It's not that she didn't talk much, she hardly talked.]
[What do you say she is going to do?]
…
Gong Qingyao didn't know these comments, she walked into the bamboo forest, and with a ‘pop’, a bamboo was cut off by her bare hands.
Most people know that bamboo seems thin but full of toughness. People usually used a sickle to chop bamboo. It was impossible to break bamboo with bare hands like this.
If it wasn't because the bamboo breaks were not smooth, everyone would have thought the production team cut the bamboo in advance.
The viewers watched this scene and immediately commented [666666666]
The cameraman looked dumbfounded, this, this was too powerful.
After Gong Qingyao broke the bamboo, she looked for a sharper stone around, polished the stone back and forth, and then cut the bamboo into six parts.
The cameraman stared at everything in amazement. It usually took a long time to cut bamboo with stones, but the girl in front of him probably didn't even take five minutes.
After the bamboo was cut, Gong Qingyao split the bamboo horizontally, so that it became a bamboo that could hold things. After doing this, Gong Qingyao returned to the lotus pond.
Lu Yongyi have finished marinating the chicken and were wrapping the chicken with lotus leaves. Zhong Xinyi saw Gong Qingyao coming back and asked, "Qingyao, where did you go?"
Gong Qingyao shook the bamboo in her hand, then washed the bamboo in the lotus pond. Zhong Xinyi asked curiously, "Is this preparing bamboo tube rice?" 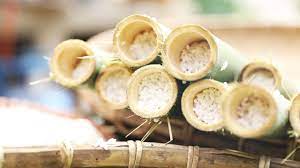 Guo Yuankai asked, "Bamboo rice, do we have rice?"
Zhong Xinyi immediately replied, "We can borrow."
Gong Qingyao poured water into the bamboo, "This one to cook the green vegetables." She then sprinkled some salt on the bamboo, and then put some green vegetables into it. 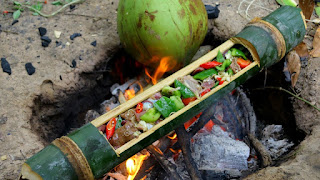 Zhong Xinyi nodded, "No wonder, ordinary bamboo for bamboo tube rice is opened from above, but this bamboo is opened from the side."
The three men have already buried the chickens. At this moment, everyone thought of another question, "We have no fire?"
Gong Qingyao picked up a branch, then found a wooden board, dig a small hole in the wooden board with the stone just now, and put some small wood chips on it.
Guo Yuankai on the side laughed, "I said Qingyao, do you still planning to learn from the ancient people to make fire by drilling wood? I tell you, this is not..."

The wood chips were burning before the two words were finished. The people at the scene were dumbfounded, and the viewers watching the live broadcast were also blown up.
[F*ck, am I dazzled?]
[Drilling wood to make fire?]
[My God, the fire is really rising.]
[Too 6666666, I just saw her take a branch and drill twice at random, and the fire started.]
[Give you all my knees, okay.] (TN: Giving knees meaning kneeling down usually to worship)
[I just click on the live broadcast. I didn't expect it to be quite interesting. I plan to continue watch it.]
…
Guo Yuankai looked at the growing fire, and suddenly felt a little pain in his face. (TN: Face in Chinese can represent dignity, so feeling pain in the face meaning being embarrassed here)
Yu Chuxue didn't expect Gong Qingyao to steal her limelight. She could only smile, and Zhong Xinyi immediately clapped her hands, "Qingyao, you are amazing."
Even You Xingyu nodded rarely, and for a while, there were cracks in Yu Chuxue's smile.
Gong Qingyao put the bamboo tubes into the fire one by one, covered them with bamboo lids, and then waited slowly.
"I'm looking forward to it," Zhong Xinyi said.
In fact, apart from Gong Qingyao, the other five seldom cook their own food in the wild. Looking at the things in the fire, they all followed Zhong Xinyi and looked forward to it. Taking advantage of this time, everyone chatted, even Lu Yongyi said a few more words.
Half an hour later, Gong Qingyao said, "It should be done."
As she said this, she set aside the burning wood above, and the men immediately began to dig the chicken below.
"Be careful." Yu Chuxue said.
"Okay." Guo Yuankai shaved out the chicken with a branch.
They cracked the mud with stones, and the lotus leaf that wrapped the chicken inside had turned dark green. The three men peeled off the lotus leaf, and there was a fragrance bursting out, which immediately aroused everyone's appetite. 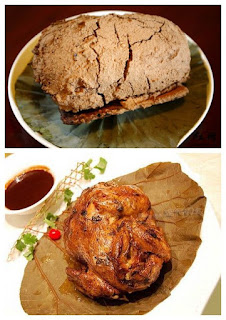