A few bubbles appeared on the calm lake, followed by ripples, and then the movement grew bigger and bigger, as if something was about to come out of the lake. Looking closer, it was actually a woman dressed in white.
Gong Qingyao (宫青爻, 爻 means the solid and broken lines of the eight trigrams) exhausted her last bit of strength to climb onto the shore, and then began to meditate with her legs crossed.
This body was too weak.
Yes, this body was not hers. Back then, when she fought with her enemy on the top of the mountain, she managed to defeat the enemy, but she was also hit and dropped to the bottom of the sea. The jade bracelet and magical objects she was wearing were all torn apart at that moment, and her meridian was completely broken. Her wisp of soul was sealed in the jade bracelet fragment and sank to the bottom of the sea.
After a long time, Gong Qingyao woke up, but ahe couldn't break the seal and remained in the fragment. Over the years, Gong Qingyao felt that her soul was about to dissipate. If she couldn't break the seal and couldn't find a suitable body, she would lose her soul, and disappeared forever from the Three Realms.
Unexpectedly, someone came across this jade bracelet fragment today and broke Gong Qingyao from the seal. The little girl who came across the fragments of the jade bracelet was also called Gong Qingyao (宫青瑶, 瑶 means precious), and the last word had the same pronunciation. The little girl was playing in the mountains, accidentally fell into the lake, and drowned, unintentionally lifting Gong Qingyao's seal.
When the little girl learned that her body could be used by the soul in the jade bracelet, she generously agreed. Before the little girl went to reincarnation, Gong Qingyao asked her what she wanted.
The little girl said that she hadn't won the title of movie queen in her life. Gong Qingyao promised her that she would help her win this award.
The happy little girl briefly explained the situation of herself and the entertainment circle to Gong Qingyao (宫青爻), but the time for her reincarnation came before she finished speaking, and Gong Qingyao (宫青瑶) had to go to reincarnation.
After climbing up to the shore, Gong Qingyao (宫青爻) regained some strength, and read the reincarnation scriptures to the original soul of her current body, wishing her to be reborn in a good family in the next life. But at the same time, Gong Qingyao also had some headaches. Originally, she didn't know what a movie queen was, but after the original soul gave some explanations, she knew that a movie queen was probably similar to an actor.
It's just that she was a metaphysical master, and it was really difficult to go into acting. Gong Qingyao intended to take one step at a time. As for the movie queen title, she must get it.
Thousands of years have passed since her time period, and the sea she was sealed in has also become a lake. What made Gong Qingyao sad was that the spiritual energy that was originally abundant between the heaven and the earth has become thinner. It was really not a good thing for metaphysical people.
Gong Qingyao sighed and was about to meditate, but she heard a sound of crying. She originally planned to ignore it, but the sound of crying got closer and closer to her. Gong Qingyao had to look up at the people coming.
One man and one woman, the man was in his early twenties, while women were at least half a decade old. Judging from their face, the two have no relationship with each other.
Gong Qingyao's eyes stopped the sobbing of the middle aged woman that was now screaming. She probably didn't expect to see other people here. Then the woman asked, "Do you saw a child passing by?" The woman asked and gestured with her hands. "It's about this high, wearing blue clothes and black pants."
"No." Gong Qingyao only saw the original owner today.
The woman cried again when she heard this, "My poor Yi'er, where are you?"
Gong Qingyao frowned slightly. She looked at the woman's face and the children's palace was abundant, which really meant that she had children and they were well now. But the youngest of her children was in the late teens, so didn’t match with the child she was looking for now, Gong Qingyao raised her head and asked, "What is your relationship with that child?" 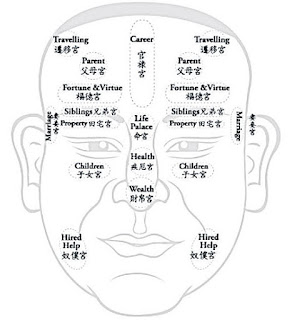 Palaces on a person face used in face reading.
The woman paused, although she didn't understand why the other party asked so, she replied. "I'm his babysitter."
Babysitter? Gong Qingyao was a little puzzled, obviously didn't understand what the word meant.
The man on the side said, "Xiao Yi is my younger brother. Did you hear any unusual voices just now?" This woman had obviously been here for a while, and maybe she heard some voices.
Gong Qingyao shook her head.
The man's eyes were dull, and he was about to speak again, but he heard Gong Qingyao say, "You have no younger brother, only one elder brother."
The man heard it, but his eyes showed a hint of sarcasm.
The woman on the side was surprised, "You, are you a master? So accurate"
Gong Qingyao nodded slightly, and the two people in front of her did not know what to say, and the atmosphere fell awkward for a while.
The man held up his hands and said, "Can the master help me calculate, where this child is now?"
She was a master, but Gong Qingyao didn't hear the man's respectful language, thinking that the child was probably lost and he was in panic, she let it be and said, "Eight characters*." (TN: birth date characters used in fortune-telling)
The woman was about to say, but the man first said a series of numbers.
Gong Qingyao stretched out her left hand. Even if now was a different time than where she lived previously, she can quickly calculate the year. Soon she looked up at the man and said, "The character is wrong."
The man was stunned, but the woman on the side said, "You are truly a master!" Then she reported a series of correct numbers.
If it were in the past, Gong Qingyao would probably not pay attention to these two people. But now that they were really anxious, so she stretched out her hand and pinched her fingers. The current situation of the child was not optimistic, so she hurriedly said, "Hurry to the southeast."
"Thank you!" The woman said immediately, and then looked at the man on her side.
Although he didn’t know how Gong Qingyao calculated it, it’s better to have a specific direction than just wandering around. Combined with Gong Qingyao’s tone just now, the man nodded slightly, "Thank you." He turned around after he said it. After he ran out, the middle-aged woman also left.
Gong Qingyao adjusted her sitting posture and continued to meditate. The spiritual energy here was thin, but Gong Qingyao was surprised to find that this body ability to refine spiritual energy was very fast, and between exhaling and inhaling, it absorbed the surrounding spiritual energies cleanly.
After dusk, Gong Qingyao opened her eyes again. Even though she was not an emotional, she still showed a hint of surprise in her eyes. She knew how to practice Qi*, but not at such a speed. Even if it were placed in the past, on the location with the most ample spiritual energy, it was impossible even for an extremely talented person to complete a breakthrough within half a day. (TN: *Qi = vital force, here)

If you enjoy my work, please consider sending this sleep deprived mtl-er some ko-fi. =)
Leave a review on Novelupdates
<< Synopsis | Next chapter >>