Liu Weiwei was startled by the fat man's yell. When she looked around, the crowds who had been attracted by the smell of her food suddenly disappeared. She wanted to choke this fat man!
Liu Weiwei had done market research a long time ago and knew that the chicken was sold very cheaply and was considered worthless. But she was not selling boiled chicken!
This fat man should know, because a large number of spice seeds were lost on the Great Escape, the cumin powder commonly used in barbecues was very expensive, it almost worth its weight in gold. This fat man, did he how many precious materials she used?
Cough, although the cumin powder Liu Weiwei used now was a gift from the cooking system, she would need to spend money next time she wanted to buy it from the system. More importantly, after investigating on the internet for a long time, she finally discovered that many of the dishes in her punishment system were not available now!
Just took the two new snacks she learned in the training room this time. The cooking methods and skills used for cooking them were superb and had never been seen by the general public. These things were rare and expensive, so such a price was not overpriced. This expensive cumin powder alone was worth that price.
"You are so shady!" The fat man was still there to make the final statement, with a look of disguise on his face, "You are shadier than this fat man, so ruthless!"
Liu Weiwei was speechless, it might be that her temper was really bad after being broken in love, so she didn't bother to explain to this fat man. Her phoenix eyes squinted, and she rolled the steaming savory crepes on the pan. She push it to the fat man, "Would you like to buy some?" If you didn't buy, get out!
The fat man quickly figured out in his mind that the pair of chicken wings was at least twenty times the price in the market, so was this crepe with an asking price of twenty actually worth one credit?
His fat face immediately became tangled, and his eyebrows were squeezed together. But-it was so fragrant!
He swallowed again with difficulty, sniffed hesitantly and clutched his aching chest. He finally slapped the twenty credits on the trading machine heavily, and said, "Give it to me!"
Liu Weiwei glanced calmly at the payment received, wrapped the hot cake and handed it to him, "You want grilled chicken wings also?"
The fat man hadn't accepted the crepes, and his eyebrows trembled again. "No! You are too shady! How can you earn money like this..."
Before he could finish speaking, he was deeply attracted by the thick egg scent coming from his hands. He didn't care whether it was hot or not, he took a big bite. At that moment, he was stunned. The moment his teeth touched the dough, it really seemed as if the whole world had changed color!
The golden wrapper was crispy, but he could still feel the delicate elasticity. The tender eggs and crispy cracker were stuffed inside. The soft and crisp texture made his tongue seems to melt away. At this moment, his whole mouth was completely surrounded by the fragrant sweet sauce, the refreshing green onion fragrance and the mellow egg fragrance.

Fatty's really squinted eyes this time. But his amazed expression only lasted for a short while, and he immediately gobbled up the crepes without breathing. So, so delicious! This smell made people want to cry!
He had the opportunity to taste real cooking dishes when he grew up, but he felt that the taste today was something he had never tasted before. Compared with this deliciousness, the fruit-flavored nutrient that he ate before was simply unpalatable. Moreover, this only cost twenty credits! Last time, his father hired a chef back, and stewed them a pot of boiled vegetables and sirloin, that cost him 200,000 credits in total!
God, such a delicious meal today was only twenty?
The fat man was dumbfounded and couldn't help raising his hands in front of his eyes. He turned his mind a little bit. He could earn five thousand credits a day by selling energy stones here. How many such delicious and hot crepes could he buy?
Every day he could eat until he felt full and wanted to vomit. The fat man instantly felt that he was about to cry happily again.
Liu Weiwei watched his face change several times. However, she ignored him, bent down, grabbed a handful of frosted chicken wings from the quick-freezer at her feet, and leisurely skewered them one by one. She didn't move fast, and actually looked a bit strange if seen closely, but there was an indescribable beauty between her movements, as if skewering meat in front of a fire was incredibly elegant. 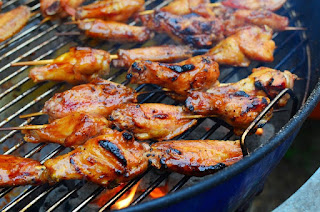 Gradually, the scent of cumin mixed with chicken filled the area.
The fat man had a big appetite, he swallowed the whole savory crepes in his stomach within a few bites, and he was licking his tongue with unsatisfied feeling. His squinted his eyes seeing Liu Weiwei started cooking chicken wings. He could not look away from her movements. The frosty and pale broiler wings, somehow looked a little different in those slender hands. He has eaten broiler chickens and also tasted one on Skynet because of curiosity. Until now, he couldn't forget the hard, chewy and tasteless meat. Food was tasteless, but it was a pity to discard it!
But now the rich fragrance lingering around the tip of his nose completely subverted his impression, and the scent was a hundred times stronger than the crepes just now. Just after he got a whiff of the scent, the saliva in his mouth was secreted unconsciously. This was chicken wings?
The fat man couldn't react for a long time. He stared at the chicken that was on the wire mesh, slowly turning golden and dripping with grease. He couldn't help but to get closer. Next to the table was the iconic ice pack of the Interstellar Warehouse that had just been taken out. That was the same broiler chicken that no one cared about!
The fat man took a deep breath, the pores all over him seemed to open up in an instant, and the thick fragrance penetrated his body. "This is eighty credits, give me one of that too!" The fat man yelled out these words while gritting his teeth.
As the sun gradually rose in the east, the light became more and more dazzling. It passed through the dense cypress trees on the side of the road, and projected warm tone on people.
On weekends, the third street in the East District also became lively and full of voices. The people on the road were basically in groups or pairs. They talked and laughed while browsing the street vendors or small shops on the side of the road from time to time. However, slowly some people's expressions became a little different. The tips of many people's noses began to move, and drools were secreted in their mouths. Several people even swallowed and stretched their necks to look around.
"Did you smell it?" Someone finally asked.
The person next to him hesitated for a moment, then nodded, "It smells good..." Halfway through, he swallowed again and touched his stomach unconsciously.
He just drank nutrient in the morning, but he seemed to feel hungry again.
"It seems to be from over there." Another person leaned in, closing his eyes and sniffing the air.
"Go, go and see!"

The most inconspicuous corner of this weekend market street, the cheapest stall, was always the least crowded. But today obviously everything had started to change.
When a few people stretched their necks and walked over quickly, the fat man sitting on the marble steps at the side finally sighed severely and looked down at the bare bones by his feet. The broiler chicken, which used to have no customers even if sold for only ten credits, was so delicious that he couldn't bear to throw the chicken bone. Who could believe this? If it was yesterday, he wouldn't even believe it. If time could go back, he would definitely remember to say four words to her, "I will buy all!"
Looking up at the line that stretched from the front of the stove to the corner of the street, the fat man's heart throbbed again. At a critical time, why did he struggle with such a small amount of money?
What a mistake!
The rich chicken scent remained on the tip of his nose, mixed with the unique spicy fragrance, reminded him the ecstasy of the first bite on the chicken. The moment the crispy skin was bitten open, the fragrant juice exploded from the inside out to the tip of his tongue, and the tender white chicken bounced in his mouth, followed by the unforgettable sweet and spicy taste. Soon after, there was also a little salty taste and overall freshness. Those memories almost made him swallow his tongue. Wiping his mouth, Fatty's throat surged again, and he was about to drool just by remembering. If he knew it, he should have thicken his face and stood still in front of the stove.
"Here, Auntie, the crepes you want are made with secret sweet sauce." Liu Weiwei secretly wiped the sweat from the tip of her nose with the back of her hand. Her other hand did not dare to slow down at all.
She really didn't expect this level of hawking. From the fat guy who was just attracted by the scent, and finally fell out of curiosity to try, to the second guest, the third guest. Soon, her stall became more and more crowded, and this remote corner couldn't contain it.
"Miss, I want one crepe, and then the chicken wings! Oh no, can I buy one chicken wing? I only need one!"
Liu Weiwei took the time to turn over the chicken wings skewers on the fire, smiled and nodded, "Yes, one forty credits."
Many customers were like this, and they really felt sorry for the money, so they just bought one to taste it first. But these people finished eating quickly, and then lined up again in silent annoyance.
The working class now had a daily salary of around three to five hundred credits. A pair of chicken wings cost 80 credits was still affordable for most people. Although ordinary chickens on Skynet only sold for ten credits, their dry and smelly smell were really not flattering. People rarely willing to spent money to buy it. Really delicious chicken had always been popular only in the circles of the aristocratic and wealthy. Ordinary people could only see this kind of food on Skynet's video or TV, but never had the opportunity to taste it. That's something that even money couldn't buy. But now, they could buy it for only 80 credits!
Everyone came out of the street with greasy mouths, their eyes shining brightly, and the corners of their mouths were filled with satisfied but unfulfilled smiles.