After Transmigrating, the Bosses Begged Me to Plant the Land – Chapter 64

Hi~
Thank you SuperRedNova for your coffee <3
1 extra chapter will be uploaded this afternoon.
Enjoy~
- MD
*****
They soon arrived on the last day of the second recording of the show.
Everyone got up early and found that they were a little reluctant to leave Xin Yuan Shan. Although it was work, they never knew work could be so happy. This morning, they didn’t see Shen Tingshuang. She left at five o’clock.
She didn’t ask the guests to help pick the fruit. After all, it would be much faster by herself. After picking the fruit, she cooked breakfast for everyone, egg rolls with fried potato shreds filling.
The method was very simple. She made simple flour slurry, added some eggs, then spread them into round cakes, put fried potato shreds and lettuce inside, roll up and eat. 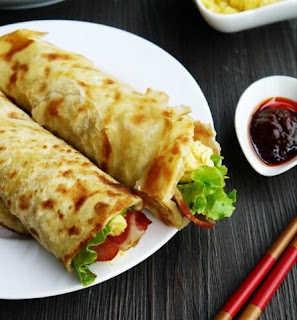 Egg Rolls here
Five people came downstairs and saw the hot breakfast, they sat together happily.
This morning potato shreds and yesterday’s baked potatoes have a different taste. It was different from yesterday’s chewiness because of the starch. Today, Shen Tingshuang used cold water to soak the starch out of the potato shreds, so it has a crunchy texture.  The sweetness of lettuce and the fragrance of egg wrapper could stimulate the whole body's satisfaction with one bite.
"I'm not used to thinking that today's show will end." Gu Yuan’s family conditions were very good. The chefs in the house were all top-notch, but perhaps because of the ingredients, she always felt that anything made by Shen Tingshuang was better than the ones at home. Even simple baked potatoes were better than those made at home.
Geng Chengyun was a little worried. This time on the show, he really ate without scruples. He would inevitably be scolded fiercely by his agent when he went back. He even thought, if he could, he would never leave. Shen Tingshuang still has some fruits and he thought about bringing some of them back for his agent. Thinking of this, he thought this method was feasible. When the show was over, he would go ask Shen Tingshuang.
Bai Hao was also a little uncomfortable, although this show has some abnormal tasks, but he was very happy to eat such delicious food, and these guests were very good, and he felt like chatting with friends in the field on vacation.
Liu Jing was also very calm now. The first recording of the program, she felt that she has the greatest position among the female guests. Everyone should focus on her. She admitted that she was a little arrogant, but she did not expect the audience to look at her and scold her. Fortunately, she was outdone by Shen Xuan. In the end, everyone’s artillery focused on Shen Xuan, so for this episode of recording, Liu Jing has tried to reduce her sense of existence. She thought she was a powerful actor, as long as there was no excessive incident in the show, she would just behave.
While chatting, Gu Yuan suddenly said: "Are there papers and pens?"She has a look of excitement.
If you were familiar with Gu Yuan, you would know that Gu Yuan songs and lyrics are written by herself. Why did she only release singles once a year or even no songs for several years? It was because she was not satisfied with the content she created.
There were papers and pens in the study, and Qin Yueze handed them directly to Gu Yuan. Gu Yuan took the pen and paper and started humming, drawing and writing on the paper. Everyone didn't bother her, and sat quietly aside.
[What's the situation?]
[The goddess seems to be writing a song?]
[Really? This song seems to have never been heard!]
[Ah ah, are we able to witness the birth of new songs?]
...
Xia Xia didn't know at first, but then Gu Yuan's agent called and asked the program team not to disturb Gu Yuan. Xia Xia only then realize.
At noon, Gu Yuan raised his head: "I will have a new song this year."
[F*ck?]
[Mom, my goose bumps are all up!]
[God, what kind of explosive news is this!]
[!! She was really writing a new song!]
...
Soon #Gu Yuan's new song# was trending on Weibo, and everyone found that Gu Yuan actually wrote a new song in the show.
Many people quickly clicked into the live broadcast room. This singer, who has equal popularity as Qin Yueze, exuded light at this moment.
Gu Yuan took the final score and began to sing a cappella. Gu Yuan's voice was really good, even if it was a cappella, it has an attractive magical power.
Although she ate chili these few days, Gu Yuan didn't feel any problem with her throat.
Shen Tingshuang's peppers were watered with spiritual energy, and of course it would not harm humans.
Gu Yuan was still singing, her eyes were clear, and her voice seemed to penetrate everything. The song, the lyrics, and the tone were really perfect.
Qin Yueze nodded slightly, he could see that this song would explode undoubtedly.
Shen Tingshuang also closed her eyes, hearing the ethereal voice of Gu Yuan.
...
Gu Yuan’s agent was sitting in front of the screen and burst into tears.
Just last year, Gu Yuan told him that she couldn’t write a song, nor could she sing it. Everyone thinks that Gu Yuan was unwilling to release too many singles. In fact, it was not. Gu Yuan just couldn’t compose any, and she didn't want to sing songs composed by others.
At that time, Gu Yuan didn't shed tears while saying this, but the agent knew that Gu Yuan was sadder than anyone else. He wanted to say that it didn't matter if she couldn’t compose, so many songs already released and each of them was a classic, but he couldn’t tell her this. He knew that Gu Yuan liked singing, so this composer block must be a big blow to her.
However, at this moment, Gu Yuan was singing a new song, the agent said while wiping his tears: "Yuan, you did it."
...
After singing a song, there were tears in Gu Yuan’s eyes. It’s great, she could write song again.
Geng Chengyun applauded vigorously: "It's so nice!"
Bai Hao: "Sister Yuan, when the album will be released, I must buy it!"
Liu Jing: "I really hate the program group. I can record it if I have a mobile phone."
Shen Tingshuang also said: "It's really good..."
Hearing everyone's praise, Gu Yuan: "Thank you for Tingshuang, you gave me inspiration."
Xin Yuan Shan was full of spiritual energy and it could inspire others, it was not surprising.

Shen Tingshuang took a sip, but still refused.
"But we already have enough milk." The person in charge asked puzzledly.
Shen Tingshuang explained the reason. This time their milk was indeed full of flavor, but they also put a lot of sugar. This would only destroy the nutritional content of the milk.
The person in charge returned to the company and let the R&D department continue to research. He didn't believe that he couldn't invite Shen Tingshuang to be their spokesperson.
As of today, Shen Tingshuang has 45 million followers, and they were all real fans. Finding such a person to endorse was the most helpful for sales promotion.
...
With 30 million servings of fruits and vegetables this time, many families have tasted Shen Tingshuang's produces.
[The second purchase, my mother heard that I spent a thousand yuan to buy a pound of finger oranges, and she almost beat me to death, but after eating, she only hated me for buying too little.]
[To be honest, after I grabbed the pepper, I was happy, but my wife scolded me for a while, as she didn’t manage to grap the fruit of Ah Shuang. I manage to grab but only bought pepper instead. We had a cold war for several days. Until the peppers arrived, I made a plate of tiger-skin green peppers. I took a bite, told her that it was not spicy, and persuaded her to eat it. As a result, my wife took a bite dubiously and she took the whole plate of peppers away! We don't have a cold war anymore now, but I don't have any more peppers.] 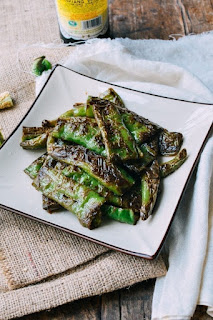 Tiger Skin Peppers here
[I would say, can’t I eat pineapple peels?]
[The kiwi fruit I bought hasn't arrived home yet, but the whole house hasn't stopped asking.]
...
In addition to these Weibo, many people also went to the Market Supervision Bureau official Weibo.
[Official, can it be analyzed? The fruits and vegetables from Ah Shuang who Farms, everyone said they are delicious.]
[I want to test the fruits and vegetables of Ah Shuang, every kind of fruit is so sweet, I suspect that it is sweetened.]
...
The official account of the Market Supervision Bureau quickly recorded the request of netizens. It just so happened that they were also looking for test items recently, so they chose Shen Tingshuang's fruit.
As a supervisory authority, they wanted to take samples very easily, so they went directly to Super Mall, and they quickly bought the fruits.
In fact, they only need to take a little bit, and after taking the sample, left the rest aside.
Soon the results came out. The tester found that the fruits of Ah Shuang who Farms had higher nutrient elements than other fruits of the same type.
For example, for apples, the protein content of ordinary apples was 0.2 grams, but the protein in Shen Tingshuang apples could reach 0.9 grams. Ordinary apple vitamin C was 4 mg but Shen Tingshuang’s has reached 1 g. The content of all nutrients were above the normal level.
They tested other fruits and found that they were all the same.
As for the harmful elements, they were not detected at all. After the test, several testers divided the remaining fruits. They were delicious and nutritious. Who wouldn't want to eat them?
The inspector happened to be one of Shen Tingshuang's fans, and she posted the test sample to the official account.
[Market Supervision Bureau: We really don’t understand how the nutrient content of this fruit is so high! Those who don’t want to watch the video directly watch the results. The fruits of Ah Shuang’s are not only delicious, but also high in nutrients.]
The official Weibo made the test into a video with a clear test report attached to it.  The Market Supervision Bureau was a state unit, and no netizen was unconvinced.
[Wow, the test results come out so soon?]
[Did the official accept the request?]
[Official clarification is the deadliest!]
[Ah, I bought Ah Shuang’s fruit before. My parents said it was so delicious. They thought it must have treated with some medicine. Now the official response proves that Ah Shuang’s fruit is very good!]
[Finally wait until the result, thank you government official, now I can rest assured to buy.]
[Yes, even if I know it’s good, I can’t buy it now. A certain treasure is sold out.]
[@Ministry of Agriculture, can you tell us why?]
…
This Weibo became a hot search and attracted the attention of the national agricultural department. They even appointed an expert to go to Xin Yuan Shan to request sampling.
Shen Tingshuang let them do as they please, but there was one requirement, that was not to damage the fruits and vegetables on the mountain.
These experts only took some soil and some fruits.  Soon, the inspection by the agricultural department found that Xin Yuan Shan's soil nutrients were also richer than ordinary soil.