After Transmigrating, the Bosses Begged Me to Plant the Land – Chapter 56

After returning, the old grandma quickly poured a glass of cold boiled water and took some more snacks: "Girl, drink some water and eat snacks first." The snacks in the village were crispy candies covered with sugar. Shen Tingshuang drank the water and ate another candy, which was really greasy.
Grandpa took out two thousand yuan and said embarrassingly: "Girl, we were supposed to give you four thousand yuan, but we don't have so much cash on hand. Let's take this two thousand first, and then we'll give the remaining two thousand for you later."
"No, just give me some vegetables." Shen Tingshuang won't take this money.
The old woman said: "That's not good, you deserve it."
Thanks to the ‘blessing’ of the system, Shen Tingshuang knows that money was very important to human, especially the elderly, so Shen Tingshuang definitely didn’t want this money.
Seeing Shen Tingshuang insisted, the two elderly gave Shen Tingshuang a lot of food. "This potato is really delicious, and there are also sweet potatoes." The old grandma also took out some bacon: "This bacon is also delicious. If it feels too salty, wash it with water before eating." There were also chickens and fish in the house, she also gave some.
The grandpa and grandma were honest people. They gave a lot of things, even some flour. "This is enough." The food in the big tartan bags they packed couldn’t be eaten for six people in three days. In the end, Shen Tingshuang only chose two big tartan bags to go back.
The grandpa and grandma originally came out to get Shen Tingshuang to take the other things, but they found that Shen Tingshuang ran very fast even when carrying those bags.
Even the cameraman couldn't keep up, let alone the two elderly people. The crews accompanying the filming were still thinking about whether to help Shen Tingshuang, but they saw Shen Tingshuang carried the things and ran. They couldn’t even keep up.
All the panting crews: "..." You were so fast, did the fans know?
...
Everyone returned to the house after a tiring day.
Shen Xuan rented a piano for 100 yuan, earned 30 yuan, and lost 70 yuan.
Liu Jing bought tools to do portraits such as sketching paper, pencils, erasers, and easel for 80 yuan, but in a day, she painted ten pictures for people, received 300 yuan, and earned 220 yuan.
Qin Yueze, Geng Chengyun and Bai Hao's team rented equipments for 150 yuan, received 1036 yuan, and earned 886 yuan.
Liu Jing said: "You were good."
Geng Chengyun: "In fact, I earned less, it was mainly earned by Brother Ze and Brother Hao." He could feel that when he sings, there were fewer audiences, but when Qin Yueze opened his mouth, even if only to say a few words, people were crowding all around.
Bai Hao also said: "I am the same as Chengyun, this was mainly due to Brother Ze's credit."
Nowadays there were very few people who carry cash, as their mobile phones have been confiscated, no one could set up QR code to pay, so many tourists didn’t manage to give money even if they wanted to.
Not only did Shen Xuan not make a profit, but she also suffered a bit. She originally wanted to be with Qin Yueze and the others, but Qin Yueze said that there were too many people in their group and asked Shen Xuan to find another position.
Liu Jing was in a good mood. Besides Qin Yueze, she should be the one who made the most money here: "Where is Tingshuang?"
Bai Hao guessed: "She is probably still farming."
As soon as his voice fell, Shen Tingshuang walked in from the door.  There were two big tartan bags in her hands, and they couldn't see what was inside.
Qin Yueze got up and walked to Shen Tingshuang: "I'll do it." He tried lifting the tartan bag and it turned out to be quite heavy.
Qin Yueze helped out, Bai Hao and Geng Chengyun couldn’t just sit there, so they quickly got up to help.
Shen Tingshuang was about to change her clothes, so she let the men took the bags, "Let's put them in the kitchen first."
Unexpectedly, Bai Hao and Geng Chengyun both raised the same bag but it didn’t move at all. Qin Yueze’s bag was lighter as it contained various vegetables, while Bai Hao and Geng Chengyun’s had potatoes, sweet potatoes, bacon, and chicken, so it were a little heavy.
Together, the two moved a few steps with difficulty.
Shen Tingshuang has only left a few steps when she saw that the two people, so she came back: "It's better for me to lift it."
Bai Hao: "It's okay, we can."
Shen Tingshuang took the tartan bag over and casually heading toward the kitchen.
In response to the doubtful glances of the others, Bai Hao and Geng Chengyun: "..."
It was not easy, why didn’t you try it?
...
Shen Tingshuang first went back upstairs to change clothes.
Bai Hao felt that he needed to restore his image: "Brother Ze, don't you think this is heavy?"
Qin Yueze: "Heavy." But Qin Yueze lifted the bag to the kitchen by himself just now.
After a while, Bai Hao definitely stopped struggling with this question.
Liu Jing said: "Do you know how to cook?"
Shen Xuan: "I'll make tomatoes and eggs." She bought tomatoes and eggs deliberately just to make this dish. It was simple and easy to make. She knew that there were many variety shows with cooking in it, after all, people relied on food. But as the daughter of a rich family she has never cook or even enter a kitchen before, so this scrambled eggs with tomatoes was deliberately learned before she came here. She has tried it several times at home.

Tomato and egg here
Bai Hao honestly said: "I never cook before, so I will just fry some vegetables."
Geng Chengyun: "Shredded pork with green pepper." 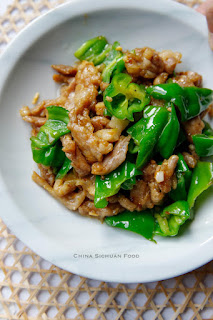 Pork with green pepper here
Liu Jing: "Then I will make a soup, how about Brother Ze?"
"Grilled eggplant." 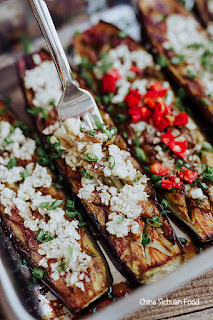 Grilled eggplant here
One person, one dish, soon they had four dishes and one soup.
As for Shen Tingshuang, Liu Jing said: "Tingshuang has been tired for so long, let her rest." Otherwise, the screen time would be dominated by her. After all, no one knew where Shen Tingshuang's two big bags of vegetables came from, but it must be an explosion.
"First, unpack these two bags of vegetables." Qin Yueze said.
Everyone agreed. As soon as the bag was opened, everyone regretted it. No wonder this bag was so heavy. One bag contained various vegetables and condiments, and the other bag contained potatoes and sweet potatoes.  There were also bacon and flour. Almost all the ingredients were in it.
Baihao suddenly wailed: "If we knew we would not buy vegetables and condiments in the afternoon. All this was wasted." After all, their total funds were only 1,000 yuan, and it cost close to 400 yuan just by going to the supermarket.

Liu Jing also feels distressed, thinking that as a big star, they feel distressed for such a small amount of money. This variety show was really ridiculous.
Geng Chengyun: "Brother Hao, it's normal that we couldn’t lift this before."
Bai Hao nodded, Shen Tingshuang was the abnormal one.
...
Shen Tingshuang took a shower and changed her clothes.
Everyone had finished cooking. Once she entered the living room, Liu Jing said, "Tingshuang, come and have dinner."
Originally, Liu Jing and Shen Xuan wanted to sit next to Qin Yueze.  But they didn’t want to be too obvious lest they got scolded by fans. So Geng Chengyun sat on Shen Xuan's left, and Bai Hao sat on Qin Yueze's right. Only Qin Yueze had a place to his left, Shen Tingshuang directly sat down there.
"You worked hard today, eat more!" Bai Hao said immediately, this two big bags of vegetables, how much money did it cost!
Shen Tingshuang glanced at the dishes on the table, except the eggplant that looked pretty good, and the soup next to it was decent, and the rest were a bit horrible.
Bai Hao made the dish first, but the greens were burnt.
Shen Xuan cleaned the pot only with water and didn't wash it carefully, so she couldn't scramble the eggs and tomatoes properly.
Geng Chengyun's shredded pork’s meat thickness was not uniform, so some of the fried pork was already crumbly while some were under cooked.
...
Shen Tingshuang tasted the eggplant, which was okay, but everyone felt that way, so the eggplant soon disappeared. Shen Tingshuang silently ate a bowl of white rice and drank a bowl of soup.
After a difficult meal, Liu Jing said: "Next time, Brother Hao, Chengyun and Xuanxuan will not cook."
Bai Hao was relieved: "No problem."
Shen Xuan wanted to explain, but she couldn't explain. The tomatoes turned black when they were in the pot. She panicked at the time, and then she fried a mess of things. She only knew this dish. She can't explain why she would make another sorry looking scrambled eggs with tomatoes.
Geng Chengyun also had no objection.
Liu Jing counted the funds: "We only have 1,357 yuan, but today we have brought so many ingredients, we should not worry about food in the future."
Tomorrow and the day after tomorrow, they didn’t have to run in fear of starving.
Qin Yueze nodded: "I have been here when I was filming. Tomorrow we can go to the Drum Tower."
"The local customs here are also good. Tomorrow we can also walk around the ancient town." Shen Xuan hurriedly said. When she came, she saw people dancing, and she was the only female guest who had learned to dance. At this time, she would definitely be able to attract fans if she danced on a song, and if Qin Yueze could follow her by then and dance together, it would be more perfect.
"I want to buy some souvenirs on the last day." Geng Chengyun wanted to take them home and gave to his family.
"Then we set aside six hundred yuan." Liu Jing said, at that time everyone could buy something to bring back.
Everyone had a good discussion, and Liu Jing said: "Then Shen Tingshuang please help clean up the table." After all, washing dishes was something no fan wanted to watch.
"Okay." Shen Tingshuang didn’t have these twists and turns in her heart. After all, the rest of the guests were cooking, so she has to do the dishes. What's more, for Shen Tingshuang, these people were just human cubs. There was no need to be so strict.  Except Shen Xuan, she couldn’t be called human at all.
Bai Hao: "Thank you Tingshuang!" After speaking, he followed Liu Jing and Shen Xuan to leave the table. Today he was exhausted all day.
Shen Tingshuang began to work. Qin Yueze and Geng Chengyun did not leave. They helped bring the dishes to the kitchen, and Shen Tingshuang said: "You go and rest."
She could see that the others were very tired. As she has spiritual veins in her body she didn’t feel tired at all.
"It's okay." Qin Yueze rolled up his sleeves and began to wash the dishes. Geng Chengyun started to wipe the table.
Shen Tingshuang encouraged them to leave a couple of times but both of them were still there to help. Shen Tingshuang did not continue to persuade, and began to clean the stove.