After Transmigrating, the Bosses Begged Me to Plant the Land - Chapter 57

Geng Chengyun wiped the table: "Tingshuang, two big bags of vegetables, how did you earn them?" He thought about this problem all afternoon and couldn't figure it out. Their team had Qin Yueze in, and they made more than 800 yuan in the afternoon. Shen Tingshuang's two big bags were worth more than that.
Shen Tingshuang: "Farming."
Geng Chengyun looked at Shen Tingshuang with a sense of confusion. He knew she was a farmer, but she could get so many vegetables?
Qin Yueze said: "Tingshuang may mean that she helps people farm, and they donate the two bag of ingredients."
Shen Tingshuang nodded: "That's correct."
Geng Chengyun fell into a deep thought. If he needed to make money next time, he would help the people farm the land.
After tidying up the kitchen, only the living room has Wi-Fi, so Geng Chengyun stayed in the living room to play games.
...
When everyone got up the next morning, they were surprised to find that breakfast had been prepared.
The main reason was that after eating a meal made by them yesterday, Shen Tingshuang was reluctant to let them continue cooking. Yesterday, except for the eggplant that was still acceptable, everything else was difficult to swallow. After all, wasting ingredients was not a good thing.  Besides, cooking didn’t make her feel tired.  So Shen Tingshuang got up at five o’clock, took out the bacon and soaked it in water, then went out and ran around the ancient town.
Her cameraman and photographer immediately dispatched, but they found that after running for five minutes, they were extremely tired. In the end, all the cameramen of the other guests took turns to follow her so that they could complete the shooting at this time.
At 6 o'clock, Shen Tingshuang returned to the house and went to the kitchen. She took out the cabbage and washed it. After washing, the condiments such as green onion, ginger, and garlic were cut open and set aside. She took out a large bowl, pour some flour into it, and then add water to make dough.
Shen Tingshuang with her white hands didn’t look like a farmer, but she kneaded the dough very quickly, and after a while the flour became a smooth dough.  Shen Tingshuang divided the dough into six equal parts and began to make noodles.
She took one part of dough and it quickly turned into thinner and thinner noodles in her hands. Shen Tingshuang placed the noodles on the cutting board and sprinkled them with a layer of flour, then she did the same for the other five doughs.
Shen Tingshuang took out the bacon soaked in the sink, clean them again with running water, and then cut into thin slices. It could be seen that these bacons were carefully selected by the grandpa and grandma. The meat was so red and looked very good.
Shen Tingshuang washed the pot carefully, turn on the fire, wait for the water vapor in the pot to evaporate and pour some oil into it. After it was hot, she added the onion, ginger, and garlic, stirred a while for the aroma to come out then removed them.
Shen Tingshuang then added the slices of bacon. The strong aroma of bacon came out at this moment. She then poured in water until half the pot was filled. Fortunately, this pot was big so that she could add noodles for six people at the same time.
When the water in the pot boiled Shen Tingshuang directly put the noodles in, and finally added the cabbage.
Qin Yueze got up at 6:30, when he opened the door he smelled the fragrance of the house. He walked to the first floor and found that Shen Tingshuang was cooking breakfast: "Get up so early, how was your sleep?"
"Pretty good." Shen Tingshuang filled a bowl of noodles and sprinkled a layer of green onion on it: "Eat breakfast." 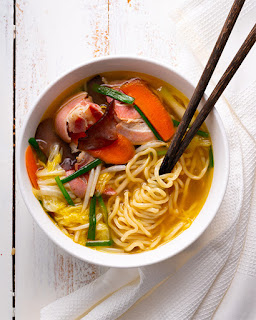 Bacon Noodles here
Qin Yueze thanked her. He knew how to cook because of his childhood, so he had experience in cooking by himself. Of course, whether his cooking skills were particularly good, he couldn’t guarantee.
Shen Tingshuang also served a bowl for herself.
Qin Yueze already held his chopsticks, and the two sat side by side.
At this time, Liu Jing and Shen Xuan were also up. After all, this was a variety show. If they wanted more shots or left a good impression on netizens, they must get up early. They both smelled a delicious scent as soon as they went out, and when they went downstairs, they saw the noodles in the kitchen pot.
Liu Jing said: "Brother Ze, we are sorry you need to get up so early to make breakfast for everyone."
Shen Xuan also echoed: "Yes, Brother Ze has worked hard, this noodle is very appetizing at first sight."
Qin Yueze said: "The noodles was made by Tingshuang."
Liu Jing didn't expect Shen Tingshuang to cook, and smiled awkwardly. She served a bowl of noodles, but because she saw the bacon in it, she only served a small bowl.
Shen Xuan took less than Liu Jing.
The voice on the first floor made Geng Chengyun and Bai Hao woke up from their dreams and they began to wash up casually. When they went downstairs and saw the noodles in the kitchen, they were no longer sleepy.  The two each served a large bowl of noodles.
In fact, Shen Tingshuang portioned the same amount of noodles, but because Liu Jing and the other three were serving themselves, Liu Jing and Shen Xuan took less, so Bai Hao and Geng Chengyun was able to take extraordinarily bigger portion.
Tempted with the delicious smell, both of their bowls were full of noodles. When the two of them finished serving, there were no noodles left in the pot.
Qin Yueze was the first to eat. The noodles were distinct, accompanied by the fragrance of meat and cabbage. When you ate to such a bowl in the morning, your stomach was very comfortable.
Liu Jing also took a bite. Unexpectedly, there was no greasiness of bacon at all. Instead, it was full of fragrance, especially the cabbage inside, which was much better than the boiled cabbage she usually ate!
Although Shen Xuan didn't want to admit it, this bowl of noodles was really delicious.
Bai Hao took a bite, and almost bit his tongue, he shouted happily, "This noodle is too fragrant. I didn't think noodles that have such a delicious noodle aroma will be this good."

The second tune sounded.  A villager shouted: "You two, pull your hands up. The next dance is about to begin."
"Yes, hurry up."
The jealous fire in the eyes of Shen Xuan and Liu Jing was ignited, and they regretted not standing next to Qin Yueze.
Qin Yueze raised Shen Tingshuang's left hand, which were obviously gentle and smooth, but for some reason, the moment she touched Shen Tingshuang's hand, it seemed that there was an electric current flowing through his heart.
Everyone danced again.
Qin Yueze concealed his emotions well and started dancing with the villagers.
At first everyone thought that Shen Tingshuang could not dance, but when she did, they realized that Shen Tingshuang danced well.
When she was still ginseng spirit, Shen Tingshuang liked to imitate people dancing everywhere, and these movements were not difficult for her.
A total of three tunes were danced, and the villagers applauded.
Someone came out carrying a tray with a big horn on it.  The villager said, "This is our custom here. If the guests can finish the wine inside, then your task will be completed!"
Each of the six guests was given a horn, and the wine in it weighed about a catty.
Qin Yueze took a sip and estimated that the alcohol level was at least forty percent.
Bai Hao drank half of the bottle and his face was already a little ruddy: "No way, no way, it's too much!"
Liu Jing took a few sips, and found it a bit spicy.
Shen Xuan could drink some, but it was impossible to down a catty in one breath.
Only Shen Tingshuang picked up the horns and drank all of them.
When Qin Yueze saw this, he quickly thought about how to deal with it, and he was already discussing with the villagers when he heard someone beside Shen Tingshuang said: "This young lady has finished drinking!"
Everyone applauded! "It's great, sister!"
...
"Congratulations, the task is complete!"
Qin Yueze, Bai Hao and others: "?"
After some explanations from the villagers, they realized that this task was actually a trap. Six people only need to finish drinking one of the horns of wine. After all, the program group was not that bad, letting six people drink a catty of wine each.  What's more, this wine was more than 40 percent.
But everyone did not expect they could drink the wine on the same horn. If they calmed down and think a bit, Qin Yueze should have found this clue. But when he saw Shen Tingshuang taking a big sip, his first reaction was to stop it. However, Shen Tingshuang has finished drinking and successfully completed this task.
Liu Jing and others were dumbfounded, this was not only a mouthful or even a glass of wine!
Shen Tingshuang put down the horn and hiccuped. This wine should be made by the villagers themselves with grains, so the taste was decent. Shen Tingshuang was straightforward so when Xia Xia and others saw Shen Tingshuang's movements on the screen, they were all shocked.
A crew member next to Xia Xia said: "Well, can a person finish drinking this in one breath?"
Originally, they designed the trap so that the guests could only pass the test after drinking this wine. If six people couldn’t finish drinking, they would definitely discuss with the villagers. Then this process was just something worth seeing, but Shen Tingshuang drank it straight away.
Everyone looked at Shen Tingshuang's face in the screen, with a little redness among her white skin, she seemed not drunk at all.  For a time, everyone could not describe their feelings at the moment.
...
The villagers took six people to a location by the river, which was one of the spots they have completed during the day. In the evening, the lights by the river were lit up, which was another excitement.
There were tables with a lot of dishes in the shore. There were many tables closer to the land, and there were six chairs on the opposite side by the river. At first glance, the six guests were arranged on the opposite side.
"These dishes are our special snacks here, please take your seats."
The villagers arranged seats based on how much alcohol they had just drunk. People who drink a lot sat at the main table, so Shen Tingshuang sat on the left in the middle, and Baihao sits on the right in the middle.  Shen Tingshuang's left was Qin Yueze and Geng Chengyun, while Bai Hao's right was Shen Xuan and Liu Jing.
Everyone was seated, and everyone had the same small dishes on the table. The portion was not much, but the variety was abundant.  The villagers introduced: "This is our vinegar fish, made with fresh fish from the river."
"This is angelica black chicken soup, which is grown by our villagers."
"This is our little pastry, sweet and sour."
"Yes, it's delicious."
One dish after another, Shen Tingshuang could see the enthusiasm of these villagers: "Thank you."
-----
The author has something to say:
The annoying female partner is about to go offline, don't worry.