After Transmigrating, the Bosses Begged Me to Plant the Land – Chapter 71

The rest of the guests obviously had no opinion.
...
It was late at night when she returned to Xin Yuan Shan, Shen Tingshuang unpacked her luggage, took a shower, and went to sleep.
...
After getting up early the next morning, Shen Tingshuang took out some mutton, which was bought before returning from the prairie.
Shen Tingshuang cleaned the mutton and put it in a large bowl, she put some salt on the top, and rubbed the salt into the meat evenly with her hands. She then added soy sauce and sugar, continued to rub, and then set the meat aside to marinate.
Shen Tingshuang took out another empty bowl, put in starch and water, plus tomato sauce and sugar, then stirred evenly. After that, she took out two empty bowls, put two eggs in one and beat them well, and the other was filled with starch.
Shen Tingshuang took out the marinated mutton, divided it into two portions, and cut one portion into small pieces.
Shen Tingshuang added oil to the pot, and used chopsticks to pass the mutton through a layer of egg liquid, then roll it on the starch, and then put it into the pot.  In this way, all the cut mutton was deep-fried in the pan.
Next, Shen Tingshuang poured out the oil in the pot and put in the tomato sauce just prepared. As the temperature in the pot rose, the tomato sauce began to slowly solidify. Shen Tingshuang then poured the tomato sauce on the deep fried mutton from before and stirred evenly.
After finishing these, Shen Tingshuang did not stop. After cleaning the pot, she poured some oil, and added the other marinated mutton previously. She then added cumin powder and chili powder, then wait for the red color of the lamb to slowly fade and the meat smell to come out. When it was done, Shen Tingshuang took the lamb out of the pot.
During the time Shen Tingshuang was away, Yingying was helping to hand in fruit to Super Mall. After returning, she thought deeply that Yingying liked to eat sweet food, so she made two mutton dishes. One serving was hot and spicy and one serving was sweet and sour. 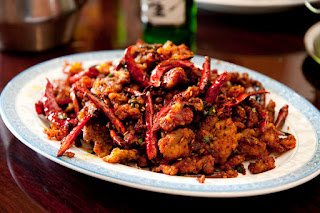 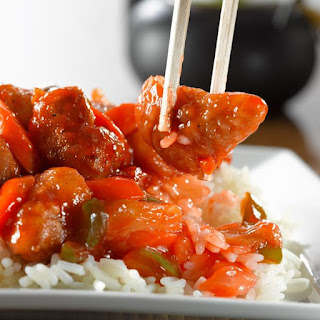 Sweet and Sour (similar recipe but using pork here)
Shen Tingshuang divided the meat into two parts. One with more sweet and sour mutton for Yingying while Shen Tingshuang’s was the opposite, she took more of the hot and spicy mutton.
After making the meal, Shen Tingshuang shouted: "Yingying."
After a while, Yingying flew over. Shen Tingshuang pushed the portion with more sweet and sour mutton to Yingying.
Yingying took a bite, his eyes lit up, but then he pretended to still be indifferent, but after a while, he finished the plate of mutton, which was rare. He said thank you, and then left.
Shen Tingshuang also ate. Actually, the sweet and sour mutton was quite delicious, this mutton was fresh, and the tomato sauce was made by Shen Tingshuang using her own tomatoes. So they were naturally good. The sweetness and sourness of the mutton in tomato sauce, made people couldn’t stop once they started eating.
...
The seedlings from Xin Yuan Shan grew faster than regular seedlings, especially the apricot seedling that was watered with boiling water by Yao Dazhu.
After Shen Tingshuang came to look at it, she poured some spiritual energy to it, which was equivalent to watering the seedling twice with energy, so it quickly grew into a tree and bore two fruits.
Yao Dazhu’s wife picked the fruit and cut it into five. The main reason was that it finally bore fruit so everyone in the family wanted to taste it.
Although this apricot was not as good as Xin Yuan Shan’s, it was still much better than the one grown at home. Everyone tasted it, and the taste was sweet and delicious.
Yao Dazhu nodded again and again. In the future, this apricot tree would surely bear a lot of fruit. There would be plenty of it to eat at home. Or if they sold it at that time, they would be able to get a good price. The days would definitely be better, and Yao Village would definitely get better.
Besides Yao Dazhu's home, the seedlings in the other villagers' homes also grow very fast, but they haven’t bore any fruit yet. Every time they saw these seedlings, everyone was grateful to Shen Tingshuang.
...
8pm was the best surfing time on the Internet, at that time a topic suddenly climed to the hot search list on Weibo.
#Xin Yuan Shan’s fruit contains lots of hormones#

Everyone found this topic inexplicable. After all, both the Market Supervision Bureau and Tu Yuan have spoken highly of the fruits grown by Shen Tingshuang.
Many people read the topic just out of curiosity, and founs out that the blogger who posted this Weibo has hundreds of thousands of followers, and the accompanying evidence was a foreign test report.
[#Xin Yuan Shan’s fruit contains lots of hormones# not long ago I bought the fruits of Xin Yuan Shan. As a result, I took a test and found that all hormones were above standard. Look at the report for details.]
After everyone read it, they all complained.
[Am I wrong, tested abroad?]
[Poster, you bought a piece of fruit and went abroad to test it?]
...
Shen Tingshuang's fans didn’t have to act at all when some big guys already found out the relevant information.
The case was solved in less than ten minutes.