After Transmigrating, the Bosses Begged Me to Plant the Land - Chapter 42

Shen Tingshuang slept soundly, but someone had insomnia.
Mr. Xie, who was instructed by Wang Qian lied in the hospital’s bed, he hadn't slept well for several nights. It wasn't that he doesn’t want to sleep, but, as long as his eyes were closed, he would have a nightmare.
He felt in a trance. People in his family said that he was too greedy for money to be able to do such a thing.  The person in the same ward spoke for Shen Tingshuang and said that he did such a thing, he would suffer retribution.
He stared at the dark ward and thought to himself, was this really retribution?
Beside Xie's insomnia, Qin Yueze's big fan Si Maidong also couldn't sleep. She has followed Qin Yueze for so many years and never seen him post Weibo for a person. Even if he has a rumored relationship with an actress, he has never posted an explanation on Weibo.
For the birthday party, Qin Yueze chose Xin Yuan Shan's fruit, they could understand that. After all, Xin Yuan Shan's fruit was delicious, and that person also saved Qin Yueze.
But now that something happened to Xin Yuan Shan, before the matter was investigated, Qin Yueze actually took the initiative to speak for Xin Yuan Shan. What if there was indeed a problem with Xin Yuan Shan's fruit?
Si Maidong thought for a day but couldn't figure it out, and finally sent a message to Ai Ming. Ai Ming sighed after seeing the message sent by Si Maidong. The reason why Qin Yueze did this was probably because of Shen Tingshuang's life experience.
When Qin Yueze was young, his parents were busy with business and seldom accompanied him. At the age of ten, Qin Yueze's parents died unexpectedly. Without the protection of his parents, the journey of growth was always much harder than other children.
Although Shen Tingshuang has parents, it was as if she didn't have any. Qin Yueze may have seen himself in Shen Tingshuang.
At five o'clock in the morning the task arrived as scheduled: "Please plant 40 kinds of condiments within 43 hours."
"Condiments?" Shen Tingshuang grasped her hair.
"Green onion, ginger, garlic." The system said.
Shen Tingshuang who has grown several different kinds of peppers: "How many kinds of condiments are green onions and chives?"
"2 kinds." The system said.
Then this would be easy to handle, Shen Tingshuang suddenly thought of all kinds of condiment seeds.
In addition to the green onion, ginger, and garlic that have been planted, there were four different kinds of peppers. Shen Tingshuang counted them with her fingers: "There are also cinnamon, star anise, basil, coriander, chili, as well as bay leaves, Sichuan pepper, black pepper, wood ginger,  mint, cloves, Chinese cinnamon, and fennel."
Shen Tingshuang bought some from a certain treasure before, but they were not complete, so Shen Tingshuang had to visit the city again today. But she would prepare the fruits for Super Mall.

Lili was a new intern in X. She was humble and has a good relationship with the security guard. Seeing that Lili has said so, the security guard also opened the railing. Although in a place like X store, how weird it looked to park a small trailer.
Shen Tingshuang parked the car and entered the store with Lili. Lili asked as she walked, "Do you have any specific needs for the car?"
"It should be able to run on mountain roads, with large capacity and comfort." After thinking about it, Shen Tingshuang added another sentence: "In black is the best."
Lili guide Shen Tingshuang inside: "Let’s take a look at this SUV. This is the latest SUV.'
Shen Tingshuang tried it. She felt not very satisfied with this one. Lili was not in a hurry, and brought her to try several other models. Shen Tingshuang was still not satisfied.
"Wait a moment." Lili went to pour a cup of chrysanthemum tea, and the colleagues on the side couldn't stand it anymore. So while Lili was pouring tea, one of them said: "That woman can't afford our car by her appearance. Don't take her to long, you are just wasting time."
Lili said indifferently: "It doesn't matter, I will just take this as practice while getting to know the cars better"
"This is chrysanthemum tea. You moisten your mouth a little, and I will continue show you some more."
When Shen Tingshuang saw Qin Yueze's car, Lili said: "This car is used by many people. It is relatively low-key, but it has good performance."
"How much?" After Shen Tingshuang tried it, she was satisfied with this.
Lili said: "Standard configuration is 1.1 million, the mid-range is 1.2 million, and the top configuration is 1.3 million."
Shen Tingshuang glanced at her Alipay, 678,391 yuan, not enough. Lili's colleague suddenly asked: "Miss, do you not have enough money?"
Shen Tingshuang nodded: "Yes."
The colleague looked at Lili and showed an expression that said I had guessed. Lili said: "Buy a car now, you can pay 50% down payment and the rest can be paid by mortgage."
"Wait for a moment." Shen Tingshuang felt that mortgage was too complicated. It's better to find someone to advance some money.
Lili said "OK."
When Shen Tingshuang went to make a call, the colleagues next to Lili said: "She may be someone's mistress, call and find the man to give more money so she can buy it."
Next colleague agreed "She looks so beautiful, this must be the case."
Another one said "But she was too ruthless. She is asking for a 1.1 million car at once."
...
The money for a certain treasure shop sale could only be credited to Shen Tingshuang account after the buyer confirms the receipt, so some of the payment has not yet arrived. She has many pending payments but was a little sort on accessible funds right now.
-----
The author has something to say:
Ah Qi remember a joke she saw a long time ago.
A beautiful woman drives a Minicooper. Then at the traffic light, a passerby said that this woman is a mistress at first sight.
Then the beautiful woman who drove yelled: "Have you ever seen a mistress get up to work at 7 o'clock in the morning?" 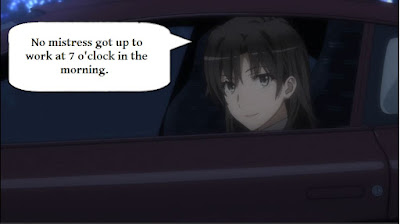