After Transmigrating, the Bosses Begged Me to Plant the Land – Chapter 73

The portion was small, but the variety was rich. After a while, the table in front of everyone was full of plates.
Geng Chengyun couldn't help himself, and had started eating with his chopsticks.
The first one Shen Tingshuang ate was the crab dumplings. The authentic crab dumplings were very large, but the one served here was obviously a mini version. The restaurant probably knew that there were too many types of breakfast they served. If there also gave bigger servings, the guests wouldn’t be able to eat anymore. 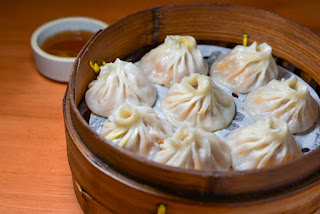 Crab Dumplings, here
This crab dumpling has a thin skin and a lot of meat. It looked like a soup dumpling. It seems that the filling inside can be vaguely seen from the outside.
Shen Tingshuang gently pokes the surface of the skin open, and drank the soup inside with a spoon. It was quite delicious. Next was to taste the stuffing inside. The meat did contain crab roe, which was full of fresh flavor and thin skin. Dip in some vinegar and it could instantly relieve a lot of greasiness. Although currently was not crab season yet, but this filling was really good.
Shen Tingshuang drank the milk next to her, and then started to eat a full meal.
In addition to the crab dumplings, there was also a pan-fried dumpling in front of her, of course there was only one. The shell was very crispy by frying. After biting it open, the fillings were exposed. This pan-fried dumpling has the taste of fresh shrimp, and the meat was mixed with a whole shrimp, which was very delicious. 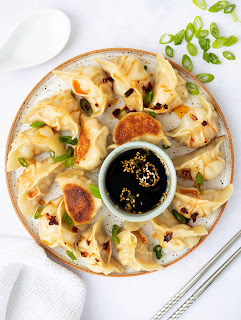 Pork and Shrimp Dumplings, here
Shen Tingshuang ate the pan-fried buns contentedly, and then started to eat the scallion noodle soup. However, Shen Tingshuang finished eating it in a few bites, and drank all the soup. The soup was made from chicken broth. Next, there were sauced duck, rice balls, etc., and she tasted them one by one until they were all eaten. 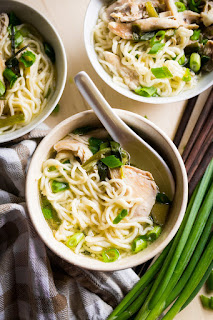 Scallion Noodles Soup, here
The breakfast was indeed prepared by the program team carefully, and it tasted good, maybe it was indeed a good taste or perhaps it was because they were all hungry. In the end, everyone cleaned up what was in front of them earlier.
"I’s so full. I haven’t eaten like this for a long time." Bai Hao said.
Gu Yuan also said: "I have never eaten like this in my life."
As soon as these words came out, netizens started posting comments.
[Haha, I feel that the goddess is getting more and more grounded.]
[Well, I feel that since everyone knows that Ah Shuang hates waste, they try to finish every meal as much as possible.]
[Maybe it’s because these breakfasts are very delicious?]
…
The task came within a minute after the meal. The staff directly handed the task card to Qin Yueze.
When Qin Yueze took the task card, Bai Hao said: "I haven't seen this thing for a long time." They didn't see the mission card for two consecutive recordings. To be honest, they still missed it a bit.
"Don't miss it, it must be nothing good." Liu Jing said.
Everyone was silent.
Qin Yueze had already opened the mission card and read: "Today's first mission: Please guests arrive at the landmark of M City before ten o'clock and find the second mission card." The landmark was nearby, not far away, but it took at least half an hour to walk past.
"What time is it?" Gu Yuan asked.
The waiter said: "It's half past nine."
Everyone looked at each other, and Qin Yueze had already got up: "Go."
Everyone ran downstairs. Because of the limited time and the traffic lights in the middle, everyone almost ran all the way on the road.
Bai Hao wiped the sweat on his head: "It looks close, I didn't expect to walk so far."
M City was crowded, and there were six people running together, and there was also a cameraman behind. Everyone knew at a glance that this was definitely shooting something.
The local people took closer look: "Damn, is that Qin Yueze?"
"Behind is Ah Shuang!"
"Ahhhh, there is Gu Yuan!"
"Wait for me, I will go too."
After a while, in addition to the fans, there were also passers-by who had nothing to do. They all followed the six guests ran to the landmark.
At exactly 9:59: "Quickly, look for the mission card." Bai Hao wiped off his forehead with his hand. He was exhausted.
Geng Chengyun leaned directly on the railing, no more, he was already running out of strength.
Gu Yuan was raising her head, so she saw the task card the fastest: "The task is stuck there!"
Everyone saw that the task card was placed on the plaque at the entrance of the landmark building. It must be at least three meters high.
Bai Hao was a little crazy: "So high, how to get it?"
A staff member on the side prompted: "The deadline is still 40 seconds away. If the guests fail to get the second task card, you will be punished."
Qin Yueze has been looking around. Was there anything similar to a bamboo pole, or a broom.
Shen Tingshuang opened her mouth: "I will try."
In front of them was the fence, plus many people were watching, so Shen Tingshuang couldn’t fly, but she could use other methods.
For example, first ran up, then jumped to the fence, then use the fence to fly to the plaque, and then took the second task card.  This action was very coherent and caused screams from the onlookers.
"Ahhhh, Ah Shuang, you are so handsome!"
"Ah Shuang, I want to marry you!"
Qin Yueze looked back at the crowd, as if he wanted to find out who was saying this.
[Hahaha, my brother looked back and I laughed.]
[He must be thinking, who will grab my girlfriend with me!]
But this episode did not go on for a long time, Qin Yueze and five people came behind Shen Tingshuang, Shen Tingshuang opened the task card: "Please come to the top floor of M landmark."
"Top floor, go in, go in and take the elevator." After Gu Yuan finished speaking, everyone rushed inside.  The crowd onlookers did not have tickets, and with the temporary control of the landmark building, the crowd was blocked outside.
While in the elevator, Gu Yuan said, "Fortunately, the program crew did not let we walk to the top floor."

Liu Jing on the side took a look. If that was the case, let alone her, even the cameraman would give up.
The elevator speed was very fast, reaching the top of the building in 70 seconds. Six people walked out of the elevator and came to the top floor. All around them were floor-to-ceiling windows, so they could clearly see the scenery outside.
What they could see here was farther than the scenery seen from the revolving restaurant, the highest building of M City, or even the entire China, was here. You could imagine how high it was.
When the guests were happy to enjoy the scenery, the third task card came again.
Geng Chengyun asked: "Is it right? Because the last few recording the program team did not issue mission cards, so today they must have decided to use them all together."
"You probably guessed it right."
Qin Yueze opened the task card: "Please come to the outside of the building, and run around the building."
Liu Jing asked first: "What is coming out of the building?"
Bai Hao swallowed, "Look outside."
Everyone looked out the window. Actually, when they just came up they also saw it. There was a circle of glass road outside the tallest floor, but the glass road did not have any guardrails. It just stretched out out of thin air.
Everyone thought it was just the design of the building. They didn't expect people to be able to go up. 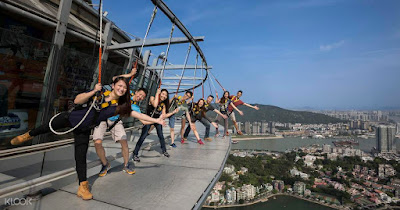 Skywalk
Gu Yuan's expression changed: "No, no?"
The cameraman followed the guest's view and took videos of the outside, and netizens' comments immediately exploded.
[Hahaha, shit, this is scary.]
[On the web, the 199th floor of the M city landmark is about 450 meters, this height is not low.]
[I have begun to tremble.]
Sure enough, a staff member came over and gestured to the six guests: "The guests, please go here."
Everyone followed and walked outside. Some staff members had already put on their helmets and fastened their safety ropes: "Let me demonstrate to the guests." After that, he ran along the outer glass circle.
Gu Yuan's faces were pale with fright: "They asked us to do this?"
Liu Jing: "Ha ha." She was a courageous person, but standing on this glass, it was very clear, plus there was no handrail. Let alone running, she dared not even walk.
Geng Chengyun silently retreated and said, "Can I not participate?"
The staff ran back in a circle: "This task is like this. Which guest will try it first?"
There was silence in the crowd for a while, and then Shen Tingshuang said, "I'll do it first." This height was really nothing to her.
The staff began to outfit a hat to Shen Tingshuang and fasten the safety rope. This safety rope was tied from the top, left, and bottom three directions. It was a moving rope, so everyone wouldn’t have to worry about falling.
Because the task card was written to run a lap, the key point was "run", so after the staff had said its ready, Shen Tingshuang ran.
The cameraman standing indoors almost missed Shen Tingshuang's shadow.
[Am I wrong?]
[F*ck, this is too awesome.]
[Ah Shuang is mighty!]
[Too fast and only the afterimages left?]
When the guests hadn't recovered, Shen Tingshuang had already run a lap, and she stood in front of the staff.  The staff was dumbfounded.
Shen Tingshuang asked, "Are you okay?"
The staff reacted: "Well, okay, okay." They were the staffs who were the least afraid of heights and even then they couldn’t run at such a speed. No, to be precise, even on land, they couldn’t run so fast.
The staff took off the equipment on Shen Tingshuang and looked back at the other guests: "Who would like to try it next?"
Qin Yueze stood up and said, "I'll do it."
[Hahaha, my brother doesn't want to make a fool of himself in front of Ah Shuang.]
[I believe my brother can!]
Qin Yueze was not as fast as Shen Tingshuang, but he ran off easily.
The staff glanced at each other. When did walking on a glass become so easy?
None of the remaining four guests wanted to go next. In the end, Bai Hao was chosen. He ran for two steps. After seeing the scenery below, he was too scared to even move. After a while, he stood up and continued running, but his face was not very good.
The staff nodded, this was the correct response.
Next was Liu Jing. She also paused for several times before completing the task without even running away. When she walked back inside, she was silent for a while.
As for Geng Chengyun and Gu Yuan, no one wanted to go. It was really scary. But, there was no way, today’s task must be done, so Gu Yuan first said: "Let the big one go in front of the small one, so you should come first."
Geng Chengyun: "Ladies first, you come first."  Both didn't want to go first, in the end, Gu Yuan had to propose: "Should we play rock paper scissors? Whoever wins will be the last."
"Okay."  In the end, Geng Chengyun won, so Gu Yuan would run first.