After Transmigrating, the Bosses Begged Me to Plant the Land – Chapter 47

This person who was still okay in the morning now venting more and getting less air.
Shen Tingshuang fed the water in the cup to Yao Dazhu.
Yao Dazhu’s younger brother Yao Daxing reacted first: "What are you doing?"
After shouting, Yao Daxing was about to came forward to take the cup, but was dragged by Qian Tianguo, the deputy secretary of the village: "Don't worry, you look at Dazhu first."
It's not that they haven't fed Dazhu any water in the afternoon, it's just that this person couldn't drink it, and all the water flowed out of his mouth.
Yao Daxing looked forward and saw that Shen Tingshuang's water entered Yao Dazhu's mouth, and the lifeless gray on Yao Dazhu's face was slowly fading.
"This ..."
Shen Tingshuang finished giving the water, and then she opened village head's clothes clothes. Emergency doctors came to just simply dress the wounds, which in some places still oozing blood.
Shen Tingshuang tore off the white gauze, put the medicinal herbs she picked on it, and then took the opportunity to infuse some spiritual energy into Yao Dazhu's body.
The bleedings stopped at once.
Shen Tingshuang only found a few serious wounds in Yao Dazhu.
Yao Daxing and other family members who lived with Yao Daxing didn't react to this scene.
Qian Tianguo walked up from the side of Shen Tingshuang and made a silent gesture, and then she left through the back door.
Yao Dazhu's complexion gradually improved, and the knocks on the door outside the house made everyone come back to their senses.
Qian Tianguo wanted to calm down, and immediately said: "Quickly, call 120 again!"
…
120 came over this time and took Yao Dazhu to the hospital.
Hearing this result, Shen Tingshuang went to rest with peace of mind.
…
When she got up the next morning, Shen Tingshuang picked some fruits and went to Shao Feng.
Shao Feng was building new warehouse recently. Judging from the foundation, the warehouse would be quite large.
Shao Feng's mother was enthusiastic seeing Shen Tingshuang and said: "Tingshuang is here, are you here to find Xiaofeng?"
"Yes, I brought a new fruit."
Shao Feng's mother thanked her again, and then called Shao Feng out.
Shen Tingshuang: "The courier money paid last time shouldn't be enough, right? I'll transfer some more to you. "
Shao Feng: "Don't be so rushed, it will be settled once a month."
"That won't work." Shen Tingshuang still transferred one hundred thousand yuan to Shao Feng.
She didn't stay there too long. After the transfer, Shen Tingshuang left.
Looking at Shen Tingshuang's back, Shao Feng did not return to his mind for a long time.
Shao Feng's mother watched for a long time, but Shao Feng was still standing there: "Xiaofeng, you are staring."
There were too many couriers sent before. When Shao Feng’s father saw this, he simply went home to help send the courier after he was done working in the factory. Even then, it took several days for all the goods to be delivered.
After resting for some time, Shao Feng was busy building a new warehouse again.
The family was very busy every day, but they all felt happy.
…
Back on the mountain, at five o'clock in the afternoon, Shen Tingshuang started the live broadcast. Before sharing the live broadcast link to Weibo, many fans already came in. Shen Tingshuang smiled and waved to the camera: "Long time no see."
[Ah Shuang, you still remember to broadcast.]
[Yes, how many days have I counted since it you have not been doing live broadcast.]
[Fruits in the store are not in stock, even the live broadcast was not regular, I cry.]
"Recently, I have been busy farming, so that everyone can eat more delicious fruits." Of course, the premise was that the system gave these tasks.
As soon as they heard this reason, netizens stopped being confused.
[Ah Shuang has worked hard!]
[You have worked hard. I hope to get new fruits quickly.]
[Seeing the mountain is so beautiful.]
On Xin Yuan Shan, in addition to the various fruits and vegetables that Shen Tingshuang has already planted, the rest of the place was still a bit desolate, but there were now many trees on the land above the courtyard.
Now that autumn was approaching, the leaves of these trees are yellow, and they looked very pretty.
[What is the content of the live broadcast today?]
Shen Tingshuang: "I haven't figured it out yet, what do you want to watch?" She just clicked on this software after thinking that she hasn't done live broadcast for a long time.
[I want to watch Miss Sister eat.]
[Me too. It is also fine to make snail noodles, or to eat fruits.]
[I agree~]
…
Shen Tingshuang: "Okay. The strawberries are ripe, so I will take everyone to see."
The strawberries were planted under the grapes, extending from both sides. Currently the ground was full of red fruits. 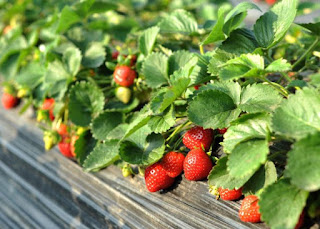 Shen Tingshuang said: "I am sorry, strawberries have very short shelf live, so even if they are sold later, it is estimated to be only within City B."
Strawberries were too delicate and easy to break. After Shen Tingshuang put it into her mouth, the red strawberry tasted fragrant and sweet .
Shen Tingshuang finished the fruit and picked another one.
[Ahhhhhh!]
[Although I will be envious every time I watch young lady eating, I still persistently watching it.]
…
Sitting in front of the screen, Shao Feng was thinking. If they wanted to send strawberries later, they could use a styrofoam box and then put in an ice pack so that netizens nearby could receive the fruit safely.
…
After the live broadcast, Shen Tingshuang asked the system: "What's the task tomorrow?"
"The host's funds to reach 1 million yuan in five days."
The smile on Shen Tingshuang's faces gradually condensed: "The funds in hand, reach 1 million yuan?"
"Yes!"
Shen Tingshuang: "No, what kind of ghost mission is this?" Every time she got used to the newly released mission, the system always developed another weird mission.
"It's a straight forward task, host, come on!"
Shen Tingshuang opened her Alipay, except for the last time she bought a car, installed a sun room, bought seeds, and transferred money to Shao Feng, she has no other consumptions.
There was basically nothing to spend on. On a certain treasure, these past two restocking combined already made almost 3 million. However, because some buyer did not confirm arrival of the goods, there are only 400,000 yuan on her account.

After Shen Tingshuang thought about it, she quickly decided: "Add."
"Noted." The mechanical sound said: "Addition successful. After the task is complete, 35% of spiritual veins will be recovered."
…
Shen Tingshuang picked up a trailer full of fruits and sent it to Shao Feng, she also asked if he wanted her to help packing.
Shao Feng said: "No need, you can go back to plant the land and pick fruits." He has hired 30 temporary helpers today.
…
Shen Tingshuang went back to the mountain to pick more fruits. In fact, she wanted to change to a large truck, but her driver's license did not allow her to drive it.
Shen Tingshuang picked longan and cantaloupe, put them at the foot of the mountain, and then waited for them to get sold out in the morning before loading grapes.
This would ensure the fruits that customers buy were fresh.
-----
The author has something to say:
Ah Qi also want to make one million a day like this.
<< Previous chapter | Next chapter >>

If you enjoy my work, please consider sending this sleep deprived mtl-er some ko-fi. =)
Leave a review on Novelupdates