After Transmigrating, the Bosses Begged Me to Plant the Land – Chapter 72

Netizens were surprised to find that Shen Tingshuang not only did not stop selling fruits because of the hot search, but fixed the time to put them on the shelves. But when the happiness was over, everyone was sad again. Even if there were 300,000 copies of fruit, they might still not be able to grab any.
…
When Qin Yueze came to Shen Tingshuang, she was cutting leeks on the mountain. In addition to leeks, she also picked okra and king trumpet mushroom, and finally picked two dragon fruits. 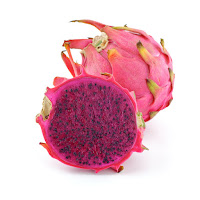 Dragon fruits here
After returning from the last recording, Shen Tingshuang made chili sauce. Today, she planned to use this sauce for cooking.
Seeing Qin Yueze coming over, Shen Tingshuang carried a basket: "Have you had lunch?"
Qin Yueze: "Not yet."
"Then go to the courtyard house first and talk while eating."
"Okay." Qin Yueze drove his car to the courtyard, and then went into the kitchen with Shen Tingshuang to help with cooking.
"You just squeeze the dragon fruits into juice." Shen Tingshuang said.
There was a juicer in the kitchen. Shen Tingshuang bought it in VIVI live broadcast room a long time ago, and the quality was not bad. She often used it.
Qin Yueze put the dragon fruit in the sink, washed them down, then peeled off the skin. He then cut the pulp into pieces, and loaded it into the juicer.
Shen Tingshuang was not idle, she added water to the pot, then cleaned the okra and set them aside. When the water in the pot was boiling, Shen Tingshuang put in the okra, blanched them for a while and then put them on a plate, she then poured the sauce made yesterday on top, and the okra dish was ready. 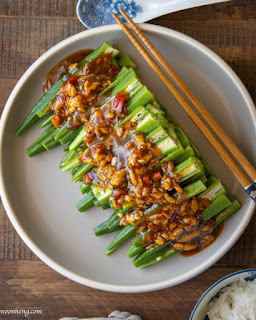 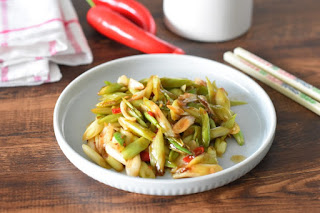 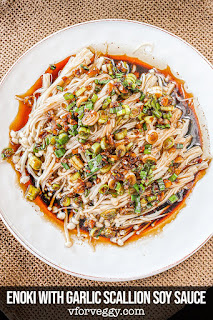 Chili mushrooms. Similar recipe made with enoki mushrooms
Three dishes, two cups of dragon fruit juice, plus white rice, the Chinese meal was ready.
The two brought the dishes and juice to the dining room next door and sat opposite each other.
Qin Yueze knew that when Shen Tingshuang was with food, she didn't like talking or wasting, so he sat on the opposite side and started eating.
This rice was also grown by Shen Tingshuang, and it has never been sold in the market. It has a strong fragrance. The appearance of the rice was also clear and granular, as if it has been carefully selected. Not only by smelling it, but by eating a bite one could also smell the rich aroma of the rice. With this kind of rice, people could easily eat three bowls in one sitting.
Qin Yueze tasted the leeks first, the leeks on the plate were actually a bit long, but this did not affect the taste. On the contrary, it integrated the aroma of the sauce. The leek was originally very fragrant, but after frying with this sauce, the flavor was brought to the extreme. The sauce was a bit spicy, but this kind of combination seemed to be wonderful.
After he tasted the king trumpet mushrooms, Qin Yueze found that the sauce combined with leeks, bringing the scent of leeks to the extreme. But when combined with king trumpet mushrooms, it gave people the illusion that they were eating some kind of meat.  With okra, the sauce covered all the shortcomings of okra, leaving only its unique fragrance.
After eating these, Qin Yueze took a sip of the dragon fruit juice. The soft and sweet dragon fruit scent continues from his mouth to his stomach, and then spreads throughout his body. This was really a pleasurable lunch.
The two finished eating quickly. Qin Yueze helped Shen Tingshuang clean up the kitchen, and then he said: "I heard Pei family and few others came to talk about cooperation?"
Shen Tingshuang nodded slightly, Qin Group was the most powerful business group in China, Qin Yueze was the head of Qin Group, and so it was not surprising for him to know. "I came over to say, you don't need to be so tired, those fruits, if you don't want to put them on the shelves, you don't have to." One hundred thousand fruits, just picking took a lot of time.
Qin Yueze knows that Shen Tingshuang might be pressured because of the logistics building.
Shen Tingshuang: "Uh, it's not really tired for me, but it may be tired for your employees."
Qin Yueze was a little puzzled.
Shen Tingshuang controlled the grapes not far away with spiritual energy, picked two grapes, and then handed them to Qin Yueze: "Did you forget?"
Qin Yueze has understood. Shen Tingshuang asked if he has forgotten that Shen Tingshuang was not an ordinary person. Qin Yueze picked up this grape and laughed. He did not forget, he just thought  Shen Tingshuang should live the life she liked.
Shen Tingshuang also smiled: "Besides, my fans also want to eat." Those who liked her, she should also give some rewards. She put 300,000 pieces of fruit on the shelves every month, was probably the best reward that could be thought of by Shen Tingshuang.
Qin Yueze ate the grapes: "Are you free tonight?  Do you want to go to the movies?"
Shen Tingshuang thought about it. She realized that she hasn’t watched a movie for a long time: "What film is there?"
"A suspense film, is it okay?"
"Okay."
Qin Yueze smiled deeper: "Then I will pick you up at half past five. Let's go to dinner first, and then go to the movies."
"Okay."
No matter what happened today, Shen Tingshuang agreed.
…
In the Qin Group, everyone found that chairman was extraordinarily kind today. Even if they did something wrong, Qin Yueze only said indifferently: "Pay attention next time."

Even at the meeting before work, everyone still saw a smile on the chairman's face?
They must be having hallucinations. They have been working in the Qin Group for so long and no one has seen chairman smile before!
Everyone was discussing in their group guessing what happened, but unfortunately, no one could guess. Only Qin Yueze’s secretary knew, because he also went to Xin Yuan Shan. Of course, it was impossible for him to told his colleagues in the company the real reason. He could become Qin Yueze's secretary was due to many reasons. His ability to keep a secret was naturally one of them.
…
It was less than five o'clock, when Zhizhi flew over: "Ah Shuang, someone is looking for you down the mountain."
Shen Tingshuang was a little bit puzzled. Qin Yueze said half past five. Why did he come early?
However, there was nothing else she needed to do anyway, so Shen Tingshuang went down the mountain. As a result, she did not expect that the person at the foot of the mountain was not Qin Yueze, but Fu Letian.
Shen Tingshuang was too lazy to respond and directly turned to leave. Fu Letian immediately stepped forward. He wanted to grab Shen Tingshuang, but it was a pity that Shen Tingshuang could accurately avoid his outstretched hand even if her back was facing him.
Shen Tingshuang turned around. When she turned around, her eyes were full of indifference.
Fu Letian said "Tingshuang, listen to me, I really like you. Your sister forced me back then, so I had to be with her."
Shen Tingshuang eyes slightly opened, she seemed to have heard the most disgusting words in the world. She sealed Fu Letian's mouth with spiritual energy, and then quickly left. It’s too disgusting!
Zhizhi naturally saw this scene, and realized that she had done something wrong: "I'm sorry, Ah Shuang."
After Shen Tingshuang suppressed the nausea in her heart, she said: "If he come again next time, don't tell me."
Fu Letian at the foot of the mountain was terrified. He was good previously but then suddenly couldn't speak. However, what surprised him even more was that he rushed up to Xin Yuan Shan and found that he was still on the spot no matter how long he ran. What has happened? After a while, Fu Letian left without looking back. He would never come here again.
…
On the way to Xin Yuan Shan, Qin Yueze saw Fu Letian running out. Qin Yueze eyebrows frowned slightly.
At half past five, Qin Yueze came to Xin Yuan Shan as scheduled.
Sitting in Qin Yueze’s car, Shen Tingshuang suddenly thought that when Qin Yueze confessed before, she only felt incredible, but when she thought about it, she did not reject it.
Hearing Fu Letian's confession, Shen Tingshuang's whole body was disgusted, she almost vomited.
Seeing Shen Tingshuang's head shook, Qin Yueze asked, "What's the matter?"
"Nothing." She just thought of something disgusting.
But after seeing Qin Yueze's reservation for dinner, this emotion immediately disappeared. Unexpectedly, the dinner was a hot pot, and it was Jiugongge hot pot. 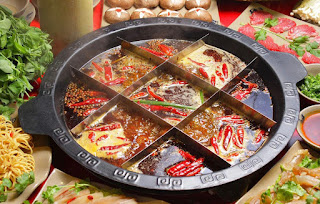 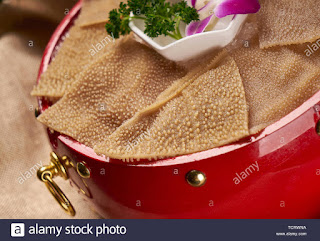 Hairy belly
Shen Tingshuang suddenly found that Qin Yueze seemed to have been taking care of her when eating: "You eat too."
Qin Yueze: "I have eaten." It’s just he didn’t eat much. For him, watching Shen Tingshuang eat was the greatest happiness.
After the two of them finished eating, they came to the cinema. Before getting off the car, Qin Yueze took some masks and asked Shen Tingshuang whether she wanted to wear one. She shook her head.
Qin Yueze put the masks back in the car, and then went to the cinema side by side with Shen Tingshuang.
****
TN:
Remember Chinese Bayberry, one of the fruit Ah Shuang sell?
Dianxi Xiaoge, a Chinese youtuber I followed just release a video about the fruit. Check it out here.