After Transmigrating, the Bosses Begged Me to Plant the Land – Chapter 23

Tonight's extra chapter. Enjoy~
- MD
*****
The chef didn't understand how he had suddenly made Elder Pei angry, and he trembled.
Lu Zhengye had mixed feelings in his heart, but he didn't expect that the two kinds of chili peppers from Shen Ting were so delicious. With only these ingredients, the taste of the dishes improved so much.
If Super Mall only bought apricots and peaches, Lu's family thought it won't affect much, but if Super Mall buys all the vegetables, fruits and others from Shen Tingshuang, in the future, this Super Mall will definitely be incredible.
Thinking of this, Lu Zhengye didn't dare to despise Shen Tingshuang anymore, and Li Xiuwei was also thought the same. He didn't expect that the little girl's vegetables were so delicious.
Although Pei Wenshu felt distressed, he didn't dare to change his face directly like his father, but he was dripping blood in his heart. How many peppers could be in the basket? This dish must have used more than half.
But he still has to keep smiling. Being an adult was really exhausting.
As soon as they ate the fried pork with chili, the rest of the dishes were not as delicious. 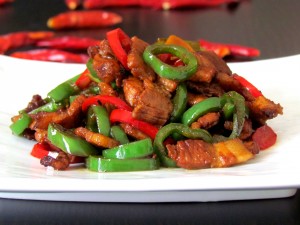 Sauteed Pork with Chili here
After a few conversations, everyone put down their chopsticks.
While they were chatting, the servant outside suddenly said, "Master, the Qin family steward is here."
The Qin family was one of the four major families in China, and the Qin family steward was Cheng De.
Everyone quickly got up. The Qin family was different from the Pei family and the Fu family. They were the most upper-class family in China, and even with only the housekeepers from the Qin family they did not dare to act reckless.
Cheng De was a person over 50 years old, but you can't tell his exact age at all. He came in with a gift, and after greeting everyone, he said: "My master Qin asked me to give a gift to Master Pei. May you live as long as the southern mountain." (TN: Idiom, 寿比南山/shòu bǐ nán shān)
Elder Pei personally accepted the gift: "Steward Cheng is too polite, can you sit down for some refreshments?"
Cheng De declined:"There are still things at home, I am sorry to not be able to enjoy your hospitality. "
A big portion on the banquet participants escorted Cheng De away, except for Shen Tingshuang and Lu An'an.
Lu An'an: "Why don't you send him off?"
Shen Tingshuang wanted to say that she didn't know this person, and she was not interested in the Qin family: "So many people have gone." The implication was that she was not needed.
Lu An'an smiled: "Me too." Although the Qin family was very powerful, she doesn't favor the Qin family either.
"However, I am very curious about this Young Master Qin. He has never appeared before." Lu An'an said: "Some people say he is ugly, and some people say he is antisocial, but he is really good. He took everything that was taken by his uncle from the Qin family back to his own hands little by little."
Shen Tingshuang had no idea about these giants, so she just listened in silence. Fortunately, Elder Pei and his party came back soon.

After lunch, Shen Tingshuang went back first. Although Elder Pei was reluctant, thinking that she still had such a big mountain to take care of, he asked Old Ding to send her back.
Not long after Shen Tingshuang left, Pei Rui came back.
Pei Rui has a very important hacking contest today, so he gave Elder Pei his birthday gift earlier last night.
On the way back, Pei Rui bought another gift, and as soon as he got home, he gave the gift to Elder Pei.
Elder Pei was still very satisfied with Pei Rui as a grandson: "I left you a watermelon."
Pei Rui said, "I want to eat that peach."
The peaches at home have all been eaten. Elder Pei said, "You should try it first."
"Okay." Today is the birthday of Elder Pei. What he asked, Pei Rui will do it. Anyway, if it doesn't taste good, he will just take one bite.
Madam Zhang prepared a small bowl of watermelon; Pei Rui ate a piece, and suddenly shouted: "Ahhhhh, grandpa really loves me." This watermelon was so delicious, as delicious as the peaches!
After the guests left in the evening, Pei Wenshu went directly to the kitchen. Madam Zhang was cleaning up. Seeing Pei Wenshu, she stood up and said, "Master, do you need anything?."
Pei Wenshu: "Cut a watermelon in half for me and send it to the bedroom."
The servant hurried to split it. She was just going to cut one half into smaller pieces, but was stopped by Pei Wenshu. He then took two spoons from the cabinet and walked upstairs.
Soon Madam Zhang help brought the uncut half a watermelon up.
Just after Mrs. Pei took a bath, she saw a big watermelon in front of her husband with two spoons on it.
Pei Wenshu put the watermelon on the table: "Let's eat watermelon."
This afternoon Mrs. Pei accompany the other ladies drinking tea, so she did not taste the fruit Shen Tingshuang sent:"So late, why eat watermelon," plus she has had enough hearing Pei Wenshu praising about the watermelon before sending off the guests.
Pei Wenshu didn't say anything and continued to scoop the watermelon with a spoon.
Mrs. Pei smiled and said, "If you want to eat, why don't you let Madam Zhang cut it?" She sat opposite Pei Wenshu and took a spoon to scoop a small piece of watermelon.
The moment she fed it into her mouth, her eyes lit up: "This is from the little girl?" She also ate the chili at lunch, and naturally saw everyone's appreciative eyes.
Mrs. Pei felt extremely happy when she thought that such delicious fruits and vegetables were only sold in her own supermarket.

Pei Wenshu nodded: "Otherwise, will I tell you to eat."
Mrs. Pei was a figure-conscious person. She has always stopped eating after 8 o'clock in the evening not even drinking water.
Today, she followed Pei Wenshu to finish eating this piece of watermelon.
After Pei Wenshu finished eating, he lay comfortably on the sofa: "This is called life."
...
Pei Rui in the next room also, at ten o'clock in the evening, ran to the kitchen, took two watermelons, and took them back to his bedroom to eat slowly.
While eating, Pei Rui was thinking, it would be nice if he was at home this morning, he really wanted to know what kind of person is be able to grow such delicious fruits.
...
Shen Tingshuang came home, drove the small trailer up to just outside the courtyard, went to water some fruit trees on the mountain, and then went back to take a shower and lied on the bed.
Since changing the bed, Shen Tingshuang has liked to lie down when she was free.
It's comfortable after all.
Tonight, Shen Tingshuang can sleep well, but Shen Xuan was not necessarily so.
After coming out of Pei's house, Fu Letian took Shen Xuan to watch a movie and had a big meal. As a result, Shen Xuan began to smile again, which made Fu Letian felt even more distressed.
After sending Shen Xuan back to Shen's house, Fu Letian did not go home in a hurry, but waited for Shen Tiande to return.
After a busy day, Shen Tiande returned home and found that the young master of the Fu family was also there. He quickly cheered up: "How come Young Master Fu is here today?"
Fu Letian's expression was not good, but he considered that Shen Tiande was also Shen Xuan's father. In a calm tone, he said, "Uncle should take good care of that wild girl."
Shen Tiande quickly reacted. Fu Letian must be referring to Shen Tingshuang: "What did that animal do? It made Young Master Fu unhappy, I apologize in advance."
Fu Letian: "It's not me. Her attitude towards Xuan Xuan is really bad. Xuan Xuan will be the young mistress of the Fu family in the future. How can she have such a sister."
Listening to this, Shen Tiande's face went dark, but after hearing the words "young mistress of the Fu family", his face suddenly brightened: "What is Young Master Fu talking about? That little beast was picked up halfway, Young Master Fu doesn't have to worry, and I will solve this problem."
Shen Xuan said on the side: "This has nothing to do with my sister. Everything I enjoy now belongs to my sister, just leave her alone." Shen Xuan looked at Fu Letian, and her gaze seemed to contain thousands of affections.
After a long time, Shen Xuan made great determination and said with heartache: "My sister has always liked Letian. If I let Letian go, it will make my sister feel better, I..."
-----
The author has something to say:
Elder Pei: Oh my precious chili T-T

Pei Wenshu: I'm so angry, but I still have to keep smiling.
Li family, Lu family: Dang, what should I do if I want to eat more.