After Transmigrating, the Bosses Begged Me to Plant the Land – Chapter 19

Shen Tingshuang can grow a lot of fruits, but her spiritual vein recovery was a secret. If she asked someone to help harvest the fruit, her spiritual energy will be exposed sooner or later.
In the past few days, Lu Minghui and the others still can go up the mountain to help pick the fruits. After this, Shen Tingshuang planned to transport the fruits to the bottom of the mountain by herself, and waited for the super mall to come over and take it away there directly.
Shen Tingshuang: "Should the fruit purchase be restricted?"
After all, her task today requires 1024 people to taste fruit, and tomorrow it will be 2048 people. One day will cost two thousand catties of fruit, and one customer can barely help complete the task if buying one catty.
But the day after tomorrow, 4096 people need to eat their her fruits, the task was very difficult.
In the past few days, she also planted new vegetables and fruits. Except for the rest time at night, as long as the spiritual energy is full during the day, she will go to water.
Some melons and fruits are different from cabbage, cucumbers and peppers which can be fully ripened after one watering, they need to be watered several times.
"Limited purchases?" Lu Minghui was a little puzzled. In normal situation after cooperating with Super Mall, shouldn't she consider how to increase production and sell more?
Shen Tingshuang: "Well, the apricots and peaches tree are limited, they will be gone soon if they are always picked to be sold."
With her current recovery of spiritual veins, these fruits cannot grow indefinitely.
"Can't you consider hiring some people?" There must be many people in the village who know how to farm. Lu Minghui feels that as long as Shen Tingshuang asks, some people should be willing to come.

Shen Tingshuang : "I haven't thought about it for the time being."
Lu Minghui also felt that he could understand this. The fruits grown by Shen Tingshuang are delicious so she must have her own unique techniques. If she hired other people and the taste of the fruits became different it may affect the business.
After thinking about it, the method of restricting purchases is feasible. Lu Minghui: "Okay, then I will respond to the people in the group."
After Lu Minghui went back, he told the company manager about it, and the manager went directly to Pei Wenshu to report.
When Pei Wenshu heard what Shen Tingshuang said, if the apricots and peaches are gone, he will felt uncomfortable. Recently, the fruits of Pei's family are only these apricots and peaches.
After all, after eating these apricots and peaches, eating other fruits will not taste good.
He originally took a lot to Pei's home, but there are also many Pei family members, especially his useless son Pei Rui who can't wait to eat fruit for three meals a day.
After hearing to Shen Tingshuang suggesting that they were almost gone, and the proposed a purchase restriction, Pei Wenshu immediately agreed: "Limited purchase! Each person is limited to one catty."
After thinking about it, Pei Wenshu felt that one catty per person would be too much, and said: "One person is limited to one piece!"
Manager:? ? ?
Did he get it wrong, apricot can only buy one piece? Wouldn't it be too lonely?
The manager confirmed repeatedly, and finally ran out of the office when Pei Wenshu was about to lose his temper.
The manager found Lu Minghui: "The director said, apricots and peaches are restricted."
Lu Minghui nodded, the restriction is right, otherwise the two thousand catties of fruit will definitely not be enough to sell.
The manager glanced at Lu Minghui: "President Pei also said that one person can only buy one piece."
Lu Minghui was stunned. The manager was very satisfied when he saw Lu Minghui's reaction. He thought only him had never seen the world hearing the purchase of one fruit was limited to one piece.
Lu Minghui said: "Salute to President Pei. These apricots and peaches will  be enough until the end of this year."
When Shen Tingshuang said that the apricots and peaches were almost gone, he can't wait to buy all the remaining apricots and peaches from the whole mountain, but it is a pity , he didn't have that ability.
The manager began to doubt himself. Lu Minghui agreed with Pei Dong so quickly. Is this fruit really delicious?
He also knew that new fruits that have been released on Super Mall recently were all well received, but this was very common thing for Super Mall. There was no bad goods on Super Mall.
So the manager has never bought it, and he has never tasted any delicious fruit, let alone apricots and peaches, but he thought of President Pei's reaction.
The manager still picked up the mobile phone to call the person in charge of the supermarket and asked him to send some fruits to the company.
Who knows the person in charge said: "Manager, it's not that I don't want give it to you. In fact, the supermarkets don't have enough supply. These two kinds of fruits will be sold out in less than an hour."
Manager:? ? ?

...
Shen Tingshuang originally wanted to buy bamboo online, but later found out that many bamboos were grown in the village, so she found Shao Feng's house and planned to spend money to buy some.
When Shao Feng's mother heard that Shen Tingshuang wanted to buy it, she only said that she didn't need money.
Shen Tingshuang insisted on giving.
Shao Feng's mother said: "You don't have to give money, it's better to give some fruits you grew. "
"Oh, OK." Shen Tingshuang went to pick two big bags of fruits, and brought a ripe watermelon.
Shao Feng's mother originally thought Shen Tingshuang would bring a maximum of ten catties, but when she saw such a big watermelon, her eyes were smiling: "I'll come help! "
She almost couldn't hold this watermelon, and then looked at the apricots and peaches next to her: "Shuangshuang, you can dig whatever you want. We have a lot of bamboo, and you can have as many as you want."
"Okay, thank you!"
Shen Tingshuang didn't dig randomly, but only enough to filled up the place where Qin Yueze crashed.
...
When Shen Tingshuang was busy, she doesn't have time to take care of the fruits on the table below the mountain.
Now people in the village came to Xin Yuan Shan to buy fruit directly on the table. Choose, then weigh and pay by themselves. You can complete the transaction without Shen Tingshuang.
But Qin Yueze was the one missed the most by Shen Tingshuang, his one bite worth 100 people. When Qin Yueze left, Shen Tingshuang did not ask him for contact information.
Now she wanted to send fruit to him, but can’t find the place to send it.
Shen Tingshuang transplanted the last bamboo and saw a car coming. The car was black. She remembered Qin Yueze’s car. It's also black.
She ran to the foot of the mountain happily. The car really stopped beside Shen Tingshuang, but it was not Qin Yueze who came down.
-----
The author has something to say:
Guess who it is.
Shen Tingshuang: If Qin Yueze did not come again, author you can change the male lead for me.
Ah Qi: I also thought about it. OK. 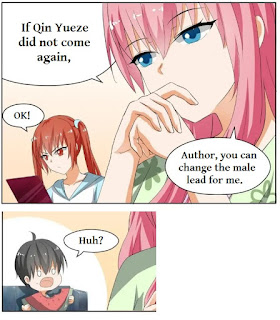