After Transmigrating, the Bosses Begged Me to Plant the Land – Chapter 26

It turned out that Y Express came.

However, it was not the previous courier Old Du who came to deliver the courier today, but another one called Old Deng.

"Your packages have arrived." Old Deng put all Shen Tingshuang's packages at the foot of the mountain.

There were about a dozen packages, all of which were snacks that Shen Tingshuang bought in VIVI live broadcast room yesterday, so not too heavy.

After Old Deng placed the courier at the foot of the mountain, he stood aside and waited. Since Shen Tingshuang would give Old Du peaches, she should also give some to him.

As a result, Old Deng waited for a while, but he didn't see Shen Tingshuang brought anything.

On the contrary, Shen Tingshuang unpacked these couriers and put them in her basket. After finishing the work, seeing that Old Deng was still here, she asked suspiciously: "What's the matter?"

It's just that Old Deng at the foot of the mountain was a little unhappy, why this girl gave Old Du fruit but not him?

Shen Tingshuang who walked back was very happy. Although she didn't get the potato chips, Shen Tingshuang grabbed a lot of other delicious foods, and Qin Yueze also gave away a lot of snacks today.

Shen Tingshuang packed these snacks in the bedroom cabinet and arranged them neatly.

Then, she took out a bag of snail noodles from the cabinet in the middle. Yesterday, in the live broadcast room, when she started buying snacks from VIVI, the comment interface below showed that netizens kept writing the words "snail noodles".

This made Shen Tingshuang quickly remember these three words.

After half an hour, VIVI finally took out the snail noodles, and the comments in the lower left corner brushed faster. 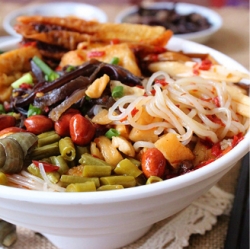 VIVI's assistant brought out five bowls of snail noodles. Together with VIVI, a total of five people appeared in the live broadcast interface.

Some of these five people stood and some were sitting, but they all acted together to eat snail noodles.

VIVI ate a few bites, and kept talking about how delicious this noodle was. After 2 minutes of shouting from netizens, VIVI finally provide the link.

Shen Tingshuang also grabbed a copy, and it was taken off the shelf as soon as it was grabbed. This was the only product in the VIVI live broadcast room last night that was fully stocked at once.

Open a bag of snail noodles, there are many small bags inside, in addition to the vermicelli, there are various condiments and seasonings.

Shen Tingshuang carefully looked at the cooking method on the outer packaging, and began to cook the noodles.

Ten minutes later, she fished out the noodles and began to put the small packets of condiments. When Shen Tingshuang took apart the sour bamboo shoots, her brows were slightly frowned.

Eleven minutes later, she heard the little bird on the roof yelling: "Ah Shuang, are you cooking shit?"

Although the little bird said it was disgusting, Shen Tingshuang still patiently put all the ingredients in the pot, stir evenly, then pull them out, top them with the tofu skins, peanuts, and finally drip chili oil.

There was no table here. Shen Tingshuang directly went outside the courtyard and sat on the stairs below the threshold to eat.

The stench in the bowl was not as big when it was cooked; Shen Tingshuang closed her eyes and fed the noodles into her mouth.

Unexpectedly, this snail noodles smelled bad, but it didn't smell at all when it was fed into the mouth. Her mouth was hot, but Shen Tingshuang doesn't really want to vomit.

The noodles were boiled for ten minutes only so there was no soft feeling. On the contrary, they were a bit chewy. With the taste of sour bamboo shoots, snap beans and tofu skins blended very well, this snail noodles was really delicious.


Shen Tingshuang was afraid of spicy, so she only put half a package of spicy oil. Even so, the taste was still quite spicy. After a while, her entire face turned red.

She ate the noodles while pouting; this bowl of snail noodles was really delicious.

The more she ate, the spicier it became. Shen Tingshuang’s tears came out, but she didn’t want to put down the chopsticks, so she ate a whole bowl of noodles in one breath, and even ate the last remaining fungus.

Put the bowl back in the kitchen, and burped in satisfaction.

The snack Qin Yueze brought over was yogurt. Shen Tingshuang returned to the bedroom, took a bottle from the cabinet, plugged in a straw, and took two sips.

The spiciness in the mouth has disappeared a lot.

After tidying up the kitchen, she listened carefully and decided that she would make sour bamboo shoots and vegetables like beans, and she would also plant them in advance.

Shen Tingshuang took a break, then ran down the mountain and planted the seeds of beans, fungus, radishes, peanuts, and day lily.

Finally, rice is planted, a bowl of snail noodles, the noodles made from rice are the soul.

After finishing all these tasks at around 5 o'clock in the afternoon, the sky was not completely dark yet. Shen Tingshuang also wanted to try live broadcast.

Shao Feng’s mobile phone popped up a notification, he put Shen Tingshuang into the special attention group since he began following Shen Tingshuang, and the system would send a prompt as soon as she updated Weibo.

Shao Feng clicked on Weibo and was immediately excited; he immediately forwarded the live broadcast link of Shen Tingshuang to his followers.

[Feng Ge Street Photography V: The owner of the most beautiful back is on live broadcast. // @ Ah Shuang who Farms:...]

After the repost, Shao Feng even wondered whether to buy a hot search for Shen Tingshuang, but thinking of Shen Xuan and Shen family, Shao Feng decided to give up. There were some things that can't be done too hastily.

He believed that Shen Tingshuang would definitely become popular.

Shen Tingshuang live broadcast was very casual, without changing clothes, wearing a cotton T-shirt and pants. This kind of clothes was loose fitting, one can't see the wearer figure when you wear it, but it is convenient and comfortable. Especially now in summer, she wear long-sleeved clothes for sun protection as it was not that hot yet.

She didn't carefully applied makeup and was barefaced, but she didn’t look obtrusive at all during the live broadcast.

Three minutes after the live broadcast of Shen Tingshuang began, three people came. She switched the camera and waved to the fans that came in: "Good afternoon everyone."

No one responded, Shen Tingshuang didn't care, and switch the camera back. "This is the apricots that Ah Shuang planted on Xin Yuan Shan." While she said that, she picked an apricot.

Shen Tingshuang peeled the apricot, "This apricot has a thin skin and is easy to peel off."

This apricot was already beautiful, but after peeling it you can directly see the golden flesh inside. Shen Tingshuang took a bite.

Shen Tingshuang originally had 100,000 fans on Weibo, and Shao Feng also forwarded it, so within a short while, the live broadcast room exceeded 1,000 viewers.

Many netizens saw the Weibo reposted by Shao Feng and clicked on it.

Xiao Li was an office worker, and after paying attention to Shao Feng, she also wants to learn how to dress.

When she was on the subway going home, she saw the link on Shao Feng's Weibo and clicked on it.

She also knew the most beautiful back photo before, and today she thought that the owner would introduce what to wear, but when she clicked into the live broadcast room, she found it was a girl wearing cotton and linen.

Xiao Li retreated suspiciously and checked the link again. Indeed this girl was picking apricots. The bundles of apricots in the apricot forest looked very seductive.

She didn’t show her face up at all. It was a bit boring. Xiao Li just intended to leave the live broadcast room when she saw the girl picked an oversized apricot, peeled it, took a bite, and its juice splashed out.

Across the screen, she seemed to be able to smell the scent of apricots.

As a result, she looked in the lower left corner and didn't see any product link. Nowadays, live broadcast will always sell goods, why can't the link be found in this live broadcast?

There were not a few netizens who were as confused as Xiao Li, and they have all started to comment.

[Sister, how do you sell this apricot?]

[Ahhhhhhh, I want to eat apricots!]

[Obviously I just had dinner, why I still feel hungry?]

[You ate dinner, I am still on my way home from work.]

Shen Tingshuang finished eating an apricot and found a lot of comments, so she replied to the camera.

"I sell fruits here at Xin Yuan Shan. If you can come if it’s nearby, don't come if you are from the city. The fare is expensive."

"But if you like it, I can give a lottery, but I still don’t know how to do this lottery."

The netizens who came to watch the live broadcast were immediately anxious.

[Look at the lower right corner.]

Under the guidance of netizens, Shen Tingshuang found the lottery option, but because her level was too low, she couldn't draw any.

"How about this, if you want to eat, send me a private address later, and I will send them to you, and I will draw the lottery tomorrow."

Shen Tingshuang spoke very sincerely to the camera, especially the apology in those big eyes. Netizens who were irritated by not being able to join the lottery will send comments for comfort.

Shen Tingshuang saw that everyone did not blame her, "So, everyone can leave their address first, and now I will take everyone to see the peach forest."

She quickly walked to the peach forest: "This peach is also very delicious." She picked a peach and took a bite.

[Originally, I said I didn’t want to send my address, but now I want to.]

[Apricot I am not interested, but peach I do.]

[This peach is so big; I thought it must not delicious, but on bite that Ah Shuang did, I actually feel it must be sweet and juicy!]

Shen Tingshuang finished eating the fruit, and then said to the netizens: "Today's live broadcast is over. If you want to eat apricots, remember to leave the address, and I will send it to you later. Bye."

Shao Feng looked at his screen after the live broadcast. He didn't expect Shen Tingshuang's live broadcast to be so short. It ended in half an hour.

But it was quite attractive. Shao Feng quit the live broadcast and drove back.

The system released the task at 5 o’clock sharp: "Please the host let 32768 people eat the fruits you grow within 19 hours."

Shen Tingshuang sat up with dark circles under her eyes, put on her clothes, ran to the fruit forest and started picking fruits. She asked her viewer to leave their address yesterday. There are actually 233 netizens in total and she finished writing a copy of the addresses near midnight.


This was not what makes Shen Tingshuang resentful. What she resents was that she missed the live broadcast of VIVI, and she had to get up early in the morning to pick fruits.