After Transmigrating, the Bosses Begged Me to Plant the Land - Chapter 2

The man driving was called Shao Feng. After he took the apricots home, he couldn't wait to eat one, and the scent filled his living room.

Take a bite, tender, juicy, sweet and full of taste!

Sure enough, the taste was exactly the same as he had imagined, and the whole apricot was quickly eaten.

Apart from delicious, he couldn't even find other words to describe it.

Shao Feng’s mother was busy in the backyard. She saw Shao Feng coming back as soon as she returned to the living room. She didn’t know what her son was eating, but he looked relished. Upon closer inspection, it turned out to be apricots. They looked better than what she had grown: "Where did they come from?"

Shao Feng was very eager and cannot wait to continue to eat the second apricots, and his mother seeing him like this, express some dislike, "You act like you never eat apricots."

Shao Feng’s mother felt dissatisfaction with the attitude of her son: "How different can it be, apricot is still apricot"

The scent of the apricot is more intense, and Shao Feng's mother's nagging voice become quieter, "This apricot, same as what I have eaten my whole life and the taste must be nothing special."

Shao Feng has peeled the apricots and passed them directly to his mother.

Shao Feng’s mother didn’t answer, "I won’t eat it, and it’s not a rare thing!"

Shao Feng stood up and stuffed the apricots into his mother’s mouth. He felt like he was wasting eating time if he said one more word. Apricot eating time.

Shao Feng's mother went to find the other half of the apricot subconsciously; she looked up and saw Shao Feng looking at herself with a smile on his face.

Shao Feng's mother looked a little embarrassed. She took the other half of the apricot in Shao Feng's hand and ate it in one bite. That refreshing feeling came again. Why can an apricot bring such pleasure?

This one apricot can't solve her gluttony at all, and the drool in Shao Feng's mother's mouth doesn't know whether it is the gluttonous water from the apricot just now or the gluttonous drool left behind.

At this moment, Shao Feng's mother had to admit that there were apricots grown in her house, but the taste was a little different. To be precise, the difference was far.

Soon, the whole living room quieted down, leaving only the sound of two people eating apricots.

There were not many apricots, and they were eaten up soon. They felt distressed when they saw the skins thrown in the trash can. You know, the skins of apricots are also edible!

Thinking of this, the two picked up the apricot pits on the table and found a hammer to smash them open.

Well, the kernels on apricot pits are also edible. (TN: Eating apricot kernels safety is still debatable according to many experts. Some claim many benefits while the other swears by its toxicity. Please do your own research and do not try if you are unsure. Source)

After finally finishing this task, Shen Tingshuang returned to her apricot tree, ready to pour spiritual energy again, when her phone on the side rang.

As a ginseng spirit, which has lived for tens of thousands of years, she has never used a mobile phone. After transmigrating, she feels that mobile phone is very strange. In addition, in the original owner’s memory, it is something you carry everywhere.

Therefore, when she left Shen family in the middle of the night, Shen Tingshuang took her phone with her.

"Dad" is displayed on the phone.


Shen Tingshuang frowned and pressed to answer. Before speaking, she heard the roar from the phone: "Shen Tingshuang, what trouble are you doing?"

"I'm not making trouble?" Shen Tingshuang was a bit astounded. She was tired after a whole day doing task, and now she just wants to rest, how can she have the energy to make trouble?

"You ran away from home is not making trouble? Yesterday was clearly your fault. You do not need to apologize to your sister. Just come back here."

Shen Tingshuang frowned slightly. According to yesterday's experience, maybe the system will release the task again in the middle of the night. In terms of difficulty, the next task is potentially more difficult than the previous one. Going back to Shen’s house, the task will definitely fail: "I’m not coming back."

Father Shen was very angry, "You won’t come back? I’ll tell you, if you don’t come back, I will toss all the clothes in your room!"

"I'm not coming back." Shen Tingshuang hung up the phone, why did she have to repeat it twice? Isn't she talking human words?

There are also those clothes, which Shen Tingshuang saw when packing up before leaving. They were all weird-shaped and weird-colored clothes. They were also clothes that the original owner uses to attract the attention of her parents.

It is also the clothes that the original owner wanted to get rid of.

Father Shen didn't expect his phone to be hung up, and his face was full of anger. Shen Tingshuang dared to disobey him and hung up his phone!

"Shen Tingshuang, you dare to run and hang up my phone!" If Shen Tingshuang was present, the furious Father Shen would probably beat her wildly.

Shen Xuan looked at the furious father Shen and whispered in a low voice: "Dad, don't be angry, sister should be back in a few days."

Father Shen looked at such a gentle Shen Xuan, and the anger in his heart dissipated a lot. "It would be nice if your sister could be even half of you." Shen Xuan was obedient, her personality gentle, not deviant as Shen Tingshuang, where she can’t be taken anywhere.

"You are worried about what she does. Meanwhile look at her, there is no such thing as worry for you as her sister."

As far as Father Shen was concerned, Shen Tingshuang had not yet left the society, and she had been relying on family support for her spending. If Shen Tingshuang's card was cut off, she would definitely return.

Hanging up the phone, Shen Tingshuang changed Shen's father's contact name to "Shen family’s little broken boy", and did not forget to whisper: "Naive, dare to ask me call you father."

After her spiritual vein was restored 2%, her whole person has a little more energy. Shen Tingshuang watered the apricot tree, moved her muscles, and then carried the basket and walked towards the east slope of the mountain.

When she came in the early morning, she looked for edible fruits and finally found this apricot forest.

It was still early, and Shen Tingshuang pulled out the weeds around the apricot tree, took some hay, spread it on the ground, and lied on it for a while.

She slept on the soft bed for one night when she first transmigrated and now slept on grass. She was a little unaccustomed at the beginning. As expected, it is easy to change from frugality to luxury, and it is difficult to change from luxury to frugality.

Therefore, Shen Tingshuang now planned to rest in the courtyard she found on the other side of east slope of her mountain. 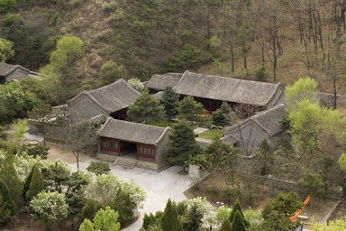 In the early hours of the morning, the task was urgent. Shen Tingshuang did not go in after discovering the courtyard. Right now, the system has not yet released the task, and Shen Ting Shuang has enough time.


From the outside, the courtyard was very large. The lock outside was covered with rust. Shen Tingshuang pushed it gently and the lock fell on the ground. As soon as the door opened, all you could see was spider webs.

Shen Tingshuang put the basket aside, picked up a dead branch on the ground, raised her foot and walked in, sweeping the cobwebs in the courtyard while at it.

The inner courtyard alone is huge. There are not only flower beds but also parking spaces, but the plants planted in the flower beds can no longer be seen, and only a few dead branches lie there.

After initially clearing the spider webs, Shen Tingshuang picked up the broom lying in the corner and cleaned the entire courtyard.

Generally speaking, courtyard houses are mostly in the pattern of sitting north facing south, and this courtyard house is built on the east slope of the mountain.

Not to mention the size of the house. It took Shen Ting Shuang for more than two hours to simply clean out the dust in the courtyard. This is still helped by the power of her spiritual veins.

On the south side is the main house. It should be the place where the original owner’s maternal grandmother lived. There are living room, bedroom, kitchen and other small room. Most of the rooms are empty.

There are also rooms on the west and east side houses, which are smaller than those on the south side, but they also have complete facilities.

There are warehouses in the south room, but there is nothing in it, there are only a few packs of plant seeds that cannot be identified.

Shen Tingshuang guessed that it was probably during the years when the original owner’s maternal grandmother was gone, someone came up and took away the contents of the house.

Shen Tingshuang cleared the dust outside the door and piled it up, and went to the main house in the north. The sun had already set, and Shen Tingshuang pressed the switch at the door, but she did not expect that the lights would turn on.

The shower in the bathroom is no longer functioning. There are two stoves in the kitchen, one using gas, which can no longer be used, and the other is wood stove, but there is no firewood in the kitchen.

There was a lighter next to the wood stove, and after trying carefully, it could still ignite.

Shen Tingshuang went to pick up some dead branches outside the door and started to light a fire and boil water.

In the bedroom, all the original duvet covers were removed and placed outside the door.

After scrubbing the bed with a rag several times, spread a few sheets on it, and the sleeping area is set up.

Shen Tingshuang sighed. She had brought the sheets from Shen's family and now that these are used, she ran outside the courtyard, washed the apricots left over from today, cut them in half, and dried them in the yard.

After finishing all this, the water was almost boiled, Shen Tingshuang took it to take a bath, and then lied down. Although there is no mattress, sleeping like this is more comfortable than just sleeping on the grass.


It was midnight again, and the mechanical sound once again sounded, "Please let 4 people eat the fruits you grow within 12 hours."

Ginseng spirit: The system wants to kill me!

Author: It dare not.

Hello! If you enjoy my work, please consider sending this mtl-er some ko-fi. =)