After Transmigrating, the Bosses Begged Me to Plant the Land – Chapter 11

When Shen Tingshuang arrived at Shen's house, Shen Xuan happened to be at home, and there were other people in the house. Everyone seemed to be busy arranging something.

Seeing Shen Tingshuang came back, they were all staring.

Shen Xuan saw Shen Tingshuang, her eyes were a little surprised: "Sister, you are finally willing to come back. Mom and Dad miss you very much."

Shen Tingshuang looked at Shen Xuan expressionlessly: "Why did you ask Bailian to cut Xin my fruits?" Shen Xuan felt a little proud, but she shook her head: "Sister, you misunderstood me. I never ask Bailian to take off your fruits..."

Shen Tingshuang was too lazy to talk nonsense with Shen Xuan: "Okay, I'm just here to tell you..."

Before she finished speaking, Shen Tingshuang heard the sound of opening the door outside,  turned her headand at the same time there was a "pop" sound.

Shen Tingshuang turned her head back and found Shen Xuan sitting on the ground, clutching her right face.

Shen Xuan lowered her face; no one could see her expression. She knew that there was a distinguished guest coming from home today, and Father Shen and Mother Shen would definitely come back early.

Father Shen saw Shen Tingshuang standing in front of Shen Xuan, and saw Shen Xuan sitting on the ground, covering his left face: "Shen Tingshuang, I didn't expect you to be so vicious at your young age!"

"Quickly apologize to your sister!" The successive roars made people see that Father Shen had no affection for Shen Tingshuang.

"Xuan Xuan, are you okay?" Mother Shen helped Shen Xuan up and glanced at the Shen Tingshuang, with a look of disapproval in her eyes.

These three people stood in a row, as if a family were fighting with the same enemy.

And their enemy is Shen Tingshuang.

As a ginseng that has lived for thousands of years, what she hates most was being wronged. Now her spiritual veins have recovered 8%, so just a little bit of energy will have a lot of strength.

"Slap!" Shen Tingshuang stepped forward and slaps Shen Xuan casually, but in fact this slap contained a lot of power. 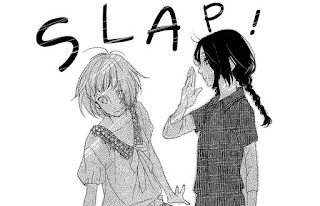 Shen Xuan only felt that her head was dizzy, and there was a smell of blood in her mouth. Shen Tingshuang's slap used her full strength, but it looked from the outside that she didn't use any strength at all!

Father Shen and Mother Shen did not expect that Shen Tingshuang would suddenly hit someone. After Shen Tingshuang was picked back home, although she did not get along with Shen Xuan, she never raised her hand before.

For a time, Shen's father and Shen's mother did not react.

"Since you said I hit you, then I have to take it seriously." Shen Tingshuang passed the three of them and walked towards her bedroom. After a few steps, she suddenly turned back, "Not to mention, you slapping yourself is not the same as someone else slapping you my good sister."

In order to make Shen's father and Shen mother believe in her, Shen Xuan's own slap was not weak, so there was still a red mark, but the thumb mark was at the bottom.

It was completely different from Shen Tingshuang's slap where the thumb was at the top.

Shen Xuan covered her face again, crying and ran back to her room. When she passed by Shen Tingshuang, she seemed to want to hit Shen Tingshuang’s shoulder. However, Shen Tingshuang was like a rock, Shen Xuan was bounced to the ground by the rebound force.

"Tsk tsk tsk." Shen Tingshuang despised it even more. Shen Xuan was not ashamed to dare to get it in front of her with such tricks.


In addition to teaching Shen Xuan, Shen Tingshuang also plans to pack a few sets of quilts and take them back to Xin Yuan Shan. She always feels the quilt here is comfortable.

In addition, a wounded person came today, so she couldn't sleep in the bed at night. She had to prepare a comfortable nest for herself.

After receiving the luggage, Shen Tingshuang took a big tartan bag and went downstairs, but found a bunch of people sitting downstairs.

Father Shen changed his usual arrogance and sat on the sofa very modestly at the moment.

Shen Tingshuang took the bag and walked downstairs. She ignored everyone and opened the door directly.

An old man stood just outside preparing to come in, his eyes lit up when Shen Tingshuang opened the door: "Girl, did you know I'm coming?"

Shen Tingshuang shook her head: "I just want to go out."

Father Shen and the others came to the door immediately after hearing the sound. They are ready to say hello, but found  the old man said: "Why are you going out, I am here today to look for you."

On the first day after transmigrating to the book, Shen Tingshuang used Hawthorn to save an old man who suffered heatstroke in order to complete the first task.

No one thought that this old man belonged to Pei's family.

It was also a coincidence that Elder Pei went out by car but an accident occurred at the driver's house that day, so Elder Pei asked the driver to leave with the car first.

Anyway, it’s not far from home. Elder Pei intends to walk back by himself, but although the distance was not far away, but the temperature was high. When he walks, he has a heat stroke.

That day when the old man regained consciousness, he only saw Shen Tingshuang leave, so he began to ask his son Pei Wenshu to find the girl who saved him.

After Pei Wenshu heard the incident, he took his old father to the hospital for a medical examination, and at the same time ordered his secretary to find out who saved his father.

After finding out, the Pei family must sent their gratitude.

After searching in many ways, the secretary told Pei Wenshu that it was a girl from the Shen family who saved his father.

Ordinarily, after finding the girl, he should come to Shen's house to thank her as soon as possible, but the physical examination of Elder Pei in the hospital has not yet ended, so Pei Wenshu insisted on waiting for his father to come to the door to thank her personally after the examination was over.

During this period, it happened that Pei Wenshu had a project to discuss at the office, and it was delayed until today.

Yesterday Pei Wenshu called Shen Tiande to say that they will come to thank you today, so Shen Tiande started preparing early in the morning.

When the company's affairs were finished, Pei Wenshu came directly to Shen's house with the thank-you gift.

Elder Pei also wanted to choose some thank-you gifts on his own and so he was a little late.

Shen Xuan knew about this yesterday. She didn't remember saving Elder Pei, but she did not think that Elder Pei was saved by Shen Tingshuang either. So when Father Shen asked about it yesterday, Shen Xuan answered ambiguously.

Therefore, both Father Shen and Mother Shen believed that it was Shen Xuan who saved Elder Pei.

So when Pei Wenshu arrived at Shen's house, he also thought that Shen Xuan was the one that has rescued his father.

In addition, when he said the words of gratitude, Shen Tiande did not raise any objections.

As a result, now Elder Pei came over and said that the one he was looking for was Shen Tingshuang?

Father Shen glanced at Shen Tingshuang, how can she save Elder Pei with her virtue?


The author has something to say:

Elder Pei took a look at Father Shen: With your virtue, how can you be the father of Tingshuang?