After Transmigrating, the Bosses Begged Me to Plant the Land – Chapter 38

Shen Tingshuang intended to start with the grapes behind the courtyard. The grapes trellis was full of layers of grapes: "This is it, delicious grapes." 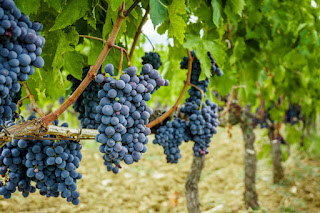 [This grape is so big!]
[Sitting under the vines, I feel refreshed and crooked.]
[But it’s only August now, why are the grapes ripe?]
[Now it is different from before. There are a lot of off-season planting. Besides, grapes normally ripen in September, which is only one month away.]
......
Shen Tingshuang picked a grape and placed it in front of the camera: "It's quite sweet." After speaking, a small opening was peeled from the top of the grape, revealing the crystal clear grape flesh inside.
Shen Tingshuang tool a bite, and then spit out the seed inside.
The taste of this grapes was very sweet, no sour taste at all.
[I want to eat grapes too.]
[At this time, I took a look, and there are no grapes in the surrounding supermarkets.]
[Secretly tell you that there are grapes on the shelves of Miss Sister’s treasure shop.]
[? ? ]
[F*ck! It's in stock?]
......
Shen Tingshuang saw the comments: "Well, today there are fruit grapes in stock, but the purchase limited to 200 grams per person, grapes were easily damaged, so temporarily only people in City B can buy"
[...... Critical Hit.]
[For this grape, I think I can move to City B.]
[Yes! it's finally on the shelves, I'll go buy some fruit first.]
...
Some netizens went to Shen Tingshuang's shop.
Shen Tingshuang was doing live broadcast alone, she did not put direct purchase link on the room, and only put the treasure shop link in the lower left corner.
After eating the grapes, Shen Tingshuang came to the magnolia berry tree: "Has anyone eaten this kind of fruit?"
[Looks like grapes, but redder than grapes.]
[And it is also in small bunch, still growing on the tree.]
[Children in the mountains must have the answer, this is magnolia beery!]
...
"Yes, it is magnolia berry." Shen Tingshuang put her phone aside, quickly climbed the tree, and picked a bunch of berries.
The netizens in front of the screen were once again stunned.
The comment interface was suddenly very clean, one minute later......
[! ! !]
[Miss Sister is too mighty!]
[This tree-climbing action!]
[Miss Sister, have you considered acting in a fairy movie?]
[I have already made up a big show!]
Shen Tingshuang has put the magnolia berries in front of the camera.
The red, round fruits instantly attracted the attention of netizens.
Shen Tingshuang fed it into her mouth: "Magnolia berry not as sweet as grapes, but also not sour, its a good fruit."
"Magnolia berry can also be used as medicine, as pain killer and insomnia reliever can be eaten."
As there were not many magnolia berry, soon after Shen Ting Shuang finished eating them, she threw the peel under the tree. After watering with spiritual energy, these can be used as fertilizer even if they were only fruit peels.
[I want to eat.]
[I just watched it and it is sold out in our area. What does this mean?]
…
Shen Tingshuang explained: “This is the same as grapes, only sold in B City.”
[…]
[No, I will move to b city tomorrow.]
[I also decided to take the university in B City.]
…
Shen Tingshuang: "I have shown the Chinese bayberry before, so let’s take a look at the kiwi fruit today."
Kiwi tree was not as tall as the magnolia berry tree. The fruits were nestled among the leaves. If from far away, you could not see them at all, but if you look closely, you would find that the kiwis in the two fields were nestled in clusters. 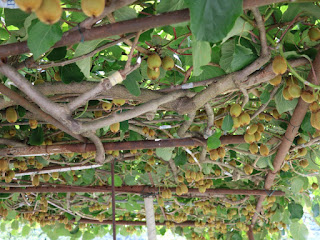 At three o'clock in the afternoon, Old Du was already dragging the fourth car full of fruit back to his company. He wondered whether he could apply for a bigger car with the company tomorrow.
Shen Tingshuang was too tired today, picking fruits, watering with spiritual energy, continuing to pick fruits and then watering again. When she watched Old Du drove the fruit away for the fourth time, Shen Tingshuang sat directly under the bamboo forest.
Today was really not ordinary tiring.
However, something more tiring has yet to come.
...
Shen Tingshuang took a break, then ran to the mountain to continue farming.
At the foot of Xin Yuan Shan, a police car stopped at the Shen Tingshuang's booth. There were three policemen in the car. The one who drove was the first to ask: "Is this right?"
The older policeman sitting in the passenger seat said: "This should be it. The mountain shown on the map is Xin Yuan Shan. Fruits were sold nearby."
The policeman who drove turned to the right and walked up the mountain along the stall, except that the place was set with a formation by Shen Tingshuang so the police car can’t get up.
Soon, the older policeman in the car discovered what was wrong: "Wait, we seem to be spinning around the same place."
The other two were talking, but when they heard the older policeman, they immediately silenced.
There was also a young policeman in the car who had only been working for a few months. The first time he saw such a situation, his face turned pale with fright.
After another distance, the policeman who drove whispered: "It's really a ghost hit the wall."
As a result, once the voice fell, the car started going uphill.
Three policemen: "?"
......
Shen Tingshuang heard the little bird in the mountain saying that a police car had arrived down the mountain.
She didn't know why the police car came to Xin Yuan Shan, but she broke the formation and let the police car came up.
……
The policemen looked at each other, and the one who drove asked: "What should I do?"
"Go up!" The older police was not afraid of this, so they decided to go up and have a look.
…
When the police car arrived next to Shen Tingshuang, Shen Tingshuang was sowing cauliflower seeds. 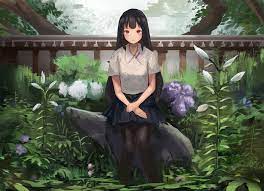 Sitting in the car, the young policeman subconsciously asked: "Is she a human or a ghost?"
<< Previous chapter | Next chapter >>