After Transmigrating, the Bosses Begged Me to Plant the Land – Chapter 35 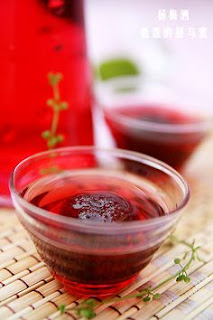 Bayberry Juice
She washed the pot used for the Chinese bayberry and added water to boil it.
As the color of the trotters and the soup in the pot gradually became thick, Shen Tingshuang poured the boiling water into the pot, and then put the remaining ginger slices into it.
[Miss sister, do you not add spices?]
[Yes, I think other people’s elbows are all spiced.]
[I also think that adding bay leaves and cinnamon will taste better.]
[But this color is really beautiful.]
……
Until the final trotters soaked up the juice, Shen Tingshuang didn't add any other seasonings. On the contrary, when it was about to come out of the pot, Shen Tingshuang sprinkled a handful of the scallion on the trotters.
She then scooped up the thick soup, poured it on the trotters, repeat it several times, and serve it out.
The caramel colored trotters and green onions look particularly appetizing. 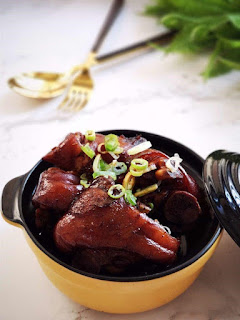 After the three followed Shen Tingshuang, they found that the courtyard was also very beautiful. Although the vegetables were grown in it, it did not violate the harmony at all.
The person in the lead asked: "Which room to start with?"
Shen Tingshuang: "It's here."
"If you want to install all of them, you should start with the least used room." The southernmost part of the courtyard was the warehouse. Shen Tingshuang also bought wall coverings of the same color.
Shen Tingshuang has no opinion.
The three of them first moved out the contents of the warehouse, only to find that there were not many things in it, only some cabinets.
It's just that the cabinets were old and the wood was quite good, which also makes these cabinets extra heavy, especially when they were still set up together.
The three of them carried the cabinet and moved weirdly, only able to move a few centimeters after a long time.
...
Shen Tingshuang sighed and lifted the cabinet on one side, then said faintly: "You three lift the other side."
The three people were horrified to find that Shen Tingshuang lifted the cabinet with ease. If they hadn't been carrying the cabinet earlier, they would have thought that Shen Tingshuang was lifting foam board!
As they walked out, the three big men were even more shocked to find that Shen Tingshuang's strength seemed to be greater than their three big men combined.
As for the other small cabinets, when the three big men lifted one together, Shen Tingshuang picked one up by herself and placed it outside the courtyard.
Three people: "..." I feel embarassed.
......
Shen Tingshuang looked at the cabinets moved outside the courtyard, they were not so good-looking, and she planned to make a new one by herself.
After the room was emptied, they began to clean the walls and then scrape the old wallpaper of. Shen Tingshuang watched from the side. After the three staffs finished scraping old wallpapers off, the three of them began working for the installation. One applied the glue, the other two cut the paper, and then the three of them began to paste the paper onto the glued wall.
During the pasting process, Shen Tingshuang also noticed the movements of their hands, to ensure that there were no bubbles, and they had to scrape the paper on.
After she saw them finishing one wall, Shen Tingshuang went to the next room. She moved the contents out into the yard and began to scrape the old papers.
When the three of them finished installing the wallpaper in the first room, they found that Shen Tingshuang had already vacated the other room, and the wall had been scraped.
Three people: "?" Scraping old wallpaper was not a simple job, why this girl done it so easily.
After they took a closer look, they found that the girl has done a very good work. One of the three began to apply glue, and the other two began to cut the wallpaper after measuring.
When they were finished with the dining room, they found that Shen Tingshuang had already prepared the other two rooms.
Three people: "???" Was she trying to grab our job?
However, it seems that if this customer wanted to grab a job with them, they couldn't keep it at all!
...
Finally, watching Shen Tingshuang worked faster and better, one of the staff couldn't help but ask: "Have you done this before?"
Shen Tingshuang shook her head: "No, done it for the first time."
The other two glared at the interrogator, with warnings in their eyes. When these words were asked, wouldn't it be obvious that they could make the customer uncomfortable?
The person who was speaking was also a little speechless, and he really blamed his cheap mouth.
<< Previous chapter | Next chapter >>